Kumkum-induced allergic contact dermatitis: Are we missing the actual culprit?

Background: Kumkum, made with turmeric and slaked lime along with colour enhancing dyes is known to cause allergic contact dermatitis. The possible contact allergens in kumkum include turmeric, Sudan-1, 4-aminoazobenzene, brilliant lake red R and cananga oil. We report patch test results among patients with suspected contact hypersensitivity to kumkum.
Objective: To identify the allergen causing kumkum induced allergic contact dermatitis by patch testing and to advise patients about organic kumkum which doesnot contain colour enhancing dyes.
Methods: Eighteen patients with suspected contact hypersensitivity to kumkum were patch tested with undiluted kumkum, undiluted turmeric, Sudan-1 (95%), 4-aminoazobenzene and allergens of the Indian Standard Series.
Results: Of the 18 patients, 14 patients had patch test positivity to kumkum and 4 had a negative reaction to kumkum. Patch test with other suspected contact allergens showed positive reaction to turmeric in 4 patients, Sudan-1 in 3 patients and 4-aminoazobenzene in 2 patients. Among the allergens of the Indian Standard Series, positivity to nickel and fragrance mix was seen in 5 and 2 patients respectively. Positive reaction to PPD, chlorocresol and parthenium was seen in 1 patient each.
Limitation: Small sample size.
Conclusion: Allergic contact dermatitis to kumkum occurs both due to the dyes (added for enhancing the colour) and turmeric. All patients with suspected allergic contact dermatitis should be patch tested with kumkum, turmeric and dyes, based on which alternative non-allergic material could be advised. Kumkum dermatitis can also occur due to various other allergens, for which too patch testing should be done.
Keywords: 4-Aminoazobenzene, kumkum, Sudan-1, turmeric

Kumkum is commonly used for social and religious reasons in India and is available as a powder or liquid.[1] It is applied over the forehead by both men and women.[2],[3] However, women use it more frequently; in addition to the forehead, it is applied over the parting area of hair (vermillion) by married women as a sign of their marital status. It also comes in contact with the intermammary area following its application over the “mangalsutra.” It is a scarlet red mixture of dried turmeric and slaked lime along with color-enhancing dyes.[4]

The purpose of this study is to identify the possible allergen(s) causing allergic contact dermatitis to kumkum and to advise patients about organic kumkum.

Eighteen patients with pruritus, erythema, papules, vesicles, pigmentation, or scaling over and around the site of kumkum application were studied in the Department of Dermatology, PSG Institute of Medical Sciences and Research, Coimbatore, Tamil Nadu, India. Detailed history regarding the duration of symptoms, involvement of various sites, and other medical history was recorded. Patients on systemic corticosteroids, immunosuppressives, pregnant, and lactating females were excluded from the study. 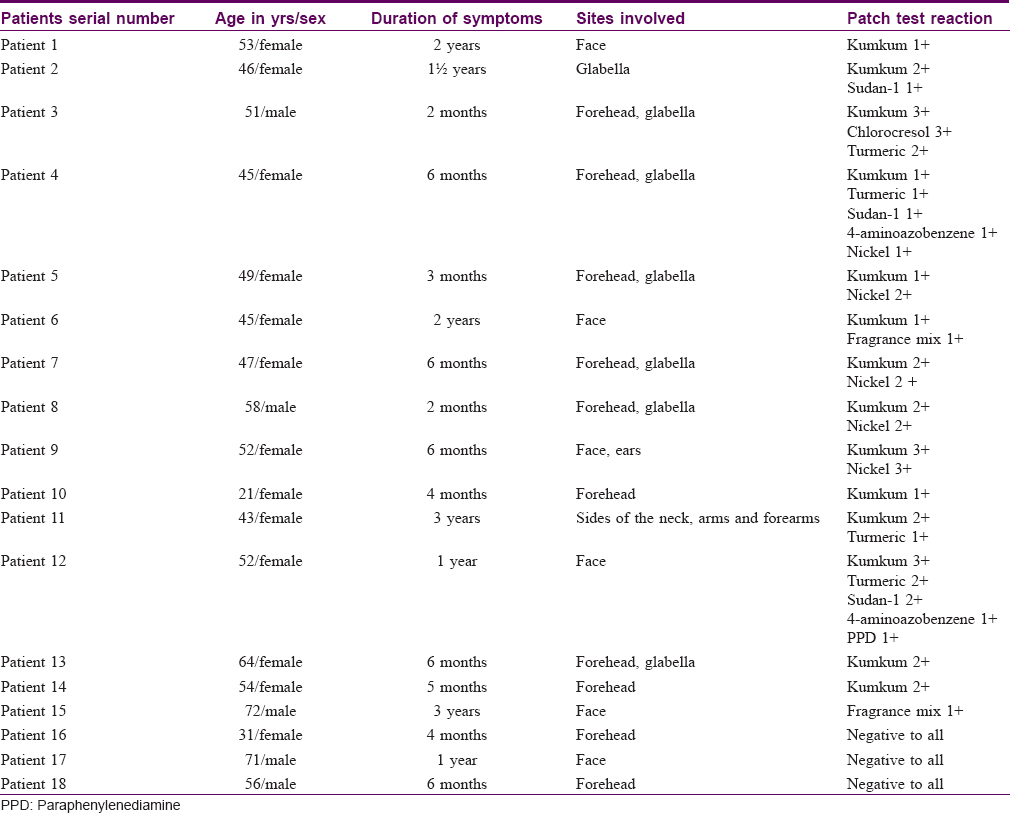 Patch test with suspected contact allergens in kumkum revealed positive reaction to turmeric in 4 patients, Sudan-1 in 3 patients, and 4-aminoazobenzene in 2 patients.

Among the allergens of the Indian Standard Series, positivity to nickel and fragrance mix was seen in 5 and 2 patients, respectively. Positivity to paraphenylenediamine (PPD) and chlorocresol was seen in 1 patient each. Three patients showed positive reaction to multiple allergens (>2), including kumkum itself [Figure - 4]. Patch test did not show positive reaction to allergens of Indian Standard Series and kumkum (and its components) in 3 (16.7%) patients.

Kumkum-induced allergic contact dermatitis was seen in 14 patients involving both the sexes, with a female preponderance. Males, to an extent, can refrain from using kumkum but it is difficult for females to discontinue the use of kumkum due to social and religious obligations. The dermatitis is unlikely to subside unless the exposure to allergen is completely discontinued.

Turmeric (curcumin) showed positive reaction in 4 patients. It is applied over the entire face and limbs by many people, as it is believed to have anti-acne properties and to reduce the growth of hair.[5],[6] Kumkum positivity in some patients could be a result of reactivity to turmeric, as it is the major ingredient of kumkum. Sudan-1 and 4-aminoazobenzene, which are the color enhancing dyes used in kumkum, showed positive patch test reactions in 3 and 2 patients, respectively.

Among the allergens of the Indian Standard Series, nickel positivity was seen in 5 patients. Dermatitis in these patients could have been either due to direct contamination or as a contaminant from the metal tins used to store kumkum or from ear rings.[7],[8] However, none of them had history of ear-ring dermatitis. Dermatitis in 2 patients who were positive to fragrance mix could have been due to the addition of fragrance to kumkum since fragrances are added to many cosmetics [9] and reaction in patients positive to chlorocresol could have been due to the use of topicals containing the preservative.[10] Identifying allergens in the patients who showed positivity to kumkum alone is also of utmost importance.

We plan to conduct further studies where we intend to observe the patch test sites for the development of pigmentation and perform photo patch testing on as many components of kumkum as are known to cause photo allergic reactions.[11]

The only limitation of this study was its small sample size.

The authors would like to highlight the fact that the diagnosis of kumkum dermatitis is the starting of the quest to find the actual culprit causing dermatitis. It is of utmost necessity that the patients are precisely diagnosed and provided with other nonallergenic or organic kumkum after patch testing.

The authors certify that they have obtained allappropriate patient consent forms. In the form, thepatientshave given their consent for their images and other clinical information to be reported in the journal. The patients understand that their names and initials will not be published and due efforts will be made to conceal their identity, but anonymity cannot be guaranteed.