Levamisole: A multi-faceted drug in dermatology

Levamisole is a synthetic antihelminthic belonging to the class of imidazothiazole derivatives, possessing potent immunomodulatory activity. It has been extensively used in dermatology practice for the management of various dermatoses ranging from infections such as warts and leprosy to inflammatory dermatoses such as lichen planus and Behcet′s disease [Table - 1]. [1],[2] 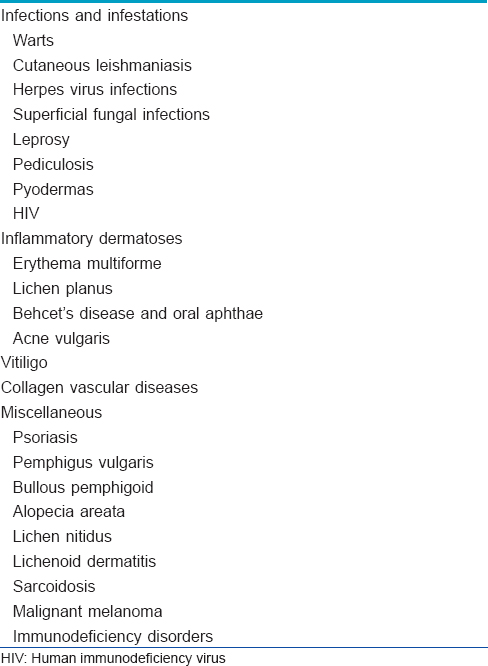 Levamisole, the levo-isomer of tetramisole, is readily soluble in water and is rapidly absorbed from the gastro intestinal tract; peak blood levels are achieved after 1.5-4 h. Its plasma half-life is 16 h and it is metabolized mainly in the liver. [1],[3] Usually, it is administered at a dose of 150 mg/day for 2-4 days each week but for the management of malignancies or immunodeficiencies a higher dose or prolonged treatment regimens are recommended. [1],[4]

Levamisole exerts its antihelminthic activity by acting as a nicotinic acetylcholine receptor agonist. [3] It possesses a wide range of immunomodulatory properties and mainly acts on macrophages and T-lymphocytes augmenting their functions such as phagocytosis, chemotaxis, adherence, intracellular killing, E-rosette formation, delayed skin hypersensitivity and antigen-induced proliferation. Levamisole seems to have a preferential effect on T helper-1 cells with subsequent upregulation of interleukin-2, interleukin-12 and interferon-γ. It has also been demonstrated to inhibit the action of endogenous immunosuppressive factors like soluble immune response suppressor. Elevated B-cell activity is also inhibited by levamisole as indicated by reduced immunoglobulin G, immunoglobulin M and circulating immune complex levels. [5],[6],[7] The drug possesses anti-anergic properties restoring depressed immune responses with only marginal effects in immunologically competent individuals.

The various therapeutic uses of levamisole in dermatology practice are reviewed below.

Warts are a common dermatological problem caused by the human papillomavirus, with numerous treatment modalities available. Levamisole has been used in combination with cimetidine for the management of recalcitrant warts. In a double-blind comparative trial, the efficacy of a combination of cimetidine and levamisole was compared with cimetidine alone in 48 patients with multiple recalcitrant warts. [8] The patients were divided into two groups, one receiving oral cimetidine alone in a dose of 30 mg/kg/day orally in three divided doses up to a maximum of 3 g/day and the other receiving levamisole 150 mg tablets on 2 consecutive days a week, in addition to cimetidine. After 12 weeks of therapy, 75% of patients in the combination therapy group showed marked to complete response, compared to 41.6% of patients in the cimetidine-only group. The average regression periods were 7 and 10 weeks respectively. In another similar study on 44 children with multiple recalcitrant warts, complete response was observed in 65% of patients on levamisole plus cimetidine and in only 31.5% of those on cimetidine alone after 12 weeks of therapy. [9] However, some randomized controlled trials failed to find any statistically significant improvement with levamisole in the treatment of multiple viral warts. [10],[11]

Cutaneous leishmaniasis, caused by parasites of Leishmania spp., causes significant morbidity due to its long clinical course and residual scarring. Levamisole has been reported to be effective and safe in its management. Complete clearance of lesions of chronic cutaneous leishmaniasis was reported in 28 patients within 2 months of starting levamisole, 150 mg twice weekly without any significant adverse effects. [12] Similar results have been reported by other researchers. [13],[14] Although these results are encouraging, further studies are needed before making any recommendations.

A double-blind, placebo-controlled, randomized trial on 26 patients of chronic dermatophytosis due to Trichophyton rubrum showed a significantly stronger immunological response with griseofulvin plus levamisole than with griseofulvin plus placebo, although the clinical cure rates in both groups were similar. [18] Levamisole was also found to hasten the remission of oral candidiasis when given as an adjuvant with nystatin in patients with impaired cell-mediated immunity. [19]

Levamisole has been found useful in inducing rapid bacterial clearance in leprosy and in the management of lepra reactions owing to its immunostimulatory properties. When given as an adjuvant with multidrug therapy, it induced significantly higher bacteriological improvement than multidrug therapy alone. [20],[21] In a placebo-controlled trial on 20 patients of subpolar lepromatous leprosy, levamisole added as an adjuvant to chemotherapy for 1 year was found to induce a statistically significantly greater bacteriological improvement than chemotherapy alone. [20] Levamisole has also been tried in mild to moderate erythema nodosum leprosum. In a dose of 150 mg daily for 3 consecutive days every 12 days, it brought down reactions faster than clofazimine. [22] However, a Cochrane review of the different treatment modalities in erythema nodosum leprosum reported no significant difference between levamisole and placebo after 3 months of therapy. [23]

A uncontrolled, open, pilot study included 28 patients of pediculosis capitis treated with oral levamisole (3.5 mg/kg/day) for 10 days. [24] On the 11 th day, meticulous hair examination revealed that 23 (85%) patients had responded to treatment with 18 (67%) having responded completely and 5 (19%), partially.

Significant clinical improvement in chronic pyodermas has been reported with levamisole and this has been attributed to its T-cell stimulatory action. There are numerous reports of clearance of resistant bacterial infections with levamisole in patients with impaired cellular immunity. [25],[26]

Owing to its immunomodulatory and antiviral activity, levamisole has been used in the management of HIV-positive patients either as monotherapy or as an adjuvant with antiretroviral treatment. Its use has been recommended before the patient′s transition to full-blown AIDS. In one study, 50 HIV-affected children who were not on antiretroviral therapy received only levamisole in a dose of 2 mg/kg/day for 3 days each week for 24-52 weeks. The number of infections (275 vs. 455), progression to AIDS (14% vs. 60%) and number of deaths (4 vs. 28) were significantly less than in the control group over a follow-up period of 18 months. [27] However, in another study, among 178 HIV-positive patients with CD4 counts <350 and not receiving antiretroviral drugs, supplementation with selenium and levamisole 50 mg/day every alternate day led to significant increases in CD4 cell counts after 6 months of therapy while CD4 counts decreased significantly in the group receiving levamisole alone. [28]

In an open-prospective study, 39 patients of erythema multiforme were treated with either levamisole 150 mg thrice weekly alone, or in combination with systemic corticosteroids for as long as there was evidence of disease. [29] Thirty-one patients showed a complete response while four responded partially to levamisole therapy. Others have also reported similar results which have been attributed to its effect on the inflammatory responses including sequestration or elimination of persistent antigen and increasing interleukin-2 production by T lymphocytes. [30],[31]

Levamisole has been used as a treatment modality for recurrent oral aphthae and Behcet′s disease. [36],[37],[38] One report describes 30 patients of Behcet′s disease who were treated with levamisole (150 mg every day in seven patients and 150 mg daily for 3 consecutive days every week in the others for an unspecified duration). [36] Five discontinued the therapy owing to adverse effects. Muco-cutaneous manifestations improved in two-thirds of the treated patients and uveitis in half. Improvement was also noted in arthritis. However, in another trial, levamisole was found ineffective in the prophylactic treatment of recurrent aphthous stomatitis. [39]

Levamisole has been found to be an effective adjuvant with oral antibiotics in acne management. In a double-blind trial, 60 patients of acne vulgaris were randomized into two groups, one receiving doxycycline 100 mg/day with levamisole 2.5 mg/kg/week (up to 150 mg/week) and the other group receiving only daily doxycycline. [40] After 6 months, significant reductions were seen in total lesion counts, the acne severity index and papule/pustule and nodule/cyst counts in the levamisole group. Another similar study compared azithromycin alone and azithromycin with levamisole in 169 patients of acne vulgaris. [41] In 2 months, statistically significant improvements were seen with levamisole with reduced numbers of papules/pustules and nodules/cysts. There have also been numerous reports of the efficacy of levamisole in acne fulminans and acne conglobata. [42],[43]

Levamisole, alone or as an adjuvant, has been found useful in controlling disease progression in vitiligo. A randomized, placebo-controlled, double-blind Indian study assessed the efficacy of levamisole in slowly spreading, limited vitiligo. [44] Sixty patients with vitiligo involving <2% of the body surface area were randomly allocated to receive oral levamisole 150 mg or placebo on 2 consecutive days in a week along with daily topical 0.1% mometasone cream. At the end of 6 months, the proportion of patients who did not develop any new lesions was higher in the levamisole group though the difference between the two groups was not statistically significant. Another Indian study found that 94% of patients with active disease had arrest of disease activity within 2-4 months with repigmentation in 64% when treated with levamisole alone, in 87% of those treated with levamisole plus topical fluocinolone acetonide, and all patients treated with levamisole and topical clobetasol. [45] Other researchers have also reported significant improvements in vitiligo, both in terms of repigmentation and cessation of disease progression with adjuvant levamisole therapy. [46],[47] In view of these studies, levamisole can be considered a safe and inexpensive adjuvant for the management of vitiligo.

Levamisole has been tried in connective tissue disorders, where it may act via restoration of delayed hypersensitivity responses and improvement of impaired T-cell function and defective macrophage activity. One report described 8 patients with systemic lupus erythematosus treated with levamisole of whom 4 showed improvements in their skin lesions as well as in the levels of C1q and C3 over a period of 12 months. [48] Another report described 20 patients of systemic lupus erythematosus treated with levamisole (150 mg/week for 3 to 24 months), [49] with 16 of them showing improvements in clinical symptoms, reduction of proteinuria, increase in creatinine clearance and diminished levels of antinuclear antibodies. A statistically significant rise in the levels of C3 and C4 was observed at 4 months and maintained at 6-12 months in this study.

There are numerous reports on the use of levamisole in other cutaneous disorders such as psoriasis, pemphigus vulgaris, bullous pemphigoid, lichen nitidus, lichenoid dermatitis, alopecia areata, sarcoidosis and malignant melanoma but there are no controlled studies or appropriately blinded randomized trials to advocate the use of levamisole in these conditions. [50],[51],[52],[53],[54],[55],[56]

Levamisole is a U.S. Food and Drug Administration pregnancy category C drug and is considered safe during lactation. The adverse effects of levamisole are generally mild and transient and rarely warrant its discontinuation. Common adverse effects include abdominal symptoms such as nausea and abdominal cramps, a flu-like syndrome and arthralgias. [56] There are however reports of agranulocytosis, multifocal leukoencephalopathy, ataxia, psychosis, myopathy, lichenoid eruptions, leg ulcers, fixed drug eruptions, necrotizing vasculitis and retiform purpura. [1],[57],[58],[59],[60],[61] Levamisole has been used as an adulterant of cocaine as it enhances the euphoric effects of the drug; this has led to a large number of cases of agranulocytosis in addicts using adulterated cocaine. [62]

Levamisole is an immunomodulator which can be used in a large number of dermatological disorders. However, it cannot replace first-line therapeutic modalities as most of the studies of its efficacy have a small sample size [Table - 2]. More evidence from blinded randomized control trials and case-control studies in various dermatoses is needed to determine its efficacy and to compare it with established treatments. Nevertheless, this low-cost drug can be used as an adjuvant to established modalities. 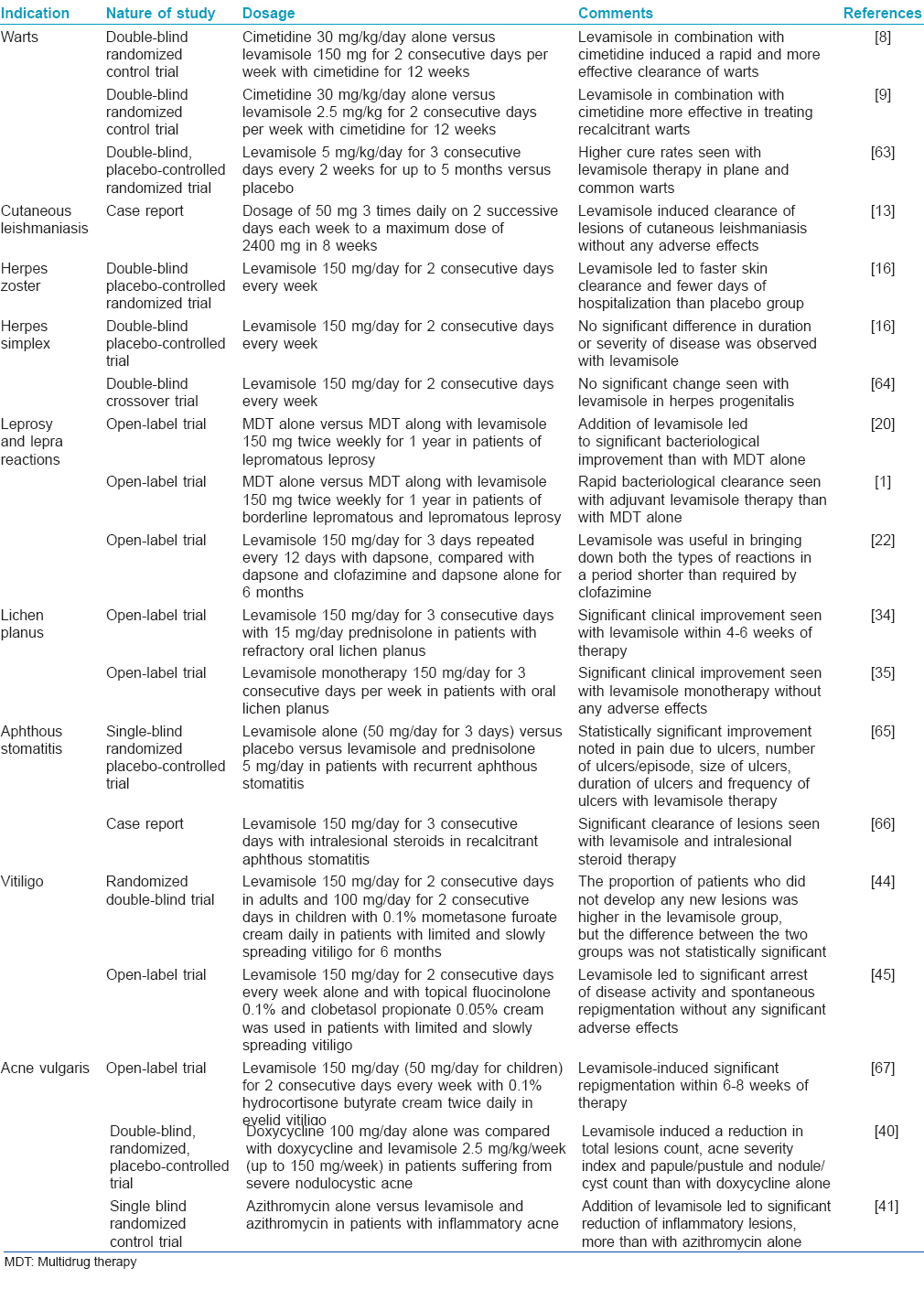 Table 2: Studies of therapeutic use of levamisole for various cutaneous disorders

There are no conflicts of interest.[67]