Linking of psoriasis with osteopenia and osteoporosis: A cross-sectional study

Psoriasis is a chronic inflammatory disease whose prevalence is estimated to be between 1 and 5% of the world population.[1] This condition has been associated with a higher prevalence of metabolic syndrome, obesity, hyperlipidemia, diabetes mellitus, hypertension and arteriosclerosis.[2],[3] These comorbidities seem to be responsible for the increased risk of major cardiovascular events in psoriatic patients.[4] Among the comorbidities associated with psoriasis, the association of this disease with vitamin D deficiency is globally recognized. The presence of lower levels of vitamin D in psoriatic patients have been related with higher levels of cholesterol, low-density lipoprotein, triglycerides and glucose.[5],[6] The reason for such a large number of pathologies associated with psoriasis appears to lie in the chronic inflammatory state present in psoriatic patients, which has been demonstrated by increased proinflammatory cytokines such as tumor necrosis factor-alpha, interleukin-12, interleukin-23 or interleukin-17 in these patients.[7],[8]

Moreover, increased levels of C-reactive protein have been found in psoriatic patients, as well as low levels of vitamin-D metabolizing enzymes, CYP27A1 and CYP27B1, within psoriatic lesions.[9],[10] On the other hand, vitamin-D supplementation and treatment with oral calcitriol have been associated with clinical improvement in psoriasis lesions.[11],[12],[13]

Osteoporosis is a skeletal disorder characterized by reduced bone mass and micro - architectural changes in bone tissue that result in an increased risk of fractures.[14] The World Health Organization defines osteoporosis as bone mineral density <2.5 standard deviation below the mean for young white adult women (T-score). Osteopenia is defined as the presence of a bone mineral density between 1.5 and 2.5 below the T-score and represents a low bone mass that is not as severe as osteoporosis. This entity is a major public health problem due to the increased risk of development of fractures associated with osteoporosis.[15] However, there is another type of osteoporosis that can occur secondary to various entities such as endocrine pathology, rheumatologic disease, increased chronic inflammation and vitamin-D deficiency.[16] In addition, the presence of a lower bone mineral density has been described in patients with long-term psoriasis in a study without a control group.[17]

Considering this background, a cross-sectional study with a control group was conducted to assess the levels of bone mineral density in patients with psoriasis in comparision to those existing in healthy controls and patients without psoriasis diagnosed with osteopenia or osteoporosis.

Patients with moderate to severe cutaneous psoriasis were systematically recruited from the outpatient department of the Psoriasis Unit of our hospital. Inclusion criteria were: a clinical diagnosis of psoriasis with a Psoriasis Area Severity Index higher than 4, age 18 years or older, residence in the metropolitan area of Granada (southern Spain) and adequate daily sun exposure, described as staying outdoors for at least 1 hour per day. Exclusion criteria were: personal history of treatment with systemic or biologic agents, or photochemotherapy, personal history of psoriatic arthritis, rheumatoid arthritis, inflammatory bowel disease or other inflammatory diseases and intake of calcium or vitamin-D supplements. Moreover, healthy controls from the same metropolitan area and patients diagnosed with osteopenia or osteoporosis who were followed in the Endocrinology Unit of our hospital were included in the study. All the osteopenia/osteoporosis patients had been recently diagnosed by densitometry and had not received any kind of treatment. Patients who met these selection criteria and signed an informed consent (in accordance with the Helsinki Declaration) were enrolled in the study; no selected patients refused to participate. The study was approved by the Ethics Committee of Hospital Universitario Virgen de las Nieves, Granada, Spain.

Data regarding age and sex were collected from all study participants. All patients underwent physical examination, and their weight and height were recorded to calculate their body mass index (kg/m2), as well as their psoriasis area and severity index. Blood samples were drawn in the early morning for laboratory analysis of biochemical parameters, including serum 25(OH) vitamin-D, calcium, phosphorus, parathyroid hormone and osteocalcin. In addition, bone mineral density was measured by bone densitometry using dual-energy X-ray absorptiometry, employing an Hologic Discovery Wi® (Hologic Inc., USA).T-score values in the Ward triangle of the Hip (tHip), the fourth vertebra in the lumbar spine (tl4) and the whole lumbar spine (tl1-4) were obtained. All laboratory parameters were collected in two consecutive months (March/April 2016).

A descriptive analysis by group, psoriasis (P), control (C) and osteopenia/osteoporosis (O), was carried out for all the variables in database. Contingency tables according to group and sex were made using generalization of exact Fisher's test in RXC tables to assess the association between them. One-way analysis of variance was performed for each numerical variable to compare means by group and stratified by sex. Correlation matrix between numerical variables was computed to measure the association between them.

To measure mean differences between P–C and P–O, multiple linear regression was computed. Given that differences between groups were affected by confounding factors (sex, body mass index, vitamin-D, parathyroid hormone and osteocalcin), a crude and an adjusted model are presented, the latter being the main analysis of the study. This type of analysis allows the elimination of existing differences between the various study groups. The outcomes considered were tHip and tl4, and covariates were group, sex, body mass index, vitamin D, parathyroid hormone and osteocalcin.

Table 1: General characteristics of the basal features of the psoriatic patients included on the study 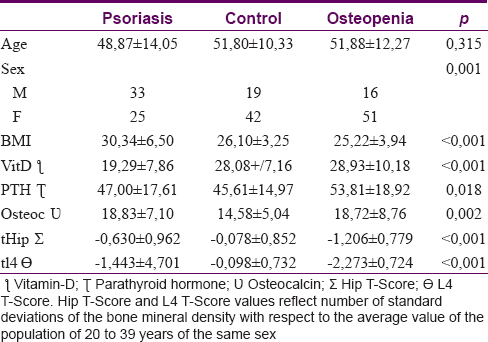 Table 2: General comparison of the basal characteristics among the three study groups

Table 3: General comparison of the basal characteristics among the three study groups stratified by Sex

The multiple linear regression for hip T-score adjusted for confounding factors, including sex, age, body mass index, vitamin-D, parathyroid hormone and osteocalcin [Table - 4], showed that the mean hip T-score in group C was higher than group P (P = 0.001), whereas the average T-score in the O group was lower than P group, not reaching statistical significance (P = 0.129). Furthermore, age showed an independent effect on the levels of hip T-score, decreasing its value with the increased age of patients (P = 0.001). Furthermore, the body mass index variable also showed a significant effect on hip T-score, increasing its value with the body mass index rising [r = 0.272; P = 0.035, [Figure - 1]. On the contrary, an inverse association between hip T-score and Psoriasis Area Severity Indexwas found, although this association was nearly significant [r= −0.230; P = 0.091, [Figure - 2]. The variables such as gender, vitamin-D, parathyroid hormone and osteocalcin did not show any significant effect on hip T-score.

Table 4: Crude and adjusted for confounding factors regression model in the comparisons of triangle of the hip levels between psoriasis and control group and psoriasis and osteopenia/osteoporosis group

The multiple linear regression for L4 T-score adjusted for confounding factors [Table - 5] revealed that the average T-score in C was higher thanP (P = 0.002), while the mean T-score in O was significantly lower than P (P < 0.001). None of the other variables showed a significant effect on L4 T-score.

Table 5: Crude and adjusted for the confounding factors regression model in the comparison of fourth vertebra in the lumbar spine levels between psoriasis and control group and psoriasis and osteopenia/osteoporosis group

In this study, bone mineral density values in patients with psoriasis were significantly lower than in healthy controls from the general population. In addition, a trend was observed in psoriasis patients, who presented with better levels of bone mineral density than patients of osteopenia/osteoporosis. Significant differences between group P and group O were only observed in the T-score of L4 after adjustment for confounding factors.

Although not related to the primary objective of the study, some of the current results deserve comment. First, in the psoriatic group the percentage of men was slightly higher than women (56.9% vs 43.1%), while in the control group and osteoporosis group the percentage of women was higher (68.9 and 76.1%, respectively). These results are consistent with the findings of a recent American review[18] and another study carried out in Spanish population.[19] On the contrary, the high percentage of women in the O group is similar to that found in other epidemiological studies in industrialized countries.[20],[21] Likewise, a higher body mass index in psoriatic patients has also been described.[22] In addition, previous studies have demonstrated that increased body mass index was positively correlated with increased risk of developing psoriasis.[23],[24]

Relationship between psoriasis and lower levels of bone mineral density

An inverse association between body mass index and serum levels of vitamin D have been demonstrated by several studies, both in patients with psoriasis[7],[25] and in healthy and obese patients.[28],[29],[30]

Limitations and need for future studies

The limitations of this study are those of cross-sectional studies with control group, such as the lack of follow up and the inability of making causality inferences. Although there is a male predominance in the P group, the use of a multivariate analysis with adjusted model eliminates the differences between the study groups mediated by this variable, making the groups fully comparable. On the contrary, despite the multiple studies describing the association between psoriasis and low bone mineral density levels, a recent Norwegian population-based study has not found a reduced bone mineral density level or an increased risk of osteoporosis in psoriatic patients.[36] Moreover, despite the deficit of vitamin D found in patients with psoriasis, treatment with oral calcium and/or vitamin D to prevent osteoporotic fractures remains controversial.[37],[38]

To Alberto Andrés, for its help with English translation.

The authors declare not to have any financial support and sponsorship