Lobulated mass on the back of the scalp

A 22-year-old man presented with a large swelling on the back of his scalp. The lesion was present since his birth and had progressed in size gradually. It was not associated with any local or systemic symptom. His medical history and family history was unremarkable.

Examination revealed a well-demarcated, firm, protuberant mass measuring about 20 cm × 12 cm in size and was studded with multiple, coalescing, skin-colored nodules. There were parallel folds and furrows giving rise to a cerebriform appearance of the occipital area of the scalp. Hairs were sparse on the lesion and multiple broken stumps of hairs were also seen [Figure - 1]. There was no skin erosion, dermatitis, infection, odor or tenderness. There was no other mucocutaneous lesion. He had normal intelligence (the full-scale intelligent quotient was 98) and he had no psychiatric problem. Examination of the neurological, ophthalmological and other systems was normal.

Routine laboratory test results, chest X-ray, and ultrasonography of the abdomen were within normal limits. Computed tomographic (CT) scan of the head showed no bony or intracranial abnormalities. Histopathological examination of multiple lesional punch biopsy specimens was carried out [Figure - 2] and [Figure - 3].

What is the Diagnosis?

The diagnosis was made on the basis of clinical features and histopathological findings.

Histopathology showed nests of nevus cells containing varying amounts of melanin in the papillary and deep reticular dermis without any junctional component and cellular atypia. Number of hair follicles was reduced in the dermis.

Cutis verticis gyrata (CVG) is an abnormality of the scalp characterized by the formation of furrows and folds resembling the surface of the brain. [1] Primary (where no underlying cause is found) and secondary types of this condition do exist [1] [Table - 1]. The primary form is further sub-classified into primary essential CVG (in which no other association is found) and primary nonessential variety. [2] The later form is often linked with mental retardation (most common association) and other neuropsychiatric manifestations, [2] including cerebral palsy, epilepsy, and schizophrenia. Ophthalmologic abnormalities, cranial abnormalities, and deafness may also occur. In the secondary form of CVG, hypertrophy of the skin is caused due to an underlying disease. [3] CIN is a rare cause of secondary CVG. [1],[3],[4] CIN presents either at birth or during early childhood as a gradually enlarging skin-colored or slightly pigmented asymmetric and usually asymptomatic lesion. Lesional alopecia is common. [1],[3],[4] Patients with CIN usually have normal intelligence. A higher incidence of the disease is reported in females. [4] Pruritus, burning sensation and pain may occur. [4] Although scalp is the most common site involved, occurrence over the back has recently been reported. [5] On histological examination, intradermal nevus cells are seen throughout the full thickness of the dermis. Neuroid transformation may be seen in the deeper parts of the lesion with increased collagen fibers. Hair follicles can either be normal or atrophic. [6] The diagnosis of CIN is based on the clinical features and histopathological findings. [1],[3] No systemic diseases have been reported to be associated with CIN, whereas primary CVG is often accompanied by neurological or endocrinological anomalies. [1] Giant congenital melanocytic nevi (GCMN) and CIN are thought to be related conditions by some authors. Others argue that CIN should be differentiated from GCMN, [1],[4],[6] as CIN is usually not pigmented, nevus cell nests occur rarely at the dermoepidermal junction and sparse hair within a lesion is common. On the other hand, GCMN are darkly pigmented and hairy and junctional activity is frequent. [1],[6] 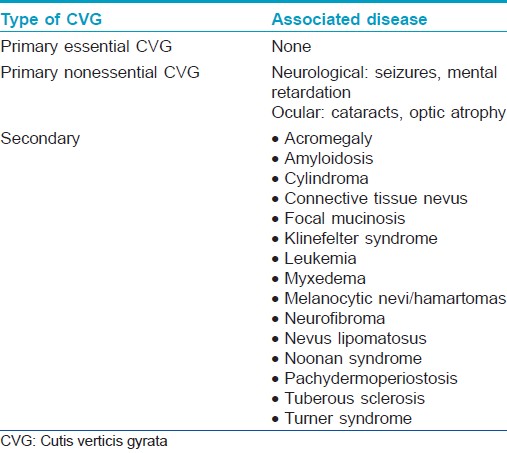 Other differential diagnoses that were considered in the present case and ruled out on histological grounds were other causes of secondary CVG, plexiform neurofibroma, nevus lipomatosus, aggregated cylindromas, connective tissue nevus, amyloid deposition and long-standing dissecting cellulitis of scalp, and multiple metastatic nodules of scalp. Sparing of the face in our patient helped to rule out pachydermoperiostosis, in which the scalp may resemble CVG.

Because of the rare possibility of malignant transformation, [4] surgical excision and plastic reconstruction of CIN is the preferred treatment option. [1],[4] However, each individual case needs a precise decision regarding whether to excise the lesion surgically or to follow a wait-and-see policy. [3]

Our colleagues from the plastic surgery department advised serial excision and plastic reconstruction of the lesion. However, the patient declined to undergo any surgical procedure. Hence, we advised him semi-annual follow-up visits to detect any possible malignant transformation at the earliest.