Background: Psoriasis vulgaris is an inflammatory skin condition characterized by dramatic biochemical and immunological changes. Aims: The aim of the study was to evaluate antimicrobial response, tissue degeneration reactions and distribution of inflammatory cytokines in untreated psoriatic skin as well as the correlations between these factors and influence on the course of the disease. Methods: We evaluated skin samples obtained from routine punch biopsies in 40 patients with psoriasis vulgaris. All tissue specimens were examined by hematoxylin and eosin staining and immunohistochemistry for human beta defensin 2 (HBD-2), matrix metalloproteinase 2 (MMP-2), tumor necrosis factor-alpha (TNF-alpha), interleukin 6 (IL-6) and IL-8. The staining intensity was semi-quantitatively graded. Results: Numerous keratinocytes, fibroblasts and macrophages expressed HBD-2 while the number of MMP-2-positive macrophages, fibroblasts and epitheliocytes varied. TNF-alpha-positive cells varied from a few to numerous in each microscopic field. IL-6-positive cells varied from a few to abundant and IL-8-positive cells from numerous to abundant in each field. Limitations: This study had a rather small patient number. Conclusions: Psoriatic skin shows a strong correlative increase in skin antimicrobial proteins and enzymes mediating tissue degeneration suggesting that the skin maintains compensatory mechanisms during persistent remodeling. While individual notable decrease in antimicrobial proteins was observed in some tissue samples, generally the increased human beta defensin associated with psoriasis is likely to be due to an altered immune status. TNF-alpha, IL-6 and IL-8 are common cytokines expressed in psoriatic skin plaques to maintain the inflammatory cycle. HBD-2, MMP-2 and TNF-alpha positively correlate with the severity of psoriasis. Meanwhile, the expression of IL-8 significantly decreases with clinically more severe psoriasis, perhaps making these factors candidate prognostic factors for psoriatic inflammation.
Keywords: Cell-mediated immunity, immunodermatology, psoriasis

Psoriasis vulgaris is an inflammatory condition of the skin with possible nail and joint involvement associated with immense biochemical and immunological changes. The pathogenesis of psoriasis is still unclear but T cells are thought to play a primary role. In addition, psoriatic skin classically presents with abnormal epidermal changes and modified keratinocytes.[1] These abnormal keratinocytes produce excess amounts of antimicrobial peptides and proteins and induce immune cells to produce inflammatory cytokines. One of the antimicrobial peptides that has been isolated from psoriatic scales is human beta defensin 2 (HBD-2), a cationic microbial peptide expressed only by induction with pro-inflammatory cytokines such as tumor necrosis factor-alpha (TNF-alpha) or interleukin 8 (IL-8). TNF-alpha is highly expressed in psoriatic lesions and induces increased HBD-2 expression in keratinocytes. HBD-2 is chemoattractive to macrophages and interacts with other inflammatory cells.[2],[3] Antimicrobial peptides play an essential role in permeability barrier homeostasis highlighting their function as a chemical shield of the skin and a physical barrier. In addition to keratinocytes, the natural microflora of the skin participate in barrier defense by expressing antimicrobial molecules. Upregulation of HBD-2 in psoriatic skin is thought to contribute to pathogenesis and the resistance to secondary infections caused by Gram-negative bacteria or candida. Thus, HBD-2 is a dynamic component of the local epidermal defense system.[4],[5]

Matrix metalloproteinase 2 (MMP-2) is a gelatinase that is a zinc-dependent endopeptidase involved in the remodeling of extracellular matrix. Gelatinases have been found to be important in wound healing, angiogenesis, morphogenesis, metastasis and tumor invasion. MMP-2 has a unique structure and in its active form, can bind to gelatin. MMP-2 and its tissue inhibitor are overexpressed in the suprabasal layers of psoriatic epidermis.[6]

Interleukin-8 is secreted by epithelial, endothelial, mesothelial and tumor cells, fibroblasts, monocytes and neutrophils as an inflammatory response. IL-8 plays a role in inflammation and wound healing; it promotes chemotaxis of all migratory immune cells, recruits T cells to the site of inflammation via neutrophil activation and has potent angiogenic, pro-inflammatory, growth-promoting and matrix degradative properties. TNF-alpha strongly induces IL-8 production that, with Type I interferons and interferon-gamma, is one of the key cytokines in psoriatic inflammation.

Tumor necrosis factor-alpha is a pro-inflammatory cytokine produced by T cells induced by myeloid dermal dendritic cells in psoriatic lesions and reciprocally TNF-alpha activates dendritic cells. TNF-alpha also has its own anti-inflammatory properties; in some patients, anti-TNF therapy can induce new onset of psoriasis. Local and systemic overexpression of pro-inflammatory cytokines IL-6, IL-8 and TNF-alpha are involved in the initiation, maintenance, course, severity and recurrence of psoriasis.[1],[7],[8] Therefore, the role of cytokines in the pathogenesis of psoriasis has resulted in their frequent use in new therapeutic approaches that directly target inflammatory events but finding an effective treatment is an ongoing challenge.

The aim of the study was to evaluate antimicrobial response, tissue degeneration reaction and distribution of inflammatory cytokines in untreated psoriatic skin as well as the correlations between these factors and influence on the course of the disease.

We selected 40 patients with psoriasis between the ages of 18 and 70 who had the disease for at least 6 weeks and presented with characteristic eruptions at typical sites. All patients had a clinically and histologically confirmed diagnosis of psoriasis vulgaris. Patients who had a severe tan, had previously received local and systemic medication or had concomitant diseases were excluded. Skin biopsies of new untreated psoriatic lesions were obtained using a routine 3 mm punch following local anesthesia with lidocaine. Ten clinically healthy skin samples obtained during nevus excision procedure were used as control material.

The study was approved by the ethical committee at Riga Stradins University, permit issued on September 10, 2009.

Skin biopsy tissue was fixed in Stefanini's solution, dehydrated and embedded in paraffin.[9] Four micrometer thick sections were prepared and stained with hematoxylin and eosin.[10]

The intensity of immunostaining was semiquantitatively graded, as follows:[12]

The psoriatic epidermis of our tissue samples was characterized by loss of the granular cell layer, parakeratosis, orthokeratosis and acanthosis as well as the formation of the characteristic Munro microabscesses. We observed increased mitotic activity in basal cells. Polymorphonuclear leukocytes and lymphocytes infiltrated dermis and epidermis. The arterioles within the papillary dermis were slightly dilated and showed sclerotic changes. 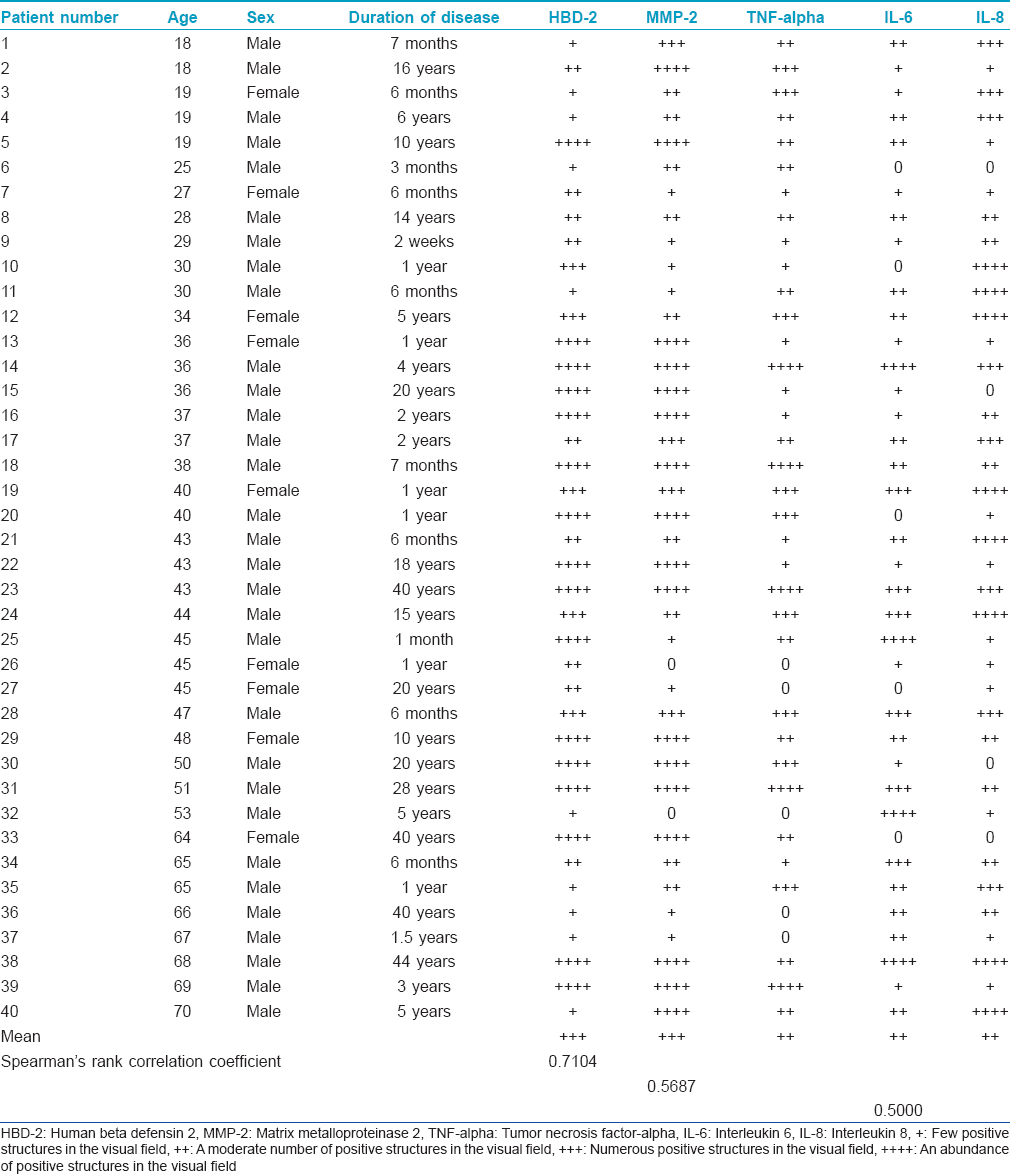 The number of MMP-2 positive macrophages, fibroblasts and keratinocytes varied from a few (+) to abundant (++++), mainly in the dermis of psoriatic skin [Figure - 2].

We found TNF-alpha-positive lymphocytes and macrophages in almost all skin samples, particularly in the papillary dermis, walls of blood vessels and eccrine sweat glands. The number of TNF-alpha-positive cells varied from a few (+) to numerous (+++) in each visual field [Figure - 3].

We found statistically significant correlations between the following factors and disease severity:

No statistically significant correlations were found with gender or age of the psoriasis patient.

Various types of human cells, including epithelial cells, express antimicrobial peptides. The peptides act on a broad spectrum of bacteria, fungi and viruses. They can disrupt or penetrate the bacterial membrane and interfere with intracellular functions. Human beta defensins link cell surface receptors to facilitate chemotaxis and in particular, HBD-2 can recruit immature dendritic cells and T cells to sites of interest. HBD-2 was previously shown to be produced by human epithelial cells in psoriatic skin.[14],[15] It is expressed at low levels in healthy keratinocytes and is often upregulated during inflammation or infection, suggesting that the HBD-2 increase is a secondary response if the primary defense against inflammation is not sufficient.[16] Previous studies have found a substantial relationship between an increase in human beta defensin genomic copy number and the risk of psoriasis onset.[17],[18] In our study, we evaluated HBD-2 expression in untreated psoriatic lesions and found that it was expressed in all samples. Furthermore, it was most highly expressed in inflammatory areas, consistent with the model of participation of the innate immune system in psoriasis. Some biopsies showed a significant decrease in HBD-2 expression. This finding may be related to the severity or length of the disease as fewer HBD-2 positive cells were found more commonly in patients with a history of psoriasis for only a few months. Patients with a longer course of psoriasis and more pronounced inflammation (both clinically and histologically) in their skin biopsy samples presented more obvious HBD-2 expression. Various studies have looked at serum levels of antimicrobial peptides as a possible marker of psoriasis severity or disease activity. Recent data suggest that HBD-2 serum levels in untreated patients may not relate to the severity of psoriasis but, their levels significantly increase after fumaric acid ester therapy. Additionally, treatment with the adipokine, visfatin can increase HBD-2 suggesting that psoriasis is related to metabolic syndromes.[19],[20] A decrease in HBD-2 serum levels has been detected after topical calcipotriol and betamethasone dipropionate combination therapy.[21] These data suggest that HBD-2 levels could be used as a possible marker for therapeutic efficacy.

Matrix metalloproteinases in serum and synovial fluid have become valuable biomarkers for the evaluation of psoriatic arthritis and its treatment with TNF inhibitors, which are also used in psoriasis.[22],[23] There are also available data that suggest that MMPs are important biomarkers of psoriasis activity and therapeutic response.[24],[25],[26],[27] Previous studies have found that ultraviolet radiation and vitamin D levels contribute to the severity, course and treatment success of psoriasis. It has been shown that serum vitamin D levels positively correlated with HBD-2 expression levels. In addition, a positive correlation exists between ultraviolet radiation and the expression of gelatinase MMP-2.[28],[29] We found a clear upregulation of MMP-2 expression in our samples; these data support the possibility that it could be utilized as a marker for psoriasis activity or a therapeutic target.[30] We found a strong positive correlation between MMP-2 and HBD-2 and both of them could be used as diagnostic/prognostic markers for psoriasis. In some of the psoriasis patients observed in this study, HBD-2 expression was low even though we could still find numerous MMP-2-positive cells. One potential explanation is that recent ultraviolet irradiation resulted in MMP upregulation. While antimicrobial peptide levels would be altered in such a situation, we excluded recently tanned patients from our study. Furthermore, we did not measure vitamin D levels in our patients and vitamin D could also be a possible key factor in HBD-2 and MMP-2 expression. We were unable to find any previous reports that simultaneously compared HBD-2 and MMP-2 in untreated psoriatic skin. Interestingly, the excessive expression of MMP-2 and almost absent HBD-2 expression has been found in biopsies of hidradenitis suppurativa, possibly due to MMP-2 providing a proteolytic environment and inactivating HBD-2.[31] MMP-2 also positively correlates with TNF-alpha, supporting the model that MMP-2 plays an important role in the pathogenesis of psoriasis.

The pro-inflammatory cytokines TNF-alpha, IL-6 and IL-8 are highly expressed in psoriasis and form a complex that induces the inflammatory signaling cascade resulting in the classic psoriatic plaque. Innate immune cells produce the key cytokines TNF-alpha and IL-6 which in turn activate myeloid dendritic cells which present antigens to produce new inflammatory mediators. Thus, T cells differentiate, keratinocytes are activated and antimicrobial peptide (HBD-2) and pro-inflammatory cytokines (TNF-alpha and IL6) are produced. IL-8 is a known cytokine with pro-inflammatory and growth-promoting activities and also induces keratinocyte proliferation.[1],[32],[33] HBD-2 can also induce cytokine production, such as TNF-alpha and IL-6.[34],[35] We detected variable, predominantly moderate expression of TNF-alpha, IL-6 and IL-8 in our skin samples with more prominent upregulation in the skin from patients with a long history of the disease. IL-6 and IL-8 showed a relevant positive correlation which is consistent with the current understanding of psoriasis pathogenesis. It appears that persistent skin inflammation is characterized by pro-inflammatory cytokine expression. Thus, these factors may become promising prognostic tools of the disease course.

Our data confirm that inflammatory cytokines are primary players in the pathogenesis of psoriasis but the antimicrobial peptide HBD-2 and gelatinase MMP-2 are also important factors and could be further considered in therapeutic approaches to psoriasis.

As a limitation, it should be noted that the study had a rather small patient number.

Antimicrobial peptide HBD-2, tissue degeneration marker MMP-2 and TNF-alpha positively correlate with the severity of psoriasis. On the other hand, the expression of IL-8 significantly decreases with clinically more severe psoriasis. Perhaps, HBD-2, MMP-2, TNF-alpha and IL-8 therefore can be considered as prognostic factors for psoriatic inflammation.