Low-dose methotrexate combined with superficial X-ray in the treatment of folliculotropic mycosis fungoides: A case report

According to the World Health Organization-European Organization for Research and Treatment of Cancer (WHO-EORTC), folliculotropic mycosis fungoides (FMF) is categorized as a variant of mycosis fungoides (MF) because of its distinctive clinicopathologic features.[1] Skin findings include grouped follicular or acneiform papules, such as clustered comedones, nodulocystic lesions, pustules, milia, as well as indurated plaques or tumors. Representative skin lesions typically involve the head and neck, especially the eyebrow, showing plaques and alopecia with severe pruritus.[2] Histopathologically, the follicular epithelium is infiltrated with atypical lymphocytes, with relative epidermal sparing.[3] This variant is associated with a worse prognosis than classical mycosis fungoides because of its resistance to conventional therapies.[4]

Initially, the patient was treated with interferon α-2b, isotretinoin, nitrogen mustard, and psoralen-UVA for 1 month, resulting in minimal improvement. Subsequently, methotrexate was added for 1 month, which resulted in an excellent response [Table - 1]. The initial dose of methotrexate was 10 mg per week and the maximal dose was 15 mg per week. Most lesions on the trunk and extremities disappeared after these treatments. However, some persistent plaques remained on the head and neck. The patient was then treated with a combination of methotrexate 10 mg weekly plus superficial X-ray (100 kV, 400 cGy~500 cGy, a total dose of 40 Gy for 9 cycles) per week for 3 months [Table - 2], which resulted in dramatic remission [Figure - 7]. The patient continues to be in clinical remission after 10 months. 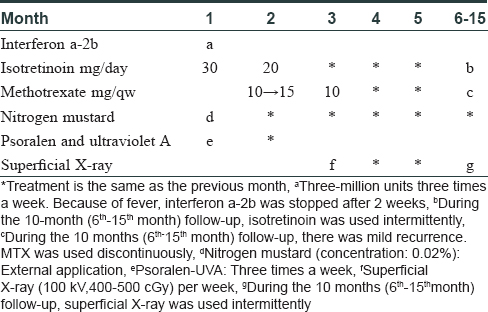 Folliculotropic mycosis fungoides, a distinct variant of mycosis fungoides, is characterized by the presence of folliculotropic infiltrates, that often spare the epidermis and preferentially involve the head and neck area.[1] It is associated with a worse prognosis than classical mycosis fungoides, due to resistance to conventional therapies such as isotretinoin, methotrexate, PUVA, and interferon.[4] In our patient, most lesions responded well to conventional therapies, except for persistent lesions on the head and neck area. Agar et al.[5] reported that a patient with localized thick plaques on the head, was treated successfully with superficial radiotherapy. Demirkesen et al.[4] reported that patients with folliculotropic mycosis fungoides, who received more aggressive and combined treatments such as PUVA, methotrexate, interferon, and radiotherapy, achieved a higher survival rate. Kelly et al.[6] reported that patients in stages I–III, who were treated with topical carmustine as monotherapy, with or without an added systemic agent demonstrated a high degree of response. In addition, a 16-year-old patient who presented with a single, firm, well-circumscribed erythematous infiltrated plaque over the forehead was successfully treated with local electron beam therapy.[7] Since the persistent lesions were localized in our patient, we chose X-ray as an additional treatment. She showed dramatic remission-a fact which may help direct future treatment guidelines of this condition. We were unable to find previous reports of the combination treatment of methotrexate with superficial X-ray in our literature search.

This regimen – methotrexate with superficial X-ray therapy – may be a new viable therapeutic option for recalcitrant mycosis fungoides, especially the folliculotropic variant.

The authors would like to thank the pathology department of Guang Dong Provincial Dermatology Hospital for their contribution to the histopathology images and thank Tiange Zhang for his help of revision.

The authors certify that they have obtained all appropriate patient consent forms. In the form, the patient has given her consent for her images and other clinical information to be reported in the journal. The patient understands that name and initial will not be published and due efforts will be made to conceal identity, but anonymity cannot be guaranteed.