A cross-sectional case–control study was conducted in dermatology clinic of Songklanagarind Hospital, Prince of Songkla University in Southern Thailand, during 2012–through 2014. The study enrolled 114 participants, 57 patients with androgenetic alopecia (case group) and 57 age- and gender-matched without alopecia (control group). The inclusion criteria were patients with age over 18 with a history and clinical examination of androgenetic alopecia which was diagnosed by dermatologists and who had no treatment within a 3-month period before enrollment. Participants with diseases or conditions that could affect the plasma zinc levels, including nutritional deficiency, diabetes mellitus, essential hypertension, renal or liver diseases, chronic diarrhea and anemia and who were currently using nutritional supplements were excluded from the study. Data was obtained on baseline characteristics of the participants, duration and family history. A clinical pattern was determined using the Hamilton–Norwood classification in men and the Ludwig-Olsen pattern in women. Participants were subjected to a nonfasting venous blood test in the morning. The plasma zinc, albumin, blood sugar levels and white blood cell count were determined. Plasma zinc levels were measured using the Varian SpectrAA-220 atomic absorption spectrophotometry (Varian, Victoria, Australia). Albumin and blood sugar levels were measured using the Modular P800 Analyzer (Roche Diagnostics, Mannheim, Germany). White blood cell counts were measured using the Sysmex XN-3000™ (Sysmex Corporation, Kobe, Japan). Reference range for plasma zinc levels is 70–150 μg/dL and the lower cut offs for morning nonfasting plasma zinc are 66 μg/dL in females and 70 μg/dL in males.[3]

The baseline characteristics of patients with androgenetic alopecia are shown in [Table - 1]. The median age was 35 years; 30 (52.6%) participants were women and 27 (47.4%) were men. The median duration of disease was 2 years. 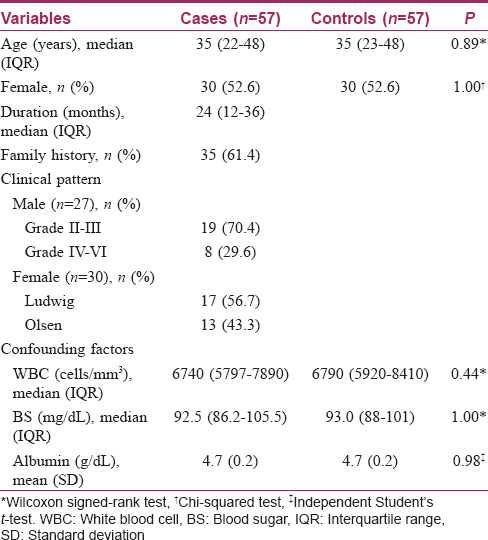 Univariate and multivariate linear regression analyses among patients with androgenetic alopecia are shown in [Table - 2]. Females with the Ludwig pattern had mean plasma zinc levels statistically significantly lower than those with the Olsen pattern.

Table 2: Result of the univariate and multivariate linear analyses among patients with androgenetic alopecia

Recent study by Kil et al. found that Koreans with androgenetic alopecia had a significant difference in serum zinc levels lower than those in the controls.[1] By contrast, Ozturk et al. did not detect a significant difference in serum zinc levels between two groups of Turkish people; however, lower zinc levels were found in the hair of the case group with statistical significance.[2] The authors hypothesized that zinc might be an essential factor in pathogenesis and may affect the treatment of androgenetic alopecia. A mouse model study showed zinc could promote regrowth of hair follicles and prevent hair loss caused by chemotherapy.[4] Nevertheless, the real effect of zinc on hair follicles is still unknown.

The study was limited because of the small sample size and a lack of analysis of patient's socioeconomic status and metabolic syndrome.

In conclusion, the authors found that the plasma zinc level in the participants with androgenetic alopecia was significantly lower than that found in the healthy participants. Females with the Ludwig clinical pattern had lower plasma zinc levels. A larger study should be conducted to determine whether zinc supplementation would be of benefit to androgenetic alopecia patients.

A research fund of the Faculty of Medicine, Prince of Songkla University.