Background: Psoriasis is a multifactorial disease. Genetic and environmental factors, which determine the disease epidemiology and clinical spectrum, are heterogeneous in different populations. A few case-control studies from other countries have shown an association between psoriasis and migratory glossitis (MG). The characteristics of the association (e.g. relationship with gender, severity of psoriasis, early- versus late-onset psoriasis, etc.) have not been clearly defined. Aim: To investigate the association of psoriasis and MG by conducting a matched case-control study in India. Methods: The study was conducted on 600 patients with psoriasis and 800 age- and sex-matched controls. Patients were examined for oral lesions and psoriasis severity was assessed by overall severity index (OSI) and psoriasis area and severity index (PASI). We compared the proportions of patients and controls with oral lesions, proportions of male and female patients who had MG, psoriasis severity scores of patients with or without MG, and proportions of early- and late-onset psoriasis patients who had MG. Results: Significantly, more patients had oral lesions than controls (P=0.0013). There was a strong association between psoriasis and MG (P<0.0001). MG and fissured tongue (FT) occurring in the same patient were also strongly associated with psoriasis (P=0.0003). There was a weak association of psoriasis with FT (P=0.0456). Significantly, higher proportion of male patients had MG compared to female patients (P=0.0246). Patients with MG had more severe psoriasis compared to those without the tongue lesions (P<0.0001). Similar proportions of patients with type 1 and type 2 psoriasis had MG (P=0.7268). Conclusions: The results suggest that MG is a rare manifestation of psoriasis which occurs more commonly in male patients and in those with severe disease, and that it occurs with equal frequency in early- and late-onset psoriasis. It will be interesting to follow those patients who have MG, but not psoriasis, to see whether they develop psoriasis phenotype in future.
Keywords: Case-control study, geographical tongue, India, migratory glossitis, psoriasis

Psoriasis is a multifactorial disease; complex genetics and environmental factors interact to produce immunological aberrations which result in the psoriasis phenotype. Genetic susceptibility and environmental factors are not same everywhere, but are heterogeneous, being different in different geographical regions. Examples include heterogeneity in the genetic susceptibility for psoriasis in different populations [1],[2],[3],[4],[5] and even from geographically distant places in a large country like India. [6],[7] Even within the apparently more homogeneous subgroup of psoriasis vulgaris (chronic plaque psoriasis), heterogeneity related to human leukocyte antigen (HLA) has been demonstrated between disease of early-onset (before 40 years of age) and late-onset disease, [8] and further subdivisions [9] seem probable. [10]

Although there are numerous interventional studies, there is a general lack of observational studies to understand the epidemiology and clinical spectrum of psoriasis in different populations. Whenever such studies have been conducted, focus has been on finding the prevalence, which has been found to vary greatly. [11]

This study was conducted on 600 patients with psoriasis and 800 controls between August 2009 and May 2012. Patients were selected consecutively from those attending the dermatology and venereology outpatient clinic of a tertiary hospital located in central part of India. The study was approved by the local Ethics Committee. Patients with all types of psoriasis were included; the only exclusion criterion was the use of any systemic antipsoriatic treatment in the past 1 month. Age- and sex-matched controls were selected from the healthy attendants accompanying other patients who did not have psoriasis. Thus, both the patients and the controls represented the same population.

All the patients included had typical clinical features of psoriasis, but in two cases that had lesions in linear distribution, skin biopsy and histopathological examination were done to confirm the diagnosis.

Psoriasis area and severity index (PASI) was calculated when appropriate. PASI was not calculated in patients who had lesions only in nails, scalp, palms and soles, or those who had only a few lesions of psoriasis. In addition, overall severity of psoriasis was assessed on a 0-10 scale (overall severity index [OSI]). Patients who had onset of disease before 40 years of age were considered to have type 1 (early-onset) psoriasis and those with later-onset type 2 (late-onset) psoriasis.

Oral examination was performed on both cases and controls and any abnormalities detected were recorded. MG was diagnosed on the basis of areas of erythema and loss of filiform papillae in geographical pattern and history of its migratory nature. Some of the patients had not noticed the lesions on tongue; in such cases, clinical photograph was taken and they were re-examined after 1-3 months. If the re-examination showed change in pattern of the lesions on tongue, only then these patients were recorded as having MG. Fissured tongue (FT) was diagnosed as anteroposteriorly oriented fissure, with or without branched fissures extending laterally.

We compared the two groups for age and gender, the proportion of patients and controls with oral lesions, proportion of male and female patients who had MG, psoriasis severity scores of patients with or without MG, and proportions of early- and late-onset psoriasis patients who had MG. The data was analyzed using an online statistical calculator (http://www.graphpad.com.) Unpaired t-test and Chi-square test were used as appropriate. The two-tailed P value of <0.05 was considered significant. Confidence intervals (CI) and odds ratios (OR) were calculated using online calculators (http://vassarstats.net and http://www.medcalc.org, respectively).

Significantly, more number of patients had oral lesions compared to controls [Table - 1]. There was a strongly significant association between psoriasis and MG [Figure - 1] and [Figure - 2]. Association between psoriasis and FT was weakly significant. When the patients and controls who had MG were excluded from analysis, the proportion of patients having oral lesions was still significantly higher compared to controls. Age (Mean±SD) of patients with MG (n=34) was 31.77±18.97 years and of controls with MG (n=7) was 42.43±15.43 years.

Table 2: Comparison of proportions of male and female patients who had migratory glossitis

Severity of psoriasis as assessed by both OSI and PASI was significantly more in patients who had MG compared to those who did not [Table - 3]. 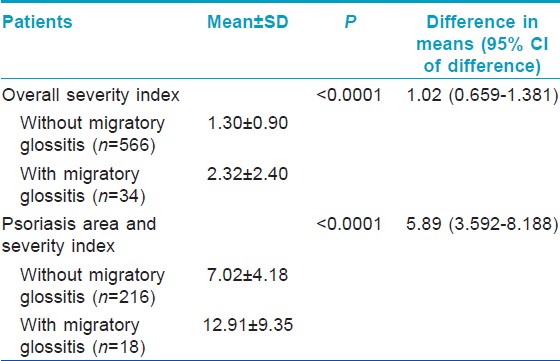 Table 3: Severity of psoriasis in patients with or without migratory glossitis

Oral mucosa appears to be rarely involved in psoriasis, occasionally lip lesions or white oral lesions, especially in the buccal mucosa, or lesions clinically indistinguishable from geographical tongue (sometimes termed "annulus migrans" or "erythema circinatum"), particularly in generalized pustular psoriasis, have been reported. [18] MG is a benign inflammatory condition of the tongue of unknown etiology, which presents as map-like areas of erythema which are not constant in size, shape, or location. [18]

The aim of this study was to investigate the association of psoriasis with MG in India and to study the characteristics of this association in relation to the features of psoriasis like gender of the patient, severity, and early- versus late-onset of psoriasis. A further goal was to verify whether any other type of oral lesions are more frequently seen in patients with psoriasis versus controls. This study was conducted on 600 consecutively selected patients and age- and sex-matched controls (n=800). Patients with all types of psoriasis were included; the only exclusion criterion was the use of any systemic antipsoriatic treatment in past 1 month, which could have affected the appearance of MG. MG was diagnosed on the basis of presence of areas of erythema and loss of filiform papillae in geographical pattern and the history of its migratory nature. FT was diagnosed as anteroposteriorly oriented fissure, with or without branched fissures extending laterally. Other findings in oral mucosa were also recorded.

There are a limited number of studies focusing on oral lesions in psoriasis. Cross-sectional studies have given conflicting results with a few studies suggesting that geographic tongue is not an oral manifestation of psoriasis, [12] while others [19],[20],[21] suggesting that MG may be a manifestation of psoriasis. A few controlled studies have addressed this problem [Table - 4], which have tended to show that MG and FT are more frequently seen in patients with psoriasis compared to controls. Histopathological findings support the hypothesis that MG may be considered an expression of oral psoriasis. [22] Both in psoriasis and in benign MG, highly significant association with human leukocyte antigen (HLA)-Cw6 and weakly significant association with B13 have been shown. [23] 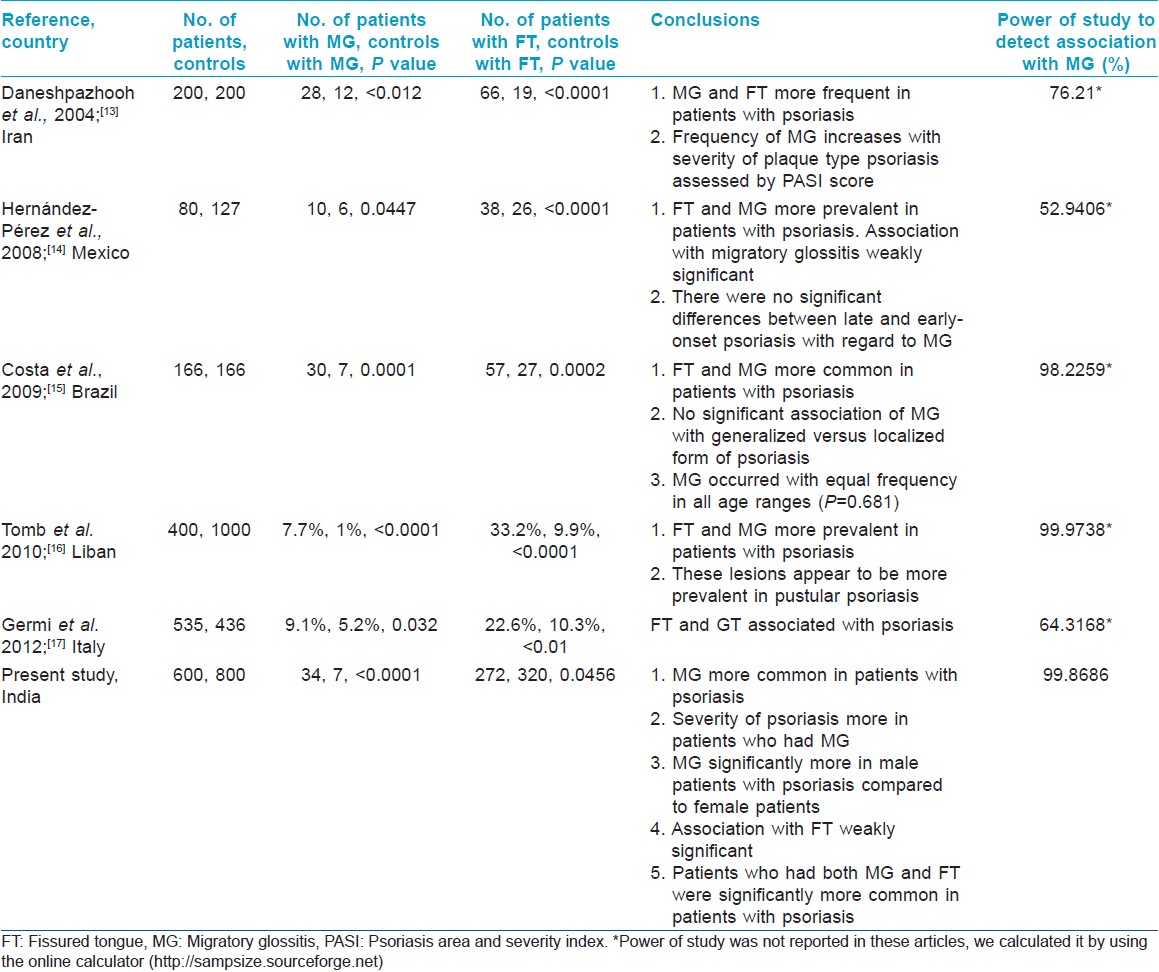 Table 4: Case-control studies on association of psoriasis and migratory glossitis

There is a general lack of observational studies on psoriasis to understand its epidemiology, clinical spectrum, and variations in its presentation in different geographical regions. As phenotype of psoriasis may vary depending on various heterogeneous genetic and environmental influences in different parts of the world, further studies in this area are likely to give important information.