Metronidazole as a monotherapy in the management of granulomatous cheilitis

Granulomatous cheilitis, also known as orofacial granulomatosis, comprises a group of diseases characterized by noncaseating granulomatous inflammation affecting the soft tissues of the oral and maxillofacial region.[1] It is characterized by a chronic and relapsing course. Intraoral sites such as tongue, gingiva and buccal mucosa can also be affected rarely.[2] Various treatment modalities have been tried with variable success rates. Combination therapy with intralesional triamcinolone and clofazimine or dapsone is one of the most commonly used treatment options.[3] Other reported treatments include prednisone, hydroxychloroquine, sulfasalazine, antihistamines, tetracyclines, metronidazole, macrolides, thalidomide and infliximab; all of these have limitations of their own.

We report two cases of granulomatous cheilitis managed with metronidazole as a monotherapy. Metronidazole is cheap and easily available and associated with minimal side effects, even if taken for a longer duration.

Two females, aged 30 years and 10 years, presented with complaints of swelling of lips for 1 year and 6 months, respectively. In the first case, the swelling involved both the lips and was associated with diffuse facial swelling. In the second case, swelling was localized to the upper lip and gums.

Both the patients did not give history of precipitating factors such as seasonal variation, premenstrual flare, drug ingestion or change of residence prior to appearance of lesions. There was no history of any systemic symptoms suggestive of allergic contact dermatitis, angioedema or diffuse facial edema due to renal involvement in the first case.

Cutaneous examination in the first case revealed macrocheilia of both upper and lower lips with diffuse facial edema [Figure - 1] and [Figure - 2], whereas examination of the second case revealed macrocheilia of the upper lip with gingival hyperplasia [Figure - 3] and [Figure - 4]. On palpation in both the cases, lips were rubbery in consistency and nontender. Features such as facial palsy and scrotal tongue seen in Melkersson–Rosenthal syndrome were absent in both patients. The rest of the oral cavity examination was normal. There was no evidence of lymphadenopathy.

With a provisional diagnosis of granulomatous cheilitis, we investigated the patients. Both the patients' hemogram, blood sugar levels, biochemistry profile and X-ray chest were normal. Angiotensin converting enzyme levels were 26 U/L (Normal, 8–52 U/L) in the first case and 34 U/L (Normal, 8–52 U/L)] in the second case. Biopsy of the first patient revealed irregular hyperplastic epidermis, dermal edema and diffuse granulomatous inflammatory infiltrate in the upper and mid dermis [Figure - 5] and [Figure - 6]. The inflammatory infiltrate consisted of lymphocytes, epithelioid cells and multiple Langhans and foreign body type giant cells, suggesting the diagnosis of granulomatous cheilitis. Biopsy of the second patient revealed hyperplastic epidermis with multiple well-defined edematous granulomata in the upper and mid dermis consisting of lymphocytes, epithelioid cells and giant cells [Figure - 7] and [Figure - 8]. Patch test was not done in either of the patients.

Granulomatous cheilitis, described by Meischer in 1945, is defined as a painless chronic recurrent swelling of the lips secondary to lymphatic obstruction by granulomatous proliferation. It is the most common monosymptomatic form of Melkersson–Rosenthal syndrome. Melkersson–Rosenthal syndrome is a rare disease characterized by the classical triad of edema of the lips and/or face, fissured tongue (lingua plicata) and relapsing peripheral facial nerve paralysis.[4]

The etiology of granulomatous cheilitis is poorly understood. Monoclonal lymphocytic expression secondary to chronic antigenic stimulation, cytokine production leading to granuloma formation and a cell-mediated hypersensitivity reaction have been suggested. Various factors such as genetic, allergic, infectious odontogenic foci, autoimmune mechanism and association of systemic diseases, such as Crohn's disease, sarcoidosis and Wegener's granulomatosis, have been implicated. Various substances such as chocolates, food additives, cinnamon compounds, benzoates, gold, mercury and nickel have been linked to the pathogenesis of the disease.[5]

Disease onset usually occurs in early adulthood with no sexual predilection. It is characterized by persistent, recurrent, diffuse, nontender, nonpitting, soft-to-firm swelling of one or both lips that eventually becomes permanent, leading to possible facial distortion. The typical course of granulomatous cheilitis is relapsing and remitting. Involvement of the upper lip is the most common, followed by the lower lip, cheeks, chin, periorbital region and eyelids. Involvement of the oral mucosa includes gingival hypertrophy, erythema, pain and erosions. The tongue may develop fissures, edema, paresthesia, erosions or taste alterations. Cobblestone appearance may be seen in the buccal mucosa, while papules, erosions and ulcers are seen on the palate.[6]

Histologically, the diagnosis lies in the demonstration of granuloma formation, consisting of collections of epithelioid histiocytes and Langhans giant cells. Differential diagnoses of granulomatous cheilitis are summarized in [Table - 1].[7] 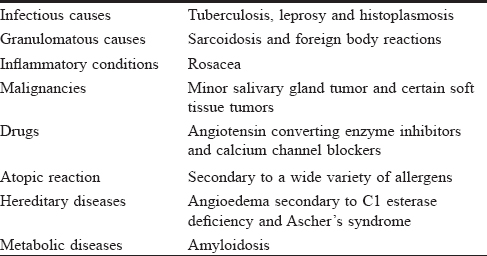 Metronidazole is a nitroimidazole drug used as an antiprotozoal and antibacterial agent. Apart from its antimicrobial action, metronidazole has been found to have anti-inflammatory, immunosuppressive and anti-itching effects.[9] It induces a significant decrease in delayed-type hypersensitivity reaction, phagocytic activity (assessed by phagocytic capacity and phagocytic index) as well as tumor necrosis factor-alpha secretion by peritoneal macrophages. It has been used in chronic inflammatory conditions such as acne and rosacea. It has also been used in lichen planus with variable success, and has been suggested as an alternative therapy for cutaneous and oral lichen planus. Its effect in granulomatous cheilitis could be secondary to its anti-inflammatory effects.

Metronidazole has been found effective in granulomatous cheilitis in combination with oral steroids. This article highlights its effectiveness as a monotherapy which has not been mentioned before.[8] Considering the chronic nature of the disease, side effects of oral steroids and reluctance to taking intralesional steroids over lips and perioral area (as seen in our patients), monotherapy with metronidazole appears to be a good option.