Background: The localized form of granuloma annulare is usually self-limiting, resolving within 2 years. Generalized granuloma annulare, on the other hand, runs a protracted course, with spontaneous resolution being rare. It is also characterized by a later age of onset, an increased incidence of diabetes mellitus, poor response to therapy, and an increased prevalence of HLA Bw35. Objective: To assess the efficacy of monthly pulsed rifampicin, ofloxacin, and minocycline (ROM) therapy in the management of granuloma annulare. Methods : Six biopsy proven patients of granuloma annulare were included in the study, five of the generalized variety, and one localized. Three of these patients were resistant to standard modalities of treatment. All six patients were treated with pulses of once monthly ROM till complete resolution of all lesions. Results were analyzed in terms of complete resolution of lesions and side effects. Presence of comorbid conditions was noted. Result: All six patients were successfully treated with 4-8 pulses of monthly ROM. None of the patients reported any adverse effects. Limitations: Small sample size and the lack of a control group are limitations. Conclusion: Treatment with pulses of once monthly ROM caused complete resolution of lesions in both localized and generalized granuloma annulare, even in cases recalcitrant to conventional therapy. There were no side effects in any of the patients. Larger trials are needed to substantiate the efficacy of monthly ROM in granuloma annulare.
Keywords: Granuloma annulare, monthly rifampicin, ofloxacin, and minocycline, Co-morbid conditions

A prospective study was carried out in the department of dermatology at Base Hospital, Delhi Cantt, India in which patients presenting with granuloma annulare (both generalized and localized form) from October 2011 to March 2013 were recruited. The study included both fresh cases as well as those not responding adequately to conventional modalities of treatment. Presence of comorbid conditions was noted. The diagnosis of granuloma annulare was confirmed histopathologically in all the patients, who were then treated with once monthly single dose of rifampicin 600 mg, ofloxacin 400 mg, and minocycline hydrochloride 100 mg till complete resolution of all lesions. Results were analyzed in terms of complete resolution of lesions and side effects. Patients were followed up for at least 6 months. Approval from ethical committee of our hospital was taken for the study.

Between October 2011 and March 2013, a total of six patients with granuloma annulare were seen in the outpatient department, five with generalized and one with the localized form, all of whom were recruited to the study. The details of all the patients are mentioned in [Table - 1]. 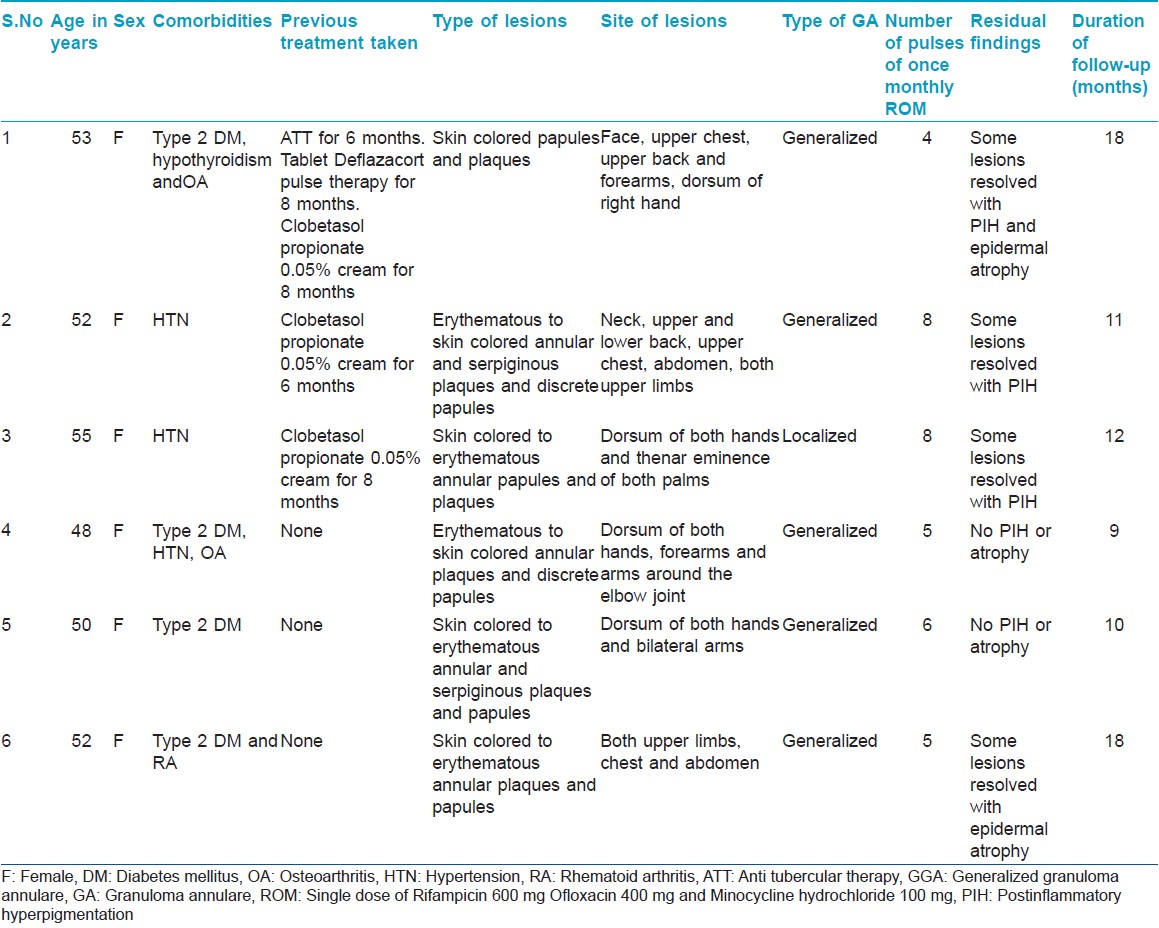 The diagnosis of granuloma annulare was confirmed histopathologically in all the patients. Special stains for mucin and acid fast bacilli were not done. Work-up did not reveal any evidence of malignancies or infection. All the patients responded well to ROM therapy with resolution of their lesions. Patients tolerated the treatment well with no side effects.

We had earlier [4] reported on the efficacy of ROM therapy in a single case of generalized granuloma annulare, with Type II diabetes mellitus and rheumatoid arthritis, who responded to five pulses of monthly ROM. [4] An extensive literature search threw up only one other study of monthly ROM used for this condition .[5] Marcus et al. reported six patients with granuloma annulare refractory to different kinds of treatment with hydrocortisone 1%, pimecrolimus, desoximetasone, mometasone furoate, clarithromycin, tacrolimus, fluticasone propionate, intralesional triamcinolone acetonide 40 mg/mL, liquid nitrogen, excimer laser, and topical triamcinolone 0.1%. The patients were treated with monthly ROM for 3 months. Three to five months after the initiation of treatment, the plaques cleared completely.

The rationale for using monthly ROM therapy for treating granuloma annulare is based on the clinical and histopathological similarities between this problem and paucibacillary leprosy, as well as their response to dapsone and prolonged antibiotic use. [6],[7],[8] Other antimicrobial agents have also been used for the treatment of granuloma annulare, postulating an infectious aetiology. [3]

Our first patient [Figure - 1], a known case of type 2 diabetes mellitus, hypothyroidism, and osteoarthritis on regular treatment, presented with generalized granuloma annulare, which was confirmed histopathologically. Owing to the lack of response with prolonged oral steroid pulse therapy along with topical superpotent steroids, and the generalized nature of the lesions, she was treated with monthly ROM therapy for 4 months, to which she responded well, with complete clearance of lesions and without experiencing any side effects. Of special interest was her lack of response to antitubercular therapy, which entailed daily ingestion of rifampicin, in contrast to complete clearance of lesions with ROM pulses for 4 months. A possible explanation for this could be that only the combination (ROM) is efficacious, and not rifampicin alone.

In this study, all the patients had complete clearance of lesions with a maximum of eight pulses of monthly ROM with no recurrence in the follow-up period. None of the drugs that the patients were taking for diabetes mellitus, hypertension, hypothyroidism, rheumatoid arthritis, or osteoarthritis was known to cause granuloma annulare.

Though granuloma annulare is known to resolve spontaneously, the generalized form usually runs a protracted course, with only rare spontaneous resolution. However, the consistency of response in all the six patients in this study, and a lack of recurrence during the follow-up period of 9-18 months seems to indicates a role of monthly ROM in the treatment of granuloma annulare.

The association of granuloma annulare with several comorbid conditions like Type 1 [9] and Type 2 diabetes mellitus, thyroid disease, malignancy, and dyslipidemias [10] has been observed. In our study also, all our patients had associated co-morbidities with three having more than one.

ROM pulses appears to be a highly effective, simple, non-invasive, less costly, and safe alternative in treating both forms of granuloma annulare. The association of multiple co-morbid conditions in all our patients reaffirms the need for a thorough screening for their detection. In view of the small sample size, ROM pulse therapy requires validation with studies involving larger numbers of patients.