Morphometric study of microvessels, epidermal characteristics and inflammation in psoriasis vulgaris with their correlations

Psoriasis is a chronic inflammatory autoimmune disease identified by the clinicalappearance of characteristic red, raised, scaly skin lesions. It is commonly accepted that the major pathological lesions observed in psoriasis are epidermal hyperproliferation with abnormal differentiation, angiogenesis and an inflammatory infiltrate in the dermis. [1] In the past, therapies for psoriasis had focused on treating epidermal hyperplasia, which was hypothesized to occur as a result of the abnormal proliferation and differentiation of basal keratinocytes. [2] It later became evident that there was a direct role for T-cells in the pathogenesis of psoriasis. [3] Another facet to this interesting disease is the vascular proliferation which occurs in the upper dermis. Keratinocytes are thought to be a major source of pro-angiogenic cytokines (VEGF, IL-8) but the precise mechanism for angiogenesis in psoriasis is still unknown. [4]

Morphometric analysis uses special software which gives a quantitative dimension to histopathology. Histolopathology can, at the best quantify the grade of epidermal thickness as mild, moderate or severe but morphometry can give a precise quantification of the epidermal thickness. Similarly, if blood vessels are stained using the CD-34 antibody, morphometry can measure the exact diameter and cross sectional area of the blood vessel.

The quantitative correlations of microvascular and epidermal characteristics with degree of dermal inflammation in psoriasis have not been investigated. We undertook this present study to evaluate a series of psoriatic biopsies using morphometry to objectively grade the degree of angiogenesis, the amount of epidermal hyperplasia and the severity of inflammation.

A total of 50 patients of newly diagnosed and confirmed psoriasis vulgaris presenting to the dermatology department over duration of 3 years (01 Nov 2008-31 Oct 2011) were included in the study after obtaining institutional ethical clearance. Informed consent was obtained from all patients. Patients on any mode of therapy were excluded. We studied microvessel density (MVD), microvessel caliber (MVC), inflammatory cell density in dermis (INFLCD), ratio between inner and outer epidermal length (RIOEL), maximum epidermal thickness (MaxET), minimum epidermal thickness (MinET) and the difference between MaxET and MinET (DMMET).

Histopathological evaluation and immunohistochemistry for CD-34

Morphometric analysis was performed on CD-34 immunostained sections using a computerized digital photomicrograph system (Dewinter Optical Inc. with Digi Eye 330 digital photomicrography camera and Biowizard 4.2 Image analysis software) [Figure - 1]a. The measuring scale of image analysis software was properly calibrated with the standard scale, as per instruction given in the software manual. Images were processed using the software to get sharp microvessel boundary before performing the measurement. Images from five high power fields (400×) in the hot spot area were recorded for each sample. Microvessels in these fields were counted and the MVD was calculated. The microvessels which appeared circular and elliptical in the section were used to get mean MVC. For the elliptical case, the minor axis of the vessel was considered as its caliber. The microvessel caliber was measured using the software [Figure - 1]a. 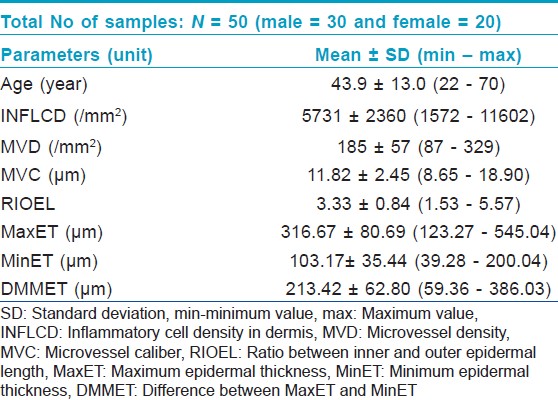 Table 1: Morphometric analysis of 50 patients of psoriasis. The mean values with SD and range of the parameters are presented

Distribution of sample with studied parameters

The MVD showed very weak positive correlation (r = 0.226, P = 0.114), whereas the MVC exhibited moderate positive correlation (0.645, P< 0.0001) with INFLCD. Scatter plots of microvessel parameters: MVD and MVC versus INFLCD for the all samples with linear regressions are presented in [Figure - 3]a,b.

The pathogenesis of psoriasis centers on epidermal hyperplasia, angiogenesis and inflammation. These three factors were analyzed objectively and inferences were drawn based on the data.

We found that there was a significant increase in the microvessel caliber (MVC) with the inflammatory infiltrate. The correlation between the vessel density (MVD) and inflammation showed a significantly less correlation indicating that probably rather than the proliferation of blood vessels, dilatation of preexisting blood vessels is of greater significance.

A series of experiments by Mor et al.,[5] proved that T-cells can synthesize and secrete VEGF. The role of angiogenesis as a damaging factor in retinitis due to T lymphocyte VEGF secretion has been established. [6] Our study also suggests that lymphocytes perhaps release angiogenic factors that induce capillary proliferation and dilatation. As an extension of this study, if the role of T lymphocytes in the production of VEGF in psoriasis can be established, it will further establish the correlation between capillary dilatation and inflammation.

Secondly, there was also a significant association between inflammation and epidermal thickness. This was particularly relevant to the maximum epidermal thickness and no correlation was observed with the minimal epidermal thickness. Keratinocytes can be viewed as an integral part of the skin-resident immune system; because they may act as antigen presenting cells (APCs), produce innate immune mediators, and contribute to the skin homing and local activation of immune cells. Keratinocytes respond to microbial stimuli by producing large amounts of cytokines (e.g. TNF-α, IL-1β, IL-6 and IL-18), chemotactic chemokines [e.g. IL-8 and CCL20 (CC chemokine ligand 20)] and antimicrobial peptides [e.g. HBD (Human β-Defensin)-2, HBD-3 and LL37]. [7],[8],[9] It is likely that the production of cytokines by keratinocytes is responsible for the accumulation of the inflammatory infiltrate in psoriasis.

However, the role of T-cells per se can not be ignored. It is believed that abnormal regulation of T-cells is a primary factor in the pathogenesis of psoriasis. This abnormal regulation coupled with interaction between keratinocytes and complex cytokine network is involved in the pathogenesis of the disease. [10],[11]In vitro studies show that lesional skin infiltrating CD4 + T-cells release factors that increase keratinocyte proliferation. [12] Also, an injury to defective keratinocytes could activate synthesis and release of cytokines. These cytokines are responsible for T-cell activation to a greater extent than cytokines secreted from normal epidermal cells. [13] These activated T cells then secrete cytokines and growth factors themselves which causes a further proliferation of keratinocytes and thus establish a vicious cycle of events. This cycle would explain our observation that there was a significant correlation between the degree of maximum epidermal thickness and the inflammatory infiltrate. Since the minimum epidermal thickness is not an index of epidermal proliferation, it would also explain why the degree of inflammation does not correlate with the minimal epidermal thickness.

Finally, there was also a significant correlation between the epidermal thickness and the MVC. This significant correlation extended to the maximum but not the minimum epidermal thickness. It is believed that vascular endothelial growth factor (VEGF) and interleukin-8 released from keratinocytes may contribute to the vascularization seen in psoriasis. [14] Another study showed that epidermal VEGF production is required not only for the development of dermal angiogenesis, but also as an autocrine regulator of epidermal hyperplasia. [15] In this study, we did not evaluate the VEGF or IL-8 levels; however, our findings on the correlation between epidermal thickness and MVC suggests that some angiogenic factor released by the thickened epidermis may be responsible for the capillary dilatation. It is not clear if epidermal VEGF stimulates epidermal hyperplasia directly, or through other downstream, paracrine mechanisms.

We believe that epidermal hyperplasia and inflammation are two of the factors which are responsible for the pathogenesis of psoriasis. Both epidermal hyperplasia and inflammation release cytokines which may set up a vicious cycle of events resulting in the secretion of more cytokines. This is in consonance with other studies who have suggested that psoriasis is primarily a T lymphocyte based disease. [16],[17] Several treatment modalities are now based on this concept. [18] We also suggest that epidermal VEGF is a key mediator in the pathogenesis of both angiogenesis and epidermal hyperplasia. Immunostaining for VEGF and correlating with the above parameters will confirm this hypothesis. The hypothesis that VEGF inhibitors could have a therapeutic role in psoriasis has been suggested by other authors. [19] This could also correlate with the high probability of angiogenesis being a major pathogenetic factor, as quoted by newer studies. [20]

Limitation of the study

This is a preliminary observation of various morphometric parameters in psoriasis vulgaris and their correlations. Further studies with large sample sizes will be required to substantiate all the findings and proposals for pathogenesis made in this study.