Multibacillary leprosy: Follow up observations on 19 patients treated with 12 monthly doses of rifampicin, ofloxacin and minocycline therapy in Agra

Triple drug combination using World Health Organization-multidrug therapy (WHO-MDT), as recommended for multibacillary (MB) patients, given for 24 or 12 months is effective in producing a clinical response as also in killing a significant proportion of causative Mycobacterium leprae. Further, even after completion of the course of treatment, patients continue to improve with a gradual reduction of bacterial load as measured by decreasing bacillary index (BI). However, irregularity of treatment has been a major concern on account of the long duration of treatment with much of the therapy being self-administered, unsupervised [1],[2] . In addition occurrence of adverse drug effects, in particular related to dapsone and unacceptable coloration related to clofazimine, may have affected the continued intake of MDT for long periods. The long duration of therapy is required because of the milder (predominantly bacteriostatic) action of dapsone and clofazimine.

With the availability of other drugs, such as ofloxacin and minocycline that are almost as effective as rifampicin against Mycobacterium leprae, studies were undertaken to see if treatment could be shortened [3] . Early trials using single dose combination of rifampicin, ofloxacin and minocycline (ROM) in single lesion PB patients had shown that one dose of the ROM combination was almost as effective as the 6 months WHO-PB treatment [4] . A trial of single dose ROM therapy, in patients with 2-5 lesions was also published. [5] This led us to consider testing of this regimen given intermittently (as monthly supervised ROM) in MB patients as this would probably be more acceptable to patients and would be more amenable to supervised administration. A study was therefore initiated to compare long-term clinical efficacy of 12 months WHO-MDT with 12 monthly doses of ROM in MB patients.

Based on the expectation of almost equal efficacy of monthly ROM and WHO-MB therapy, it was planned to include MB patients randomly allocated to two groups. Within a few weeks after the start of intake into the trial, the supply of ROM from WHO/National Leprosy Elimination Programme was discontinued due to unrelated reasons and hence the study had to be abandoned. By that time only 21 patients had been put on ROM treatment while patients were continued to be allocated to WHO MB-MDT regimen. Of the 21 in the ROM group, 19 took the full course of supervised 12 months ROM therapy and have been followed-up for more than 5 years after completion of treatment. The remaining 2 patients dropped out because of diarrhoea, which they attributed to the drugs. This short communication details the course of disease at completion of treatment and its outcome. Ethical approval from our Institute ethical committee and informed consent from patients were taken before the start of therapy.

We included predominantly adult patients (mean age ± standard error of the mean, 40.2 ± 4.0 years, median 45 years), of whom 13 were male and 6 female. The mean duration of illness before start of treatment in this group was 34.7 ± 4.9 months. Most of the patients (18 of 19) had multiple skin patches (6-9 patches in 6 patients, and 10 or more lesions on the skin in 12 patients) and acid fast bacilli (AFB) were not seen in skin smears. One patient had shiny skin all over and showed acid fast bacilli positivity of 3+. Except one patient, all had thickened nerve/s. The number of thickened nerve/s ranged from 0 to 8 (mean 3.3). Three of the 19 patients had grade 2 deformities. The patient′s clinical condition was assessed on completion of treatment and they were periodically followed-up for disease activity status, complications/reactions and relapses after completion of treatment. During the follow-up, one of the patients died of an unrelated cause while two others were lost to follow-up within 6 months. The mean follow-up in the remaining 16 patients was 6.81 ± 0.27 years [Table - 1]. 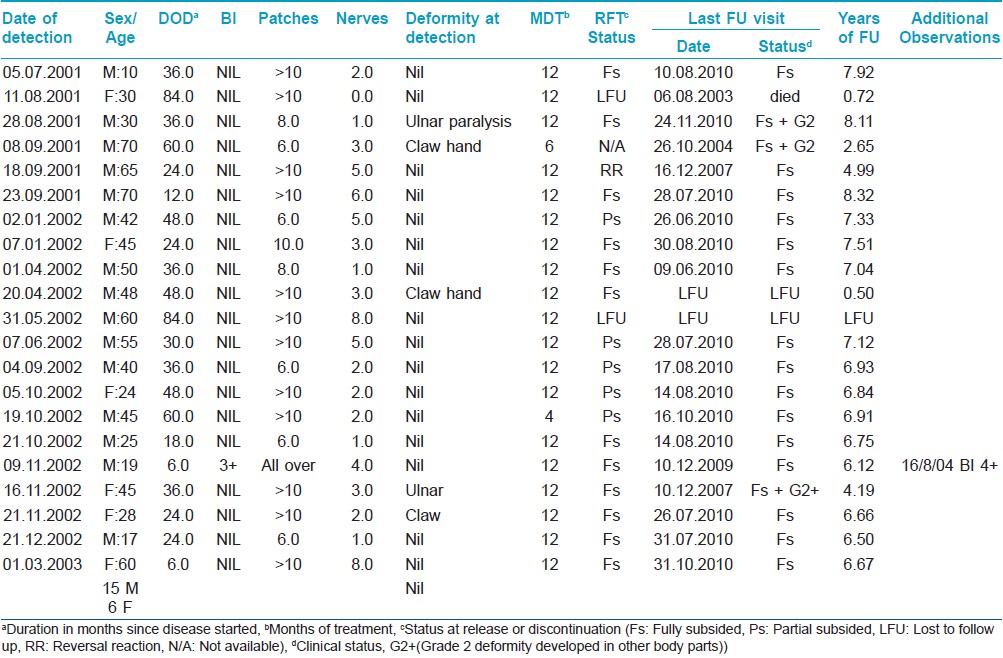 At the completion of 12 monthly doses of ROM, two thirds of the patients (11 of 16) showed a distinct decrease in erythema and swelling of the lesions. In most of them the lesions were almost flat by this time. Four patients (21%) were observed to have partially improved with some decrease in erythema and induration of the lesion. One patient, at S No. 4, had reversal reaction. In this patient, the lesions had suddenly become swollen and scaly. At the end of treatment, the diffuse lepromatous patient (at S No. 12), too showed clinical improvement. However, his skin smears now showed B I of 4+, though most of the AFB were granular.

All the patients were observed to have gradually improved and to have clinically inactive disease during the course of follow up. The only smear positive patient became negative during the course of follow up. Patients with established claw hands, at the point of inclusion, did not deteriorate further as they had continued to take care of hands and had physical therapy. Two patients developed fresh deformities, viz. ulnar claw, during the course of follow-up. As there were no symptoms or signs of reaction or neuritis and the deformities progressed insidiously, silent nerve damage (neuritis) was diagnosed in both cases. None of the patients relapsed or developed new lesions during the 6 year follow-up period. This could be because most patients were skin smear negative at intake. In addition, the small sample size may have made it difficult to observe relapses, which are expected to occur very rarely

Although the number of patients treated with ROM was fairly small, the progress and follow-up does indicate that monthly supervised administration of ROM is an effective alternative regimen. A substantial number of patients showed improvement, though not complete regression, by the end of 12 months of therapy and continued to improve after stoppage of therapy as already known with WHO MB-MDT regimen [6] . The bacterial load of the single smear positive patient included in the study continued to decrease after stoppage of ROM, though some initial increase in BI had been recorded in this case. The acceptability of the treatment regimen was quite satisfactory as only 2 of the 21 cases could not complete the schedule of 12 months treatment. Even in these two cases the patients who ascribed diarrhea to ROM, may have had loose stools due to an infection of the gut which is common in the tropics. This is in contrast to the reported high (34.5% and 60%) treatment default [3] , mostly due to drug intolerance with MDT as recently reported. Our results suggest that monthly ROM is convenient and is better accepted by patients because of fewer side effects. The regimen does not seem to increase the risk of reaction during or after completion of therapy as only one patient had reversal reaction. This is noteworthy as ROM lacks the anti-inflammatory advantage of clofazimine. However it could also be argued that silent neuritis in two patients during follow-up may not have developed if clofazimine had been administered. The ultimate efficacy or robustness of any regimen is determined by the observed relapse rates that follow its completion. Though it is not possible to comment on this aspect due to the small sample size, the absence of relapse in all 16 patients during more than 6 years of follow-up is reassuring and indicates the potential of ROM to eliminate leprosy faster. However, larger multi-centric comparative studies of ROM with WHO MB-MDT are required to evaluate the role of ROM in containing leprosy disease and its transmission.