Waardenburg syndrome is a rare genetic disorder of neural crest cell development characterized by the association of craniofacial dysmorphisms (synophrys, telecanthus, broad and high nasal root and lower lacrimal dystopia), pigmentation defects (heterochromic and bright hypochromic blue irides, hypopigmented spots on the skin and white forelock or early graying) and sensorineural congenital hearing impairment.[1] Four variants of Waardenburg syndrome have been described. Of these, Waardenburg syndrome 1 and 2 are the most common variants and are inherited in a autosomal dominant pattern in most of the cases. 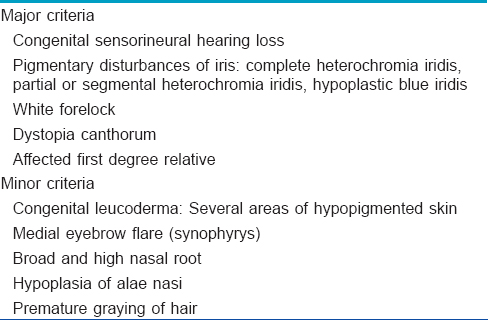 A 9-month-old boy, the first child of a non-consanguineous marriage, was born following a full-term uncomplicated vaginal delivery and presented with a white forelock and multiple brown colored areas all over the body since birth. There were two first-trimester abortions in the mother prior to this pregnancy. Family history was not contributory. The child was active and feeding well.

Clinical examination revealed a white forelock (poliosis) in the frontal area with an underlying depigmented patch [Figure - 1]a. There were multiple, ill-defined, dark brown, hyperpigmented patches ranging from 0.5 cm to 7 cm all over the body, relatively sparing the face [Figure - 2]. In addition, a few ill-defined hypopigmented patches with islands of hyperpigmentation within them were noted on the lower abdomen and thighs [Figure - 3]. The nasal root was broad. On ophthalmological examination, dystopia canthorum and bilaterally blue iridis were found [Figure - 1]b. Systemic examination including cardiovascular and orthopedic examination was normal and routine laboratory investigations including complete blood count, liver and kidney function tests, chest X-ray, electrocardiogram and echocardiography were normal. Brainstem evoked response audiometry revealed bilateral sensorineural hearing loss. Physical development and milestones were appropriate for age.

The diagnosis of Waardenburg syndrome 1 was made as per the Waardenburg Consortium criteria. Owing to the presence of multiple hyperpigmented patches, conditions such as LEOPARD syndrome and neurofibromatoses were considered as differential diagnoses but were subsequently ruled out on the basis of clinical examination and relevant investigations.

Waardenburg syndrome 1, which is one of the most common subtypes, is caused by mutations in the PAX3gene (2q35), a transcription factor for the microphthalmia-associated transcription factor gene, which in turn activates a number of genes associated with melanogenesis such as those encoding tyrosinase as well as those mediating survival of melanocytes through Bcl-2. The PAX transcription factor is the key component in neural crest differentiation, melanoblast activation, melanoblast migration and in the development of facial bones, facial cartilage and the inner ear. The syndrome has variable penetrance and expression. Sporadic cases have also been reported.

The authors certify that they have obtained all appropriate patient consent forms. In the form, the legal guardian has given his consent for images and other clinical information to be reported in the journal. The guardian understands that names and initials will not be published and due efforts will be made to conceal patient identity, but anonymity cannot be guaranteed.