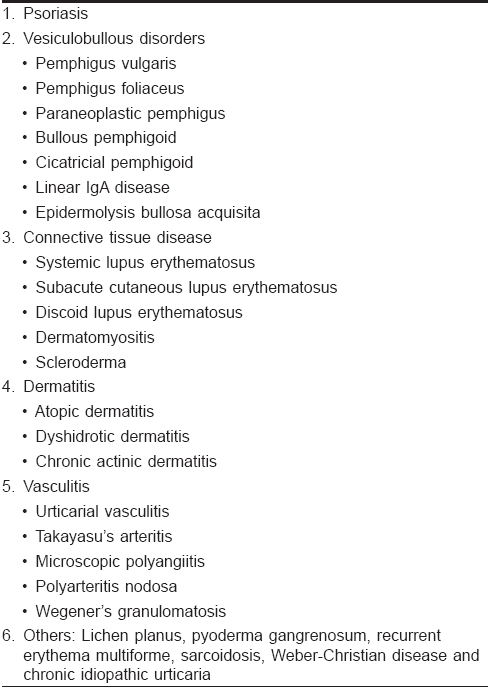 Mycophenolate mofetil (MMF) is a novel immunosuppressant in the armamentarium of dermatologists, which is used for the treatment of immune-mediated skin disease. It is a prodrug of the active compound, mycophenolic acid (MPA). Originally isolated from cultures of Penicillium stoloniferum as a fermentation product, MPA was first recognized as a lipid-soluble, weak organic acid. [1] Currently approved for the prevention of organ rejection, its "off-label" indications in various dermatological disorders are increasing, although controlled trials are needed to know its real efficacy.

Mycophenolate mofetil is a semisynthetic 2-morpholinoethyl ester. It is a prodrug, which is rapidly converted in vivo to the active metabolite, MPA by plasma esterase. MPA is a potent immunosuppressive agent and acts as a selective, uncompetitive and reversible inhibitor of the enzyme, inosine monophosphate dehydrogenase (IMPDH), a key enzyme in the de novo purine biosynthesis pathway. IMPDH is an enzyme required for the conversion of inosine monophosphate (IMP) and xanthine monophosphate (XMP) to guanosine monophosphate, which is an important substrate for the synthesis of DNA and RNA [Figure - 1]. [2],[3]

T and B lymphocytes depend upon de novo synthesis of purines for their proliferation, whereas other cell types can utilize the salvage pathway, i.e., hypoxanthine-guanine phosphoribosyl transferase pathway for their proliferation. [5] MPA thus, has more potent cytostatic effects on T and B lymphocytes and causes decreases in the levels of immunoglobulins and delayed type hypersensitivity responses. [6] MMF also prevents the glycosylation of lymphocyte and monocyte glycoproteins that are involved in adhesion to endothelial cells. Thus, it inhibits chemotaxis, impairs antigen presentation and induces immune tolerance. [7]

MMF is well absorbed orally with a mean bioavailability of 94% and is predominantly bound to albumin. Food intake decreases the C max level due to which MMF should be taken on an empty stomach. In the liver, it is rapidly conjugated to form the pharmacologically inactive mycophenolic acid glucuronide (MPAG). [8],[9]

After absorptoin, MPA shows two peak levels in plasma. The first peak occurs approximately one hour after intake and the secondary peak is seen six to eight hours later. The first peak is due to the distribution of the drug and the second peak is due to enterohepatic recirculation of MPAG which is hydrolyzed back to MPA in the gastrointestinal tract by beta-glucuronidase. The elimination half-life of MPA is approximately 18 h and approximately 87% of the oral dose is excreted as MPAG in the urine and 6% is eliminated in feces. [9],[10]

MMF is available as 250 mg capsules, 500 mg tablets and a powder for oral suspension (200 mg/ml). It is available as a lyophilized, sterile powder in a vial, which contains the equivalent of 500 mg MMF as the hydrochloride salt for intravenous administration.

In adults, the usual dose of MMF ranges from 1.25 to 2 g day. The dose can be tapered to 1 g daily in divided doses with improvement in skin conditions. In pediatric patients, it is administered as a 600-mg/m 2 dose every 12 h up to a maximum daily dose of 2 g. Dose reduction should be considered in patients with severe renal impairment. [11],[12]

Enteric-coated mycophenolate sodium (ECMS) is available as delayed-release tablets containing either 180 or 360 mg of MPA. It can be used as an alternative in the patients with adverse MMF-induced gastrointestinal effects. [13]

The only FDA-approved indication of MMF is for the prophylaxis of organ transplant rejection in conjunction with cyclosporine and corticosteroids. [14] It was first used in psoriasis in 1975 and since then, case reports and clinical trials document its use in various dermatological conditions as "off-label" indications [Table - 1]. MMF has been successfully used either as monotherapy or in combination with systemic steroids or as a steroid-sparing agent. MMF is best suited for individuals in whom other systemic immunotherapies are contraindicated because of hypertension, impaired renal function or liver disease. [15]

Although early reports have shown good efficacy and tolerability of MMF, randomized clinical trials with long surveillance periods are needed to document the efficacy and long-term safety of the drug in various skin diseases.

MMF is mainly used as a steroid-sparing agent in blistering disorders. Mimouni et al. demonstrated complete remission of pemphigus in 22 out of 31 patients of pemphigus vulgaris (71%) and 5 out of 11 patients of pemphigus foliaceus (45%), who were recalcitrant to standard therapies with an average duration of 22 months. [21] Other studies have also demonstrated the effective use of MMF in other blistering disorders such as bullous pemphigoid, [22] paraneoplastic pemphigus, [23] cicatricial pemphigoid, [24] linear IgA disease [25] and epidermolysis bullosa acquisita. [26]

Multiple studies have proved the efficacy of MMF in systemic lupus erythematosus (SLE). It has been used effectively in diffuse proliferative lupus nephritis, [29] SLE-associated immune thrombocytopenia, [30] SLE with neuropsychiatric symptoms [31] and also in the prevention of clinical relapse of SLE. [32] Subacute cutaneous lupus erythematosus not responding to steroids, immunosuppressants or antimalarials and resistant cases of discoid lupus erythematous of palms and soles were treated successfully with MMF. [33],[34]

In dermatomyositis, MMF alone or in combination with intravenous immunoglobulins (IVIG) can not only induce long-lasting remission but can also avoid adverse effects of long-term steroids. [35] In patients with diffuse scleroderma with recent, clinically apparent alveolitis, early treatment with MMF and corticosteroids may represent an effective, well-tolerated and safe alternative therapy. [36]

MMF has been used in both small and large vessel vasculitis (Takayasu′s arteritis). [37],[38] It has been used with success for induction and maintenance therapy either alone or in combination with oral steroids.

The most common dose-related side effects are gastrointestinal and genitourinary. Gastrointestinal (GI) symptoms include nausea, diarrhea, abdominal cramps, constipation, vomiting and anorexia while genitourinary symptoms include urgency, frequency, dysuria, hematuria and sterile pyuria. [11] GI symptoms are usually managed either by dose reduction or by splitting the total dose into three or four doses per day.

Being an immunosuppressant, MMF increases the risk of bacterial, fungal and viral infections and has a long-term risk of carcinogenicity like lymphomas and skin malignancies. [2],[9]

MMF is absolutely contraindicated in patients with known hypersensitivity to any component of the drug and is included in pregnancy category C. [11],[15] Peptic ulcer disease, renal disease, hepatic disease, lactation and cardiopulmonary disease are the relative contraindications. [9]

Drugs such as acyclovir, ganciclovir and probenecid inhibit the tubular secretion of MMF and hence, increase its level while drugs like antacids (containing aluminum and magnesium), ferrous sulphate, metronidazole and fluoroquinolones decrease the absorption and bioavailability of MMF and decrease its blood level. Cholestyramine inhibits enterohepatic recirculation of MMF and decreases its level. Salicylates and furosemide compete with MMF for plasma albumin binding and hence, increase the elimination of MMF. Mycophenolic mofetil does not seem to interact with other immunosuppressive agents except azathioprine. A combination of MMF and azathioprine should not be used as both block purine synthesis by the same pathway. [2],[9],[11],[15]

Complete physical examination should be carried out at each visit or at least every 6-12 months to look for any opportunistic infections and malignancies. Complete blood counts should be performed at baseline and biweekly during the first 2-3 months and then, monthly through the first year. Liver function and renal function tests should be performed at baseline and serum transaminases should be repeated after one month and then, quarterly. During follow-up, treatment should be discontinued if the leukocyte count is less than 3500-4000 cells/mm 3 . [3],[4],[5],[6],[7],[8],[9],[10],[11]