Nail dermoscopy (onychoscopy) findings in the diagnosis of primary onychomycosis: A cross-sectional study

Onychomycosis caused by dermatophyte, nondermatophytic molds or yeasts,[1] has a prevalence of 5% worldwide[2] and 0.5–5% in India.[3] Though its diagnosis is mainly clinical, laboratory confirmation is essential, as prolonged systemic treatment is needed in the majority. In addition, in the absence of laboratory confirmation, it is difficult to exclude treatment failure when there is lack of therapeutic response.[4] Diagnostic modalities for onychomycosis include direct microscopic examination with potassium hydroxide immunofluorescent microscopy with calcofluor white, fungal culture, histology with periodic acid–Schiff staining and polymerase chain reaction.[5] Dermoscopy of nail or onychoscopy is an upcoming diagnostic tool with ever-expanding indications beyond pigmented nail disorders. It is a noninvasive, quick, reproducible and office-based procedure. Limited literature exists pertaining to onychoscopic features of onychomycosis. Piraccini et al. described distinctive dermatoscopic features exclusive to distal lateral subungual onychomycosis.[6] Jesús-Silva et al. described the presence of spiked pattern, longitudinal striae pattern, linear edge pattern and distal irregular termination pattern in onychomycosis.[7]

In this study, we identified onychoscopic features in different clinical types of onychomycosis and compared its diagnostic utility with that of direct microscopic examination with potassium hydroxide, mycological culture and periodic acid–Schiff stained nail clippings.

It is a cross-sectional observational study carried out in the University College of Medical Sciences and GTB hospital during 2015–2017 and was approved by the institutional ethics committee.

A hundred adult consenting patients with clinical features suggestive of onychomycosis were recruited. Patients with nail pathology attributable to noninfective preexisting disease and who had received topical or systemic antifungal in the last 1 and 3 months, respectively, were excluded. In addition, pregnant and lactating women and those with severe systemic co-morbidities were not included.

A detailed history and physical examination were carried out in each subject and findings were recorded in a predesigned case record form.

A thorough examination of all the fingers and toenails for the various signs of onychomycosis was undertaken after cleansing with alcohol. Clinical photographs of the involved nails were taken and stored in JPEG format.

A single representative nail was chosen from each subject for onychoscopy. Onychoscopy with a DermLite DL3 dermatoscope (3Gen, San Jan Capistrano, CA, USA) attached to Sony Cybershot camera (DSC-W800 5x magnification) was performed, giving a magnification of 10x. Polarizing and non polarizing mode was used as needed and isopropyl alcohol was used as the interface medium.

All samples were collected from the most proximal involved area of the affected nail to minimize contamination. Depending on the clinical presentation nail clippings, nail plate scrapings, subungual debris and nail bed scrapings were collected.[8]

On direct microscopic examination in 20% potassium hydroxide, long-branched, filamentous hyphae with or without arthrospores were observed in dermatophytic infection, pseudohyphae in candidal onychomycosis and mycelia, arthrospores or yeast cells in nondermatophytic mold onychomycosis. A part of the nail clipping was sent in a sterile envelope for inoculation on Sabouraud's dextrose agar medium with and without cycloheximide (0.5g/l), at 25°C for optimal growth. In the case of growth, colony characteristics were studied on lactophenol cotton blue wet mount preparation. The culture was considered negative in the absence of growth after 4 weeks of incubation. The most proximal part of the affected nail plate was biopsied, fixed in 10% buffered formalin solution and sent for histopathology for hematoxylin and eosin and periodic acid–Schiff staining. Mycological etiology was confirmed when neutrophilic exudates and crusts were evident on histopathology and red-colored fungal elements were appreciated in periodic acid–Schiff stained nail clippings.

The data were coded and entered into Microsoft Excel. It was then analyzed for percentages, rates, proportions and association, using a Chi-square test of significance, where P < 0.05 was considered significant.

A patient who showed evidence of fungal elements either on with potassium hydroxide, culture or histopathology was designated as a case of onychomycosis. Eighty-eight patients qualified to be cases of onychomycosis. The remaining 12 served as control. 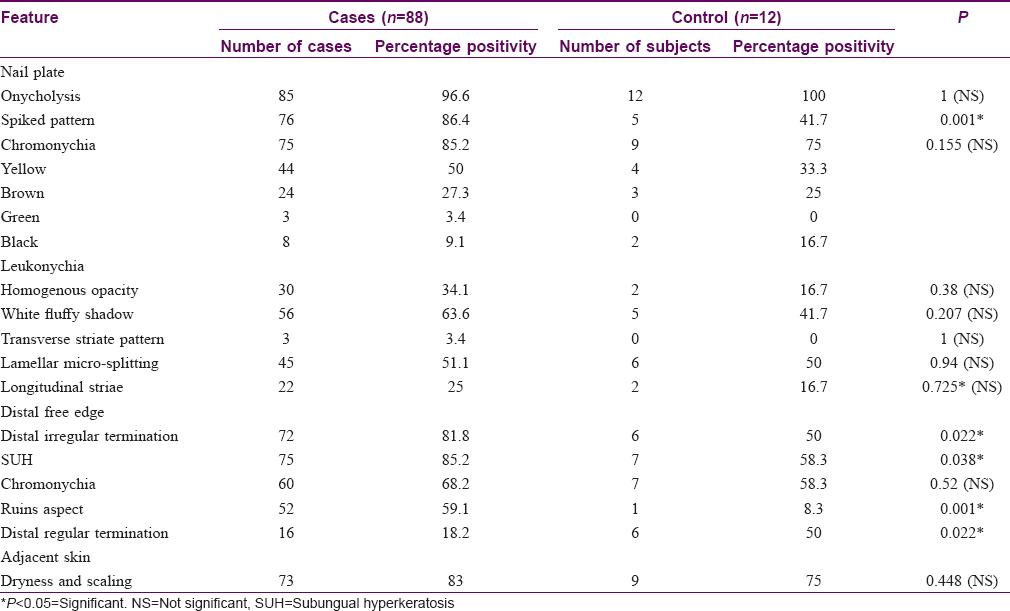 In our study, we came across the following new patterns on onychoscopy [Table - 2].

Table 2: The frequency of the newly described onychoscopic features, observed in a different clinical variant of OM

As endonyx was not observed among our patients, associations with the same could not be established. We found no associations of the previously mentioned features with the causative organisms.

The frequency of onychoscopic pattern with each clinical variant was noted [Table - 3]. Following significant associations (P < 0.05) were noted with regard to the onychoscopic features-

Table 3: Onychoscopic features in the different variants of OM

Onychoscopic features in the control group

Among the 12 control who did not suffer from onychomycosis, onycholysis was seen in all cases with the spiked pattern being present in 5 (41.7%). Subungual hyperkeratosis was seen in seven (58.3%) cases with ruins aspect being present in only one case. The distal edge of the nail plate had a regular pattern i.e. distal regular pattern six (50%) cases. The longitudinal striae pattern was evident in two (16.7%). The association of distal regular pattern was significant for ruling out onychomycosis (P < 0.05).

Onychoscopy is a simple, rapid, office-based diagnostic tool to diagnose onychomycosis as compared with time-consuming and labor-intensive methods like direct microscopic examination, culture or polymerase chain reaction. There are a limited number of studies of onychoscopy in distal lateral subungual onychomycosis variant of onychomycosis [Table - 4], whereas the present study included all clinical variants of onychomycosis.[6],[7],[9],[10],[11],[12]

Onycholysis was the most frequent observation present in 85 (96.6%) cases. The three cases where onycholysis was absent belonged to the superficial onychomycosis variant. Onychoscopy had the distinct advantage of delineating the pattern of the proximal edge of the onycholytic area. A spiked pattern was noted in 76/88 (86.4%), linear pattern of termination was seen in the rest 12/88 (13.6%). The association of spiked pattern with onychomycosis was found to be statistically significant (P < 0.05). This finding is concordant with previous studies conducted by Yadav and Khopkar (100%),[10] Piraccini et al. (100%),[6] Jesús-Silva et al. (23.8%)[7] and Nargis et al. (78.3%).[11] We observed chromonychia of the nail plate in 75/88 (85.2%) cases, most frequently being yellow (50%) followed by brown (27.3%), black (9.1%) and green (3.4%). In a recent study, similar pattern of chromonychia (yellow >brown >black: 70%>51%>24%) has been described.[6] They also described white chromonychia in 59% cases, a statistically significant finding in diagnosing onychomycosis. Previous studies have variously described white discoloration of the nail bed or plate as opacity (Di Crignis),[12] white chromonychia (Piraccini BM)[6]/leukonychia. In the present study, leukonychia has been studied separately in detail and classified into white fluffy shadows, transverse striate pattern or homogenous opacity. These morphological types of leukonychia, though present distinctly in cases with onychomycosis, have not been found to be statistically significant for diagnosing onychomycosis, probably because of smaller sample size. In addition, as onychoscopy of onychomycosis is in an evolutionary phase, a uniform nomenclature to describe patterns of chromonychia may be used in the future to arrive at conclusive evidence.

Subungual hyperkeratosis was observed in 75 (85.2%) cases, of which 52 (59.1%) showed ruins aspect/ruinous appearance. The association of subungual hyperkeratosis, as well as ruinous appearance with onychomycosis, was statistically significant (P < 0.05). Subungual hyperkeratosis with ruins aspect has been described in all 10 nails of onychomycosis studied by De Crignis et al.[12] and 7/21 (33.3%) nails studied by Yadav and Khopkar,[10] suggesting that subungual hyperkeratosis could be one of the key features with potential utility in diagnosing onychomycosis. Distal irregular termination of the nail plate was observed in 72 (81.8%) cases, with a significant association with onychomycosis (P < 0.05). This observation is in contrast with the study conducted in 2015 where 43.2% showed distal irregular termination.[7] This inconsistency in findings may be because of the occurrence of pulverization in severely affected nails and of long disease duration. Therefore, this finding needs to be explored with respect to the severity of the affected nail and its disease duration. We also noted dryness and scaling of the adjacent skin in 73 (83%) cases. It was unrelated to the presence of tinea pedis or tinea manuum. Infected nail and surrounding skin may be neglected about daily cleansing and grooming causing dryness and scaling. It may also be because of the onychopathy per se or may result from the application of topical medication. Though Nakamura and Costa studied dryness and scaling onychoscopy, it was not commented upon in detail.[9] In our study, irregularly placed fine transverse splitting of the nail plate was observed on onychoscopy in 45 (51.1%) of cases. This observation has not been described previously. We have named this finding as lamellar micro-splitting as it was not visualized on naked eye examination. Although it has not been found to be of any statistical significance in our study, detailed evaluation with a larger sample size could probably give results that are more conclusive.

The sensitivity and specificity of significant onychoscopic features [Table - 5] to diagnose onychomycosis were calculated with a sample size of 88/100 cases of onychomycosis, the remaining 12 serving as the negative control. The sensitivity for a spiked pattern for diagnosing onychomycosis was 86.4% and specificity was 58.3%. Corresponding figures for subungual hyperkeratosis were 85.2% and 41.7%, for distal irregular termination were 81.8% and 50% and for ruins aspect were 59.1% and 91.7%, respectively. The specificity of combined features [Table - 6] of spiked pattern and ruins aspect, ruins aspect and distal irregular termination was enhanced to 91.7% for each combination. Such a result makes way for larger studies wherein criteria can be established for diagnosing onychomycosis based on multiple onychoscopic features in combination. 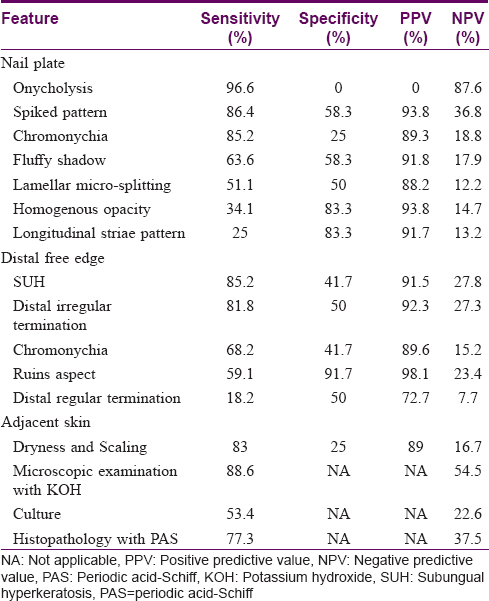 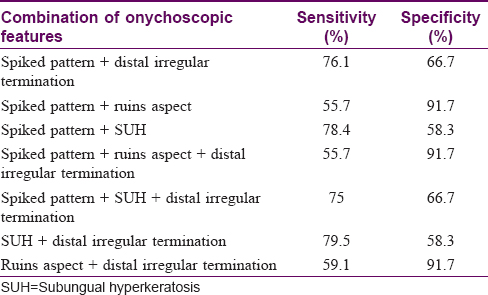 Table 6: Sensitivity and specificity of significant onychoscopic features in combination

Our study had a limitation of a smaller sample size, especially the number of controls, which decreased its statistical relevance.

Onychoscopic features like spiked pattern, distal irregular termination and ruins appearance have a significant association with onychomycosis and its variants. We identified would few newer features, like white fluffy shadows, transverse striate pattern, homogenous opacity and lamellar micro-splitting in the diagnosed cases of onychomycosis. More studies can be conducted with a larger sample size, to establish these associations with certainty.

The authors certify that they have obtained appropriate consent forms from all patients. In the form, the patients have given their consent for their images and other clinical information to be reported in the journal. The patients understand that their names and initials will not be published and due efforts will be made to conceal their identity, but anonymity cannot be guaranteed.