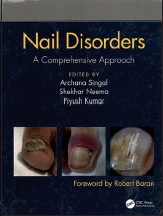 The book “Nail disorders: A Comprehensive Approach,” edited by Drs. Archana Singal, Shekhar Neema and Piyush Kumar is well designed with 38 chapters divided into 12 parts. Nail disorders are an interesting group of conditions which are not given enough importance by postgraduates. Practicing clinicians are frequently unsure about the approach to their diagnosis and therapy. The identification of various nail disorders sometimes becomes difficult if knowledge about basic anatomy is not clear. This book is designed to provide an elaborate review about the anatomy of nail unit, physiological changes in nails especially in children and elderly population, approach to examination, diagnostics and detailed description of various nail abnormalities. The book also elucidates nail abnormalities associated with inflammatory, infective and psychocutaneous conditions. Subsequent chapters describe nail involvement in systemic, occupational and drug-related conditions. A separate part of the book describes all the benign and malignant tumors of the nail unit. It also deals in detail with the surgical management of nail diseases including how to anesthetize the nail and types of nail biopsy. There is a special mention about less discussed topics like photography of the nail unit. The book covers nail cosmetics including nail care, polishes and lacquers and moisturizers used for the nail.

The book starts with embryological development of the nail unit with sequential figures according to gestational age. Nail unit anatomy is very well described in relation to its applied aspects in surgical management. There is a diagrammatic representation of how arteries and nerves arborize at the distal interphalangeal joint, clarifying the site to administer anesthesia. The book also dwells on the role of immunohistochemical markers like ki-67 which are recently being employed to study nail matrix kinetics. Various nail unit signs depending on nail matrix, bed, plate or lunula involvement like brachyonychia, micronychia, melanonychia, onychodystrophy, etc., have been described with high-quality images and enumerating the common conditions associated with it. A stepwise approach to nail examination is given with recommendations to the use of natural sunlight and examination of all twenty nails with nail polish removed if applied. The book also gives a review of the nail findings in dermatological disorders such as eczema, atopic dermatitis, Beau's lines in exfoliative dermatitis, alopecia areata, Darier's disease, palmoplantar keratoderma, autoimmune blistering disorders, connective tissue diseases and drug-related nail changes.

The use of onychoscopy and nail fold dermoscopy are clearly explained with various techniques. The technique of onychoscopy has been used to identify pigmentary and other disorders. This book, in addition to these indications, provides clarity on nail disorders such as a stepwise algorithm to differentiate blood from melanin and clear distinction of Hutchinson's, pseudo-Hutchinson's and micro-Hutchinson's signs, to name a few. Onychoscopic features of psoriasis, lichen planus, Darier's disease and dermatophytosis have been described separately. Nailfold dermoscopy is used for supporting a diagnosis of connective tissue disorders, especially systemic sclerosis and dermatomyositis. Qualitative and quantitative parameters in nail fold dermoscopy have been described for normal and scleroderma pattern including capillary shape, density, length and arrangement.

The utility of imaging with radiographs have been described for osteocartilaginous tumors like subungual exostoses and osteochondromas. Benign and malignant tumors have been classified according to the source of origin and have been described in the context of clinical features, onychoscopy, histopathology, immunohistochemistry and treatment approach. Recently used modalities such as ultrasonography and color Doppler to diagnose various inflammatory, infective and neoplastic disorders have been shown with images. The book details the characteristic radiological findings of various disorders in a tabulated manner. Normal and abnormal nail histology have been described in some detail, including those relating to issues faced by pathologists while evaluating an invasive nail melanoma.

In addition to causes of nail plate abnormalities and common disorders of color, causes of green nails, yellow and brown-black nails have been mentioned. The book also gives a descriptive outline of causes of ingrown toenails and its less discussed variants-like harpoon nails. It gives various severity indices for the same like Heifetz, Mozena, Frost and Martinez. Various recently adopted techniques to prevent recurrence of ingrown toenail such as orthonyxia (nail brace) and nail tube splinting (nail sleeve) have been shown.

In addition to the characteristic nail findings in papulosquamous disorders, nail severity scores such as Nail Psoriasis Severity Index (NAPSI), Nail Assessment in Psoriasis and Psoriatic Arthritis (NAPPA), Baran's score and N-nail have been described. In addition to fungal infections, there is a mention of nail disorders of other infective etiologies including verrucae, herpes, bacterial infections and leprosy with their medical and surgical management.

Disorders of the periungual tissues have been described with well-delineated severity scale and treatment algorithms. The authors refer to a concise flowchart for congenital and hereditary nail disorders. Similarly, nail changes in the elderly have also been referred to with high-quality images, e.g., onychauxis, onychoclavus, hammer toe, onychophosis, to name a few.

The book also illustrates basics of nail surgery and defines preoperative steps to reduce bacterial load in addition to use of special dressing like the “Y” dressing. The indications and types of nail bed and matrix biopsy have been shown with diagrams and images.

In the nail cosmetics portion, recommended do's and don'ts in manicure/pedicure practices have been enunciated. Comparatively newly developed methods like acrylic and gel nails have been shown.

There is a mention of uncommon conditions like nail degloving syndrome and conditions associated with it: hang nail, brittle nail syndrome, parakeratosis pustulosa and ectopic nails.

There are informative tables giving a well-defined summary of the chapters and take-home messages. The book being detailed and, at the same time, very well structured, is a very useful tool for postgraduate students as well as practicing clinicians. Considering the growing trend of nail involvement in various diseases and the ambiguity related to approach to these conditions, this book is a good read to obtain in-depth knowledge about nail disorders.

The only small shortcoming was the fact that chapters did not follow a common format and some chapters were somehow shorter on images as compared to others.

Overall, this is a painstaking and worthwhile effort which would be an asset to any dermatologist with more than a passing interest in nail disorders.