Nail disorders comprise of approximately 10% of all dermatologic conditions. [1] The nail unit may show specific changes that are markers for a wide range of systemic disorders. Furthermore, there are a number of heritable and non-heritable syndromes in which the nail disease is an integral part of the multisystem disorder.

Sometimes a developmental defect may be limited to the nail. Additionally, a number of dermatologic disorders may affect the nail. Consequently no dermatologic examination is complete without a detailed examination of the nails. However, the nail still remains an understudied, underutilized, yet quite an accessible structure that lends itself for examination and evaluation. Pathology in any portion of the nail apparatus results in an abnormal nail sign. Nail signs occur in the nail plate and the paronychial tissues, including the nail bed, nail fold, and the visible portion of the lunula. Among the various nail signs, we will concentrate on two common nail signs in this article (1) nail pitting (2) onycholysis.

Pits are superficial depressions within the nail plate that vary in morphology and distribution.

A pit indicates a defect in the uppermost layer of the nail plate, which arises from the proximal nail matrix. [2]

Clusters of parakeratotic cells in the stratum corneum disrupt the process of normal keratinization. As the nail plate grows outward, these parakeratotic foci are exposed to the surrounding environment and there is a gradual sloughing of these cells leaving a distinct depression within the nail plate. [2] 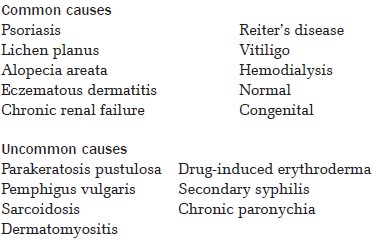 Onycholysis is defined as a distal or distal lateral separation of the nail plate from the underlying and/or lateral supporting structures (nail bed, hyponychium, lateral nail fold). When the separation begins proximally near the nail matrix, the process is called onychomadesis. Onycholysis is a common disorder. [8]

The area of separation below the nail plate appears white or yellow due to air beneath the nail. Discoloration may occur from the accumulation of bacteria, most commonly pseudomonas or yeast, for example, Candida albicans. Color change such as green may be seen due to pyocyanin from pseudomonas, black or blue discoloration may also be seen.

Onycholysis can be classified as primary (idiopathic) and secondary.

This is a painless separation of the nail from the nail bed, which occurs without apparent cause. Overzealous manicure, frequent wetting, and cosmetic solvents may be the cause. Minor trauma can cause this condition in persons who keep their nails abnormally long. The affected nail grows very quickly. [9]

Pain occurs only if there is further separation as a result of trauma or if active infection supervenes. The infective organisms include Candida albicans and pseudomonas pyocyanea.

The condition is most commonly seen in women and many cases return to normal after a few months. The longer it lasts, the less likely is the nail to become reattached, due to keratinization of the exposed nail bed.

It can be further classified into:

Numerous drugs have been reported to induce onycholysis.

In this type of onycholysis the free edge of the nail is undulated and curved upward, characteristically seen in thyrotoxicosis. [11]