New insights into leukotrichia in nonsegmental vitiligo: A cross-sectional study

Background: Leukotrichia has been considered a predictor of poor outcome in vitiligo. However, studies considering the different clinical aspects of leukotrichia in vitiligo patients are few.
Aim: Our aim was to conduct a detailed clinical study to provide insights into the relevance and associations of leukotrichia in non-segmental vitiligo.
Methods: In this cross-sectional study, vitiligo patients attending the dermatology outpatient clinic and phototherapy unit at Cairo University Hospital over a period of 6 months (April–September 2016) were included. Family history, clinical details, the Vitiligo Global Issues Consensus Conference classification, the Dermatology Life Quality Index, Vitiligo Area and Severity Index, Vitiligo Extent Score, Vitiligo Disease Activity Score and Vellus Score were determined and these measurements were correlated to leukotrichia.
Results: Out of the 101 patients studied, leukotrichia was found in 47 (46.5%) patients, with vellus hair involved in 37 (78.7%), terminal hairs in 30 (63.8%) and both in 20 (42.5%) patients. Vellus hair involvement was significantly higher in generalized bilaterally symmetrical vitiligo than in acrofacial or unclassified vitiligo. The incidence of scalp leukotrichia also was higher in generalized symmetrical vitiligo than in acrofacial vitiligo. The Vellus Score showed significant associations with Vitiligo Area and Severity Index, Vitiligo Extent Score and the Dermatology Life Quality Index.
Limitations: This was a short-term study with a small sample size. Prognostic and therapeutic correlations were not studied; prospective longitudinal studies are needed for further evaluation.
Conclusion: Leukotrichia was found in almost half of the studied sample and its frequency varied among the different types of vitiligo.

Humans have long been preoccupied with hair color and it can have a considerable psychological impact.[1] 'Leukotrichia' means 'white hair',[2] while poliosis is the presence of white or hypopigmented hairs in a group of follicles. Leukotrichia/poliosis results from a reduction or absence of melanin in the hair follicle.[3],[4] The term 'canities' is usually used to indicate progressive loss of hair pigment with age.[5]

Leukotrichia/poliosis is known to occur in a number of genodermatoses as well as diverse acquired disorders.[4],[6] In addition, normal ageing is associated with leukotrichia.[5] Leukotrichia can be classified according to the underlying etiology into genetic and acquired.[4],[6] Alternatively, leukotrichia can be classified based on its extent into localized as in vitiligo, alopecia areata and piebaldism, or generalized as in oculocutaneous albinism.[4]

Vitiligo is a well-known cause of leukotrichia where depigmentation involves the skin as well as body hair, whether vellus or terminal.[7] Leukotrichia may have major psychological effects in vitiligo patients, and is assumed to be of a similar concern as vitiliginous macules, especially in Asians.[2],[8] However, literature on leukotrichia in vitiligo is scanty.

The incidence of leukotrichia has been reported to range from 9 to 48.4% in vitiligo patients,[9] and it is observed in a high percentage (49 to 100%) of segmental vitiligo patients[7],[10] It has been reported to occur even beyond the margin of vitiliginous skin in a number of patients with segmental vitiligo. Further, it can be severe enough to involve all hairs within the vitiliginous area.[11]

Vitiligo was classically known to involve epidermal melanocytes first, before attacking melanocytes of the hair bulb and resulting in leukotrichia.[12] However, follicular vitiligo is a newly described entity in which vitiligo involves the hair follicles before the skin and this process could extend beyond the vitiliginous area.[10]

The pathogenesis of leukotrichia associated with vitiligo is assumed to be the same as that of the vitiligo itself, with identical factors acting on both epidermal melanocytes and those in the hair follicle bulb. Thus, the different theories explaining vitiligo would apply to the associated leukotrichia as well,[2] including the autoimmune hypothesis whereby antibodies are believed to attack the hair bulb melanocytes.[13]

The presence of leukotrichia is generally considered an ominous sign as it indicates depletion of the melanocyte reservoir, and thus, a poorer response to treatment.[7],[14]

The current study was conducted at the outpatient clinic and phototherapy unit of the Dermatology Department, Faculty of Medicine, Cairo University (Kasr Al Ainy Teaching Hospital) over a period of 6 months It was approved by the Dermatology Research Ethical Committee. Informed consent for participation in the study and photography was obtained from each patient (ClinicalTrials.gov registration ID: NCT03402633).

This was an observational cross-sectional study.

All vitiligo patients attending the outpatient clinic at the Kasr Al Ainy Teaching Hospital as well as newly admitted patients at the phototherapy unit were assessed from April 2016 to September 2016. A total of 101 cases were recruited.

Patients included in the study were vitiligo patients with or without leukotrichia >18 years of age. Leukotrichia when seen could be within the vitiliginous areas or on the scalp, usually in bunches of a few hairs, with or without underlying vitiligo. Patients who had received any prior treatment and those with segmental vitiligo were excluded from the study.

Investigation was done by the same dermatologist in the same room. It was done in a special room with good illumination as well as feasibility for complete room blanking to examine the patient with wood's light. Entire skin was examined for each patient and data was entered in a preset proforma.

Data were coded and entered using the Statistical Package for the Social Sciences (SPSS) version 23. Data was summarized using mean, standard deviation, median, minimum and maximum in quantitative data and using frequency (count) and relative frequency (percentage) for categorical data. Comparisons between quantitative variables were done using the non-parametric Kruskal-Wallis and Mann-Whitney tests. For comparing categorical data, Chi square (χ2) test was performed. Exact test was used instead when the expected frequency is less than 5. Correlations between quantitative variables were done using Spearman correlation coefficient. Multivariate linear regression analysis was done to adjust for disease duration in relations with vellus score. Multivariate logistic regression was done to detect relation between leucotrichia and koebnerization after adjustment for disease duration. P values less than 0.05 were considered as statistically significant.

A statistically significant relationship was found between leukotrichia and absence of koebnerization, 39/47 (52.7%) patients with leucotrichia showing absence of koebnerization (P = 0.04). After adjustment for disease duration in a logistic regression model, no significant relation between leukotrichia and koebnerization was detected. Leukotrichia was not correlated to the presence of a halo nevus, disease stability (Vitiligo Disease Activity score) or family history of vitiligo. Disease duration was significantly higher in patients with leukotrichia (145.07 ± 135.67 months) than in those without (68.25 ± 90.00 months) (P < 0.001).

Disease duration and vitiligo disease activity were also not correlated to the Vellus Score (considering vellus hair involvement whether solely or in association with terminal leukotrichia). 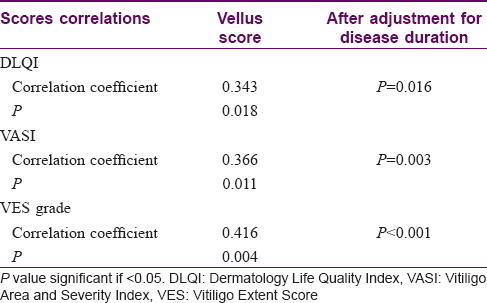 Table 3: Vellus score in relation to DLQI, VASI, VES grade, and after adjustment for disease duration

We succeeded in following up only 12 of the study patients for 3 months with serial photographs. Interestingly, we noted that vellus leukotrichia repigmented in one patient in response to topical tacrolimus 0.03% applied daily for 3 months which was quite unexpected. In another patient, repigmentation of some of the affected vellus hairs occurred with improvement of associated vitiligo in response to 12 weeks (36 sessions) of treatment with narrowband ultraviolet B 311 nm. This phenomenon needs further assessment.

Leukotrichia has always been considered a predictor of poor outcome in vitiligo patients.[7],[14],[23] One study linked the presence of leukotrichia and halo nevi at disease onset to the risk of progression from segmental vitiligo to mixed vitiligo.[16]

In 2014, Holla et al. suggested that vitiligo patients with leukotrichia are left with surgical management as the only hope.[2] However, few studies have focused on the clinical aspects of leukotrichia.

Vellus hair involvement when associated with terminal hair involvement is likely to be associated with more extensive disease and thus a higher psychological burden, as is clear from the higher Dermatology Life Quality Index values with higher Vellus Scores in our study. Moreover, we can assume that generalized bilaterally symmetrical vitiligo and vitiligo universalis, being the most extensive types of vitiligo, are more likely to develop vellus hair leukotrichia and scalp leukotrichia, a point that might aid in assessing the prognosis of these patients.

Leukotrichia was higher in patients without Koebner's phenomenon and it did not correlate with the Vitiligo Disease Activity Score in our study. Thus, leukotrichia is more likely to be observed in stable disease (Koebner's phenomenon absent) which may have followed a period of initial rapid progression. On the other hand, the Vitiligo Disease Activity Score depends on patients' perception and memory, perhaps explaining why this score did not correlate with the incidence of leukotrichia viz., 'stable disease' may not always fit into the definition of 1 year of stability. Further delineation in the context of leukotrichia is needed.

The study gives new insights into leukotrichia in non-segmental vitiligo. We conclude that leukotrichia, whether vellus or terminal, is likely to differ among the different types of vitiligo and was higher in patients without Koebner's phenomenon. In addition, scalp leukotrichia is assumed to increase the psychological burden in vitiligo patients.

Future research is certainly needed to evaluate the phenomena of repigmentation in leukotrichic hair and melanocyte proliferation, as well as the migration markers involved. Further studies also need to look at the relationship between disease stability and leukotrichia and to confirm the hypothesis that vitiligo with leukotrichia marks aggressive disease with rapid progression and early stabilization, thus justifying the belief that surgical treatment may be the most suitable option in such patients.

This was a short-term study with only a small number of patients. Another limitation was that prognostic and therapeutic correlations were not assessed; these would need a prospective longitudinal study.

The authors certify that they have obtained all appropriate patient consent forms. In the form, the patients have given their consent for their images and other clinical information to be reported in the journal. The patients understand that their names and initials will not be published and due efforts will be made to conceal identity, but anonymity cannot be guaranteed.