Nicotinamide: Mechanism of action and indications in dermatology

Nicotinamide aka Vitamin B3 (niacinamide, nicotinic acid amide) is the pyridine 3 carboxylic acid amide form of niacin [Figure - 1]. It is a water-soluble vitamin that is not stored in the body. The main source of vitamin in diet is in the form of nicotinamide, nicotinic acid, and tryptophan.[1] The main source of niacin include meat, liver, green leafy vegetables, wheat, oat, palm kernel oil, legumes, yeast, mushrooms, nuts, milk, fish, tea, and coffee.[2],[3] The recommended daily dose of vitamin B3 in niacin equivalent is given in [Table - 1].[4] 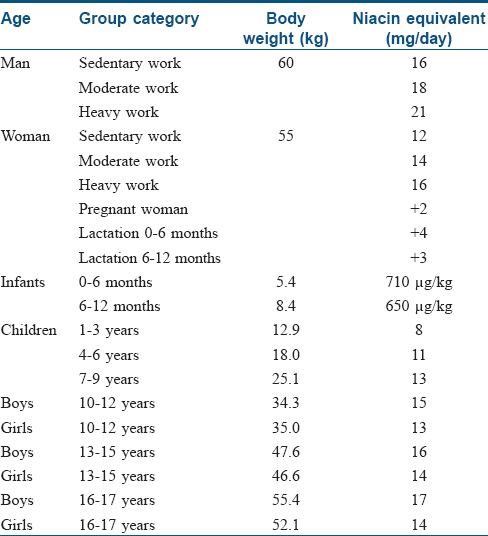 Nicotinamide is mainly involved in the cellular energy metabolism, DNA repair, and in regulation of transcription process. The various biological effects along with the underlying mechanism of action are tabulated [Table - 2].[2],[3],[6],[7],[8],[9],[10] 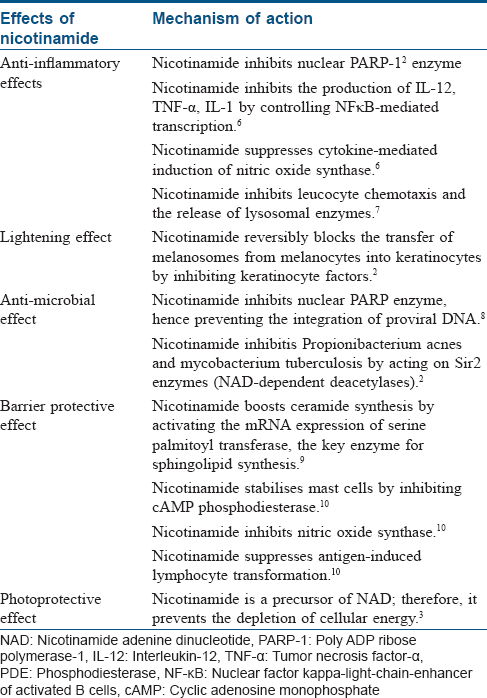 Uses of Nicotinamide in Dermatological Disorders

The anti-inflammatory and sebostatic role of nicotinamide plays a role in its use as an antiacne topical formulation.[11] Propionobacterium acnes colonization induces IL-8 production in acne lesions. IL-8 is a chemokine that has mitogenic activity in keratinocytes and is also involved in neutrophil chemotaxis.[3] In acne lesions, there is also activation of transcription factors NF-κB (nuclear factor kappa-light-chain-enhancer of activated B cells) and activator protein 1 (AP-1), which is inhibited by nicotinamide through enzyme poly ADP ribose polymerase-1 (PARP-1) inhibition.[3] In a randomized double-blinded, controlled trial, 160 patients with moderate and predominantly inflammatory acne were given 4% nicotinamide gel or 4% erythromycin gel twice daily for 8 weeks. Both the groups reported similar regression of inflammatory lesions but the group treated with 4% nicotinamide gel had significantly greater improvement in seborrhoea scores.[12] Another double-blinded, placebo-controlled, randomized trial with 130 patients found that a 2% nicotinamide moisturiser significantly reduced sebum excretion rates when compared to a placebo moisturiser.[3] Shalita et al.[13] found reduction of inflammatory papules in 82% of those treated with 4% nicotinamide after 8 weeks of treatment. Dos et al.[14] reported that clindamycin phosphate 1% and nicotinamide gel 4% are equally and highly effective in the treatment of moderate acne either alone or in combination.

Role of nicotinamide in atopic dermatitis

Nicotinamide containing moisturisers have been shown to be effective in treatment of atopic dermatitis. In atopic dermatitis, there is a decrease in ceramides, increase in transepidermal water loss (TEWL) and impaired skin barrier. An in vitro study showed that nicotinamide caused 2–3 fold increase in free fatty acids and 1.5-fold increase in cholesterol.[9] In atopic dermatitis, there is an upregulation of aquaporin 3 that encodes water permeable channels resulting in increased water loss, which is prevented by nicotinamide.[3] In a study on 28 patients of atopic dermatitis, nicotinamide fared better than white petrolatum in decreasing TEWL.[3] In a right left comparative study in 12 male patients with dry skin, nicotinamide 2% application twice weekly for four weeks reduced TEWL by 27% in comparison to vehicle and increased stratum corneum free fatty acids and ceramides by 67% and 34%, respectively.[9] Another randomized controlled trial was done on 292 participants who received nicotinamide 500 mg twice daily or placebo for 12 months. The results showed consistent reduction in TEWL by 6–7% compared to placebo on the face and limbs.[15]

Nicotinamide also increases the production of the epidermal proteins keratin, filaggrin, and involucrin.[17] The glycation between protein and sugar resulting in formation of cross linked products gives a yellow colour to the skin. As nicotinamide is a precursor of antioxidant NADPH, it has antiglycation effects, thus preventing sallowing of skin.[16] In a double-blinded, split face, randomized controlled trial, 5% nicotinamide cream was compared to “vehicle only cosmetic” in 30 Japanese women on face for 8 weeks. There was a significant decrease in wrinkles and skin roughness with nicotinamide.[16]

As nicotinamide inhibits melanosome transfer from melanocytes to keratinocytes, it is used as a lightening agent. A double-blinded, randomized controlled trial with 202 patients found that a topical formulation containing 2% N-acetyl glucosamine and 4% nicotinamide significantly reduced the detectable area of facial spots and the appearance of pigmentation compared to vehicle formulation.[18]

Anticarcinogenic and photoprotective effect of nicotinamide

The enzyme PARP-1, which is inhibited by nicotinamide, is involved in cell senescence, ageing, and cancer. The excessive activation of PARP-1 by UV rays result in depletion of cellular NAD, which further cause glycolytic failure leading to cell necrosis.[21] Nicotinamide replenishes cellular energy as it is a precursor of NAD and NADP. Secondly, it prevents overactivation of PARP-1 by negative feedback, thus preventing cell senescence. Besides, nicotinamide protects against UVA and UVB induced immunosuppression. In a phase 3 clinical trial, the administration of nicotinamide 500 mg twice daily led to a statistically significant reduction in the number of cases of non melanoma skin cancers and actinic keratosis though the effect disappeared 6 months after stopping nicotinamide.[22] This is an area of further research but nicotinamide might prove beneficial in prevention of skin cancers.

Nicotinamide has been named PP factor or Vitamin PP due to its role in treating pellagra and was first used clinically in 1937.[8] Pellagra is characterized by triad of diarrhoea, dermatitis, and dementia. Pellagra is caused because of cellular deficiency of niacin, resulting from an inadequate dietary supply of niacin and tryptophan mostly seen in chronic alcoholics, and in patients with gastrointestinal diseases or severe psychiatric disturbances.[23] Rare causes are functioning carcinoid tumors and Hartnup disease, therapy with isoniazid, 6-mercaptopurine, or 5-fluorouracil.[24] The cutaneous changes include erythema and scaling on sun exposed areas with a “butterfly” eruption on face and a well-marginated eruption on the front of the neck (“Casal's necklace”).[24] Oral nicotinamide is given initially as 100–300 mg daily in 3–4 doses until improvement in acute symptoms, then slowly tapered to 50 mg BD or TDS.[23] Oral nicotinamide is preferred over niacin/nicotinic acid as it does not precipitate flushing, itching and burning commonly seen with ingestion of niacin in large doses.[24]

In a randomized controlled trial, the combination of topical calcipotriene and nicotinamide was more effective than either of the two as monotherapy as a steroid sparing topical treatment. The addition of nicotinamide as an adjuvant to calcipotriene can enhance the efficacy of calcipotriene when used for topical psoriasis treatment.[26]

Nicotinamide is a safe and inexpensive compound with negligible side effects. It is well tolerated even in doses of 1 g/day to 3 g/day.[3] There are no reports of teratogenicity with nicotinamide. Minor side effects include nausea, vomiting, headache, fatigue. It does not cause vasodilatory side effects like flushing, alteration in blood pressure, body temperature or pulse as seen with niacin.[3] In topical formulation, it does not cause skin irritation, photosensitization in concentrations of 0.0001% to 4%.[3]

The existing clinical data and literature on nicotinamide suggests that it is an inexpensive, safe drug with beneficial effects as an adjunct in many dermatological diseases because of its anti-inflammatory, anti-oxidant, barrier repair and protective effects. It can be used both as a topical and oral drug without any major adverse effects.