No association between seropositivity for Hepatitis C virus and lichen planus: A case control study

Background: The epidemiological association of lichen planus (LP) with hepatitis C virus (HCV) infection has been recorded from some countries and HCV RNA3 has been isolated from lesional skin in patients with LP and chronic HCV infection. The observed geographical differences regarding HCV infection and LP could be immuno-genetically related. Aim: To determine whether HCV has a causal relationship with LP. Methods: Histopathologically proved cases of LP were subjected to antibody to HCV test by the Third Generation Enzyme Immunoassay Kit for the detection of antibody to HCV (Anti-HCV) in human serum or plasma. They were routinely screened in the virology department by the reagent kit, HIVASE 1 + 2, adopting the "direct sandwich principle" for the assay to detect antibodies to HIV-1 and/or HIV-2. There were 150 age and sex matched controls (not suffering from LP) and HIV-I and II negative, and negative for HCV. Results: Of the 104 patients studied only 2 patients (1.92%) of generalized LP with disease duration of more than 3 months were found to be positive for antibodies to HCV. This was not a significant finding and no statistical methods, e.g. Chi square test etc. could be applied. Conclusion: Hepatitis C virus is not significant to the causation of LP in India.
Keywords: Lichen planus, Hepatitis C Virus 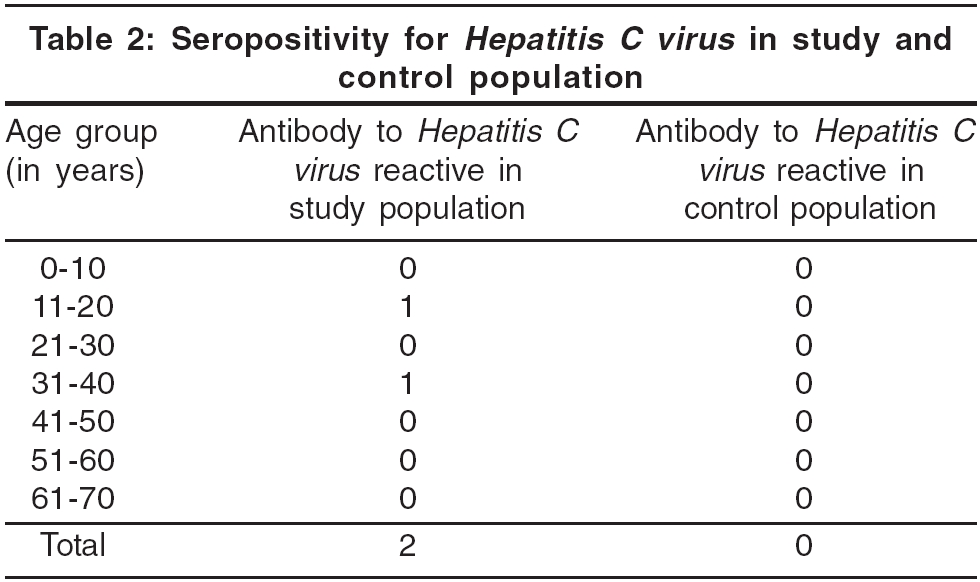 Lichen planus (LP) is thought to be an immunologically mediated disorder. In LP lesions, there is infiltration in the dermis of T cells, both CD4+ and CD8+, while CD8+ T cells infiltrate the epidermis. The CD8+ cytotoxic T cells recognize an unknown antigen associated with major histocompatibility complex (MHC) class I on lesional keratinocytes and lyse them.[1],[2] A genetic susceptibility to idiopathic LP has been proposed. A familial incidence of 10.7% was quoted in one study.[3]

An epidemiological association of LP with hepatitis C virus (HCV) infection has been recorded, especially in patients from Italy, where immunogenetic factors such as HLA-DR6 allele may account for geographical differences with regard to HCV infections and LP, and from certain parts of France, Italy, Spain, Japan and Pakistan.[4],[5] Some workers have isolated HCV RNA from lesional skin in patients with LP and chronic HCV infection[6],[7] and an HCV related product has been postulated as a possible antigen in LP. However, patients from northern Europe (including the UK), USA and Nepal have shown no association between LP and HCV infection.[8],[9],[10],[11] We conducted this study to determine whether HCV has a causal relationship with LP in Indian patients.

This study was conducted in the Department of Dermatology and Leprology of the School of Tropical Medicine, Kolkata, from patients attending our hospital. The hospital caters to many patients from the eastern parts of India, and from Nepal and Bangladesh. Patients clinically diagnosed as LP between May 2004 and May 2005 were biopsied. All biopsy proven cases of LP were screened for HIV-1 and 2 because HIV infection may interfere with interpretation of HCV seropositivity. However, none were detected seropositive. The HIV-seronegative patients were tested for antibody to HCV by the reagent kit, SP-NANBASE C-96 3.0, developed by the General Biologicals Corporation, Taiwan ROC which adopts the second antibody "sandwich principle" as the basis for the assay to detect antibodies to HCV. This third generation anti-HCV diagnostic kit features structural and non-structural antigens specific for HCV.

The results were analyzed and compared with those of 150 HIV-seronegative controls selected from the out-patient department not suffering from LP and who were ready to participate in the study. These controls were more or less matched for age and sex [Table - 1].

We tested 104 patients of biopsy proven LP who were HIV-seronegative for antibody to HCV. Only two patients suffering from generalized LP of more than 3 months′ duration were anti-HCV antibody positive. The background rate of seroprevalence of HCV as per unpublished data of our virology department is 0.8%. All 150 controls of comparative age and sex groups tested negative for anti-HCV antibody.

We did not find any significant association between LP and HCV. In fact, the number of HCV positive patients was so low that we could not apply any statistical methods. Our results are comparable with other Indian studies[14],[15],[16] where only 2.66% cases were positive for the HCV antibody, which is almost parallel to the prevalence of HCV in the general population in India (1.5 to 2.2%).[3] However, while studies conducted in New Delhi have failed to demonstrate statistically significant association between HCV and LP,[17] studies conducted in Hyderabad and Bangalore have shown a significant association.[4],[5] Whether the geographical variation of Hep C seropositivity prevalence among LP patients may be attributed to genetic factors remains to be studied.

All the previously done studies including the present study suffer from the shortcoming of inadequate sample size. Future studies should be large enough to take into account this requirement and settle this issue.