Oatmeal in dermatology: A brief review

The purpose of this review is to gather and summarize in vitro, in vivo, and clinical trials on oatmeal preparations and their uses in dermatology. Literature searches have been carried out to collect in vivo and in vitro studies as well as clinical trials on this subject. The results suggest that oatmeal possesses antioxidant and anti-inflammatory properties and its administration is effective on a variety of dermatologic inflammatory diseases such as pruritus, atopic dermatitis, acneiform eruptions, and viral infections. Additionally, oatmeal plays a role in cosmetics preparations and skin protection against ultraviolet rays. Although some promising results citing the use of oatmeal to treat numerous dermatologic conditions have been found, the complete efficacy of oatmeal has not been sufficiently explored. This paper proposes accurate and useful information concerning the use of oatmeal in clinical practice to dermatologists.
Keywords: Dermatology, oatmeal, colloidal oatmeal, review

Oat (Avena sativa) is unique among the cereals for its multifunctional characteristics and nutritional profile. Recent developments in food and nutrition have shown the importance of its various components. Oat bran especially, is a good source of B complex vitamins, vitamin E, protein, fat, and minerals. Additionally, it is rich in beta-glucan which is heart healthy soluble fiber in particular. [1],[2],[3]

Oatmeal is a natural product which has an excellent safety record and a long history in the treatment of dermatologic disorders. Oatmeal possesses antioxidant and anti-inflammatory properties. Colloidal oatmeal produced by finely grinding the oat and boiling it to extract the colloidal material and became available in 1945. It is noteworthy that many clinical properties of colloidal oatmeal result from its chemical polymorphism. [2],[4]

Oatmeal possesses different types of phenols which exert the antioxidant and anti-inflammatory activity. Avenanthramides are phenolic compounds present in oats at approximately 300 parts per million (ppm) and exhibit antioxidant activity in various cell types. They are responsible for the potent anti-inflammatory effect of oatmeal that appears to mediate the anti-irritant effects of oats. [2] The composition of colloidal oatmeal consists mainly of starch (65%-85%), proteins (15%-20%), lipids (3%-11%), fiber (5%), and beta-glucans (5%). [4]

Oatmeal bath remedy is formulated with 100% natural colloidal oatmeal. About 10 CC of oatmeal should be sprinkle directly under the faucet into the running water. The approximate time to soak in oatmeal bath is 15-20 min. The oatmeal bath gently cleans and soothes sensitive skin and, therefore, soap is not necessary. [5]

It has been demonstrated that oatmeal extract decrease arachidonic acid, cytosolic phospholipase A2 and tumor necrosis factor-alpha (TNF-alpha). [6] Additionally, oatmeal extract can inhibit the activity of nuclear factor kappa B (NF-kappa B) in keratinocytes and the release of proinflammatory cytokines and histamine, which are well known key mechanisms in the pathophysiology of inflammatory dermatoses. Interestingly, it has been shown that avenanthramides inhibit TNF-alpha induced NF-kappa B luciferase activity and diminish secretion of the proinflammatory cytokine interleukin-8 (IL-8). [7] Also oatmeal extract oligomer, significantly mitigate the mean surface of dilated vessels and edema in comparison with vasoactive intestinal peptide (VIP) treated skin. [8] 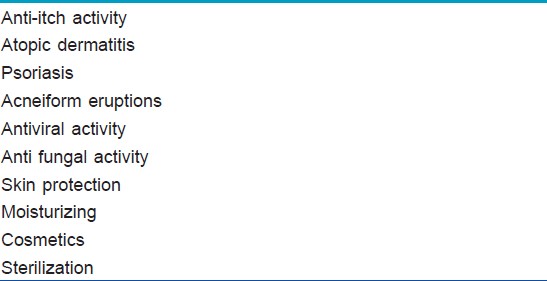 Oatmeal has been used for centuries to decrease itching in a variety of xerotic dermatoses. [7] It has been illustrated that avenanthramides reduce oxazolone-induced contact hypersensitivity, resiniferatoxin-induced neurogenic inflammation, and compound 48/80-induced, histamine-mediated itch. Another in vitro study has shown that avenanthramides caused a considerable reduction in histamine release from mast cells stimulated by substance P. [4] Matheson and colleagues evaluated the efficacy of liquid paraffin with 5% colloidal oatmeal in comparison with other contained liquid paraffin in the management of patients with burn injuries. They reported that product contains liquid paraffin with 5% colloidal oatmeal significantly decreased itching and patients requested significantly less antihistamine. [9]

Colloidal grain suspensions of oatmeal are considered as adjuncts in atopic dermatitis therapy, especially in the United States. On the other hand, many young children have been treated by colloidal grains in Italy. [8] Studies have demonstrated that topical formulation of natural colloidal oatmeal, particularly avenanthramide, alleviates symptoms by restoring the cutaneous barrier. Additionally, it may play a crucial role in decreasing the use of corticosteroids and calcineurin inhibitors in atopic dermatitis. [4],[10],[11]

In a double-blinded, randomized patch study, Pigatto and colleagues showed that topical colloidal grains could be used as an adjunct in the management of mild atopic dermatitis in children under 2 years of age. Furthermore, no sensitivity to topical colloidal grains reported in the patients. [10] In contrary, another study demonstrated that oat sensitization for allergy testing is higher than expected in atopic dermatitis children. It is possibly due to repeated applications of cosmetics with oats on an impaired epidermal barrier. [12]

Psoriasis is a chronic, recurring inflammatory disease that affects 1%-3% of the population worldwide. Psoriasis is considered a psychosocial and medically debilitating disorder. [13],[14] It is hypothesized that colloidal oatmeal can be effective in the treatment of psoriasis due to its anti-inflammatory properties. [1],[15]

It has been illustrated that treatment with colloidal oatmeal lotion is efficient in controlling the acneiform eruptions associated with epidermal growth factor receptor (EGFR) inhibitor drugs such as cetuximab, erlotinib, panitumumab, sorafenib, and multiple tyrosine-kinase inhibitors. As such, it increases patients′ compliance with antineoplastic therapy. [16]

It has been found that avenanthramides show antigenotoxic activities that are comparable to those of ascorbic acid, which have the potential to exert beneficial physiological effects. [17]

The dramatic antiviral properties of oatmeal extract is likely due to inhibitory effects on eicosanoid formation, expression of cytosolic phospholipase A2 (PLA2), and arachidonic acid mobilization in human keratinocytes. [18] In an open trial study conducted by, Safa et al, patients with molluscum contagiosum were treated successfully with a zinc oxide cream containing colloidal oatmeal. [19]

Oat seed extracts show a high degree of antifungal activity and can be applied directly on rye bread to prevent the formation of P. roqueforti colonies. [20]

Ultraviolet A (UVA) in the range of 320-370 nm is absorbed by flavonoids in oats. The use of colloidal oatmeal as a skin protectant is regulated by the U.S. Food and Drug Administration (FDA) according to the Over-The-Counter Final Monograph for Skin Protectant Drug Products issued in June 2003. [2]

Today, colloidal oatmeal is available in the form of moisturizing creams. The high concentration of starches and beta-glucans in oat are responsible for its protective and water-holding functions. The hydration of the skin is one of the most important agents involved in preserving the integrity of the stratum corneum barrier. Oatmeal is a good option for moisturizing of dry or sensitive skin. [2]

Avenacins are other phenolic esters in oat which structurally belonging to saponins. A large lipophilic region and a short chain of sugar residues, which interact with nonlipid components is characteristic of avenacins. Saponins have a soap-like action for this structure. Accordingly; saponins are mostly responsible for the cleansing activity of oat. A variety of functional properties make colloidal oatmeal as a cleanser, buffer, as well as a soothing agent. Additionally, colloidal oatmeal can be used in shampoos and shaving gels. [2],[21]

Anecdotal reports have demonstrated that colloidal oatmeal can play a role as a dusting powder in the sterilization of surgical gloves [22] [Table - 1].

Oatmeal has been documented to decrease serum low-density lipoprotein cholesterol (LDL) and coronary heart disease as an anti-atherosclerotic agent. [23],[24] It is also considered a remedy for diabetes with reduction of insulin dosage [25] as well as the treatment of inflammatory bowel disease. [26] Nuclear factor-kappa B (NF-kappa B), a key regulator of inflammation, has been identified as an essential modulator in cases where inflammation could develop into cancer. It has been shown that avenanthramides are responsible for anticancer activity, partially through the inhibition of NF-kappa B activation. [27]