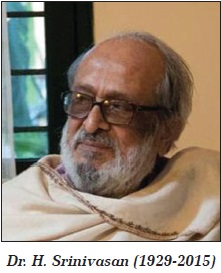 Dr. H. Srinivasan, world-renowned reconstructive surgeon and leprologist, passed away on December 21, 2015. He died due to complications of end-stage renal disease and chronic obstructive pulmonary disease at Chennai. With his demise, the world of leprosy has lost an authority on leprosy rehabilitation and nerve damage.

Dr. Hariharan Srinivasan was born on September 7, 1929, in the then Madras presidency of British India. He studied medicine at Madras Medical College, Chennai and later went to the UK and did double FRCS. He worked in the UK in various capacities before returning to India.

Dr. Srinivasan′s contributions to the field of leprosy as leprologist, reconstructive leprosy surgeon, researcher and mentor are of immense value and span several decades. He authored/co-authored numerous studies on nerve damage, surgical procedures and disability. Citations in PubMed of his published articles date back to 1966. He identified and reported "Quiet Nerve Paralysis" and the benefits of steroid therapy for it in his most widely cited paper published in Leprosy in India (previous name for Indian J Lepr) in 1982.

He developed innovative techniques in reconstructive surgery and conducted workshops in medical colleges and other institutes. He used his orthopedic and reconstructive skills for the benefit of poor leprosy patients in India, Brazil and other countries. For decades, he shared his knowledge and experience of leprosy reconstructive surgery with a number of plastic and orthopedic surgeons under World Health Organization-sponsored programs. He furthered the cause of leprosy in India as the director of Central JALMA Institute for Leprosy, Agra, and as the director of Central Leprosy Teaching and Research Institute, Chengalpattu. He was editor of the prestigious Indian Journal of Leprosy from January 1990 to June 2001. After the age of 60, he worked largely doing free reconstructive surgeries, traveling around the world.

Dr. Srinivasan was a recipient of the "Padma Shri," a prestigious civilian award given by the Government of India in 1984 for his "distinguished contribution in the sphere of medicine." He also received Doctor of Science (Honoris Causa) from Medical University of Tamil Nadu (2004), International Gandhi Award (2007) and Pioneer of Hand Surgery (2007) by the International Federation of Societies for Surgery of Hand.

He contributed to the knowledge of leprosy by authoring important books including "Corrective surgical procedures commonly used in leprosy" and the World Health Organization publication, "Prevention of disabilities in patients with leprosy." He contributed chapters on leprosy to various textbooks including the "IADVL Textbook of Dermatology."

Apart from being a leprosy reconstructive surgeon, Dr. Srinivasan was a philosopher and a prolific writer in Tamil, his native language. According to people close to him, he described himself as a pure scientist and a skeptic agnostic. He wrote under five pseudonyms in Tamil. His stories and novelettes are about the vagaries of common life and the philosophy behind living a life in peace with oneself. He was also a contributing editor of a finely compiled 1328-page Tamil-English dictionary.

Two daughters survive him. His elder daughter Dr. Lata is a fetal pathologist and is married to Dr. Murlidhar Rajagopalan, a dermatologist, and they live in Chennai. The younger daughter, Ms. Bharati is a special educator in Bengaluru.

Dr. Srinivasan leaves a legacy of surgical reconstruction and rehabilitation techniques to the world of leprosy. May his soul rest in peace.