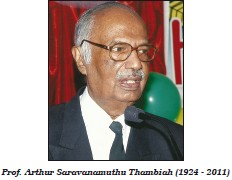 Prof. Arthur Saravanamuthu Thambiah (born on 2 nd January 1924, died on 11 th May, 2011) was the doyen of Dermatology in our state Tamil Nadu and even in the country, as he was one of the first doctors with a registrable postgraduate qualification in Dermatology from St Johns Hospital for Skin Diseases, London, in those days, when such a specialty never existed in our country. He achieved this at a remarkably early age of 27 years.

Born to doctor parents, Dr. S Thambiah (Senior) and Dr. Lilly Thambiah, both of them eminent in their respective fields, young Thambiah proved his brilliance by bagging many gold medals during his undergraduate days at the Madras Medical College. He was the Company Sergeant Major in the University Officer′s Training Corps. He took active part in the freedom struggle in the 1940s.

After he joined the Madras Medical Service, in 1951, he was sent as a Colombo plan scholar to the St. John′s Institute of Dermatology, London, which was then the Mecca for Dermatology. During this period, he was appointed as the Registrar of the Histopathology Department of the Institute, the first Indian to be given that honor.

Being the first qualified dermatologist, he became the first Professor of Dermatology, at the Madras Medical College, where he conceived and gave birth to the Department of Dermatology - one of the oldest in the country. He was the architect of structured training in Dermatology, in the form of a postgraduate diploma and degree courses. Dermatology became a much sought after specialty, on account of the sheer efforts and a flair for teaching of Prof. AST (Arthur Saravanamuthu Thambiah) as he is fondly remembered by his students, who now occupy the highest posts in Dermatology in the state, and are also scattered throughout the country and even abroad.

He was an excellent clinician, therapeutician, and a great humanitarian. The private practice that he set up after his retirement was by and large a charity. His clinic on Poonamallee High Road used to be flooded with patients seeking his consultation and they waited patiently for hours together. Many governors and VIPs were among those he had treated with simple everlasting remedies, in his long and illustrious career.

He had more than 200 publications in Indian and foreign journals and his articles, most of them original, were cited extensively. He was the first to observe many rare skin diseases in Asia. He encouraged his students to continue his work and cherished their success like a mother would. He had Fellowships from the Royal College of Physicians of Edinburgh, and the Indian Academy of Medical Sciences. The prestigious B.C. Roy award was bestowed upon him for being an eminent teacher; an equally prestigious gold medal was given to him by the Royal College of Physicians of Edinburgh for the services that he rendered to the college. He had the distinction of being one of the few medical doctors to receive honorary doctorates both from the University of Madras and the Tamil Nadu Dr. MGR Medical University.

He was held in very high esteem by his contemporaries in India and abroad. A student of his could gain a hearty welcome in any part of the world just by revealing the identity of Prof. AST. He was actively involved in the Tamil Nadu state branch of the Indian Medical Association as the President and he presided over many of their meetings.

He had a prodigious memory and could remember the exact chair which he occupied in the second standard at the Ewart school. He could tell the names of all the students he trained long after he retired. He could recite many parts of the Bible, and the Psalms of David were his favorite. He had a wide knowledge of the two world wars and the British history. His heroes were Field Marshal Montgomery, Rommel, and Napolean.

His absolute dedication to his chosen specialty was a by-word in medical circles. He was the first to reach the hospital and the last to leave the premises. He was dutiful from dawn to dusk and hardly witnessed sunrise or sunset, while he served at the Madras Medical College. He was a true bachelor and tried to convince his postgraduates that by staying single they could achieve more in life. He had very few takers on this!

Thus, here was a man of absolute integrity and probity, a man dedicated to the art of medicine, and a man of God. We very rarely come across such people in life. He was a pioneer in the field of Dermatology and a man of many facets.

What epitaph do you write for pioneers? They are different from others. We have lived with a legend in many ways, and this was a great privilege!