Background : Dyeing is an age-old process and forms an integral part of textile industries. Tying is a process by which a particular part of cloth is prevented from the process of dyeing. The skin diseases in workers engaged in the 'tie and dye' industry have not been extensively studied. Aims : To study the prevalence of contact dermatitis among workers engaged in the 'tie and dye' industries in and around Jodhpur (Western Rajasthan). Methods : One thousand three hundred workers engaged in 'tie and dye' work were evaluated for occupation-related dermatitis. Those with skin lesions were subjected to patch tests using 2% aqueous solution of the dyes and chemicals commonly used by them. These included direct dyes, VAT dyes, sulfur dyes and azo dyes. Fifty workers without skin lesions served as controls. Results : One hundred patients (7.69%) had dermatitis involving the exposed sites, mainly the hands and forearms. Eighty-one patients showed positive reactions to one or more dyes, most commonly Red RC base (azo dye), followed by naphthol. Conclusion: Red RC base and naphthol were the commonest allergens in the 'tie and dye' industry. 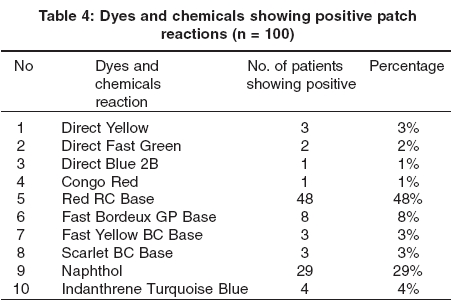 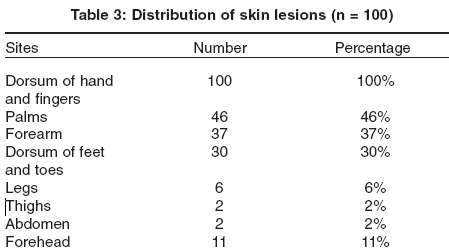 Due to progressive industrialization, workers are exposed to an increasing number of chemicals and occupational hazards. Occupational dermatoses account for a large number of occupational diseases and could even exceed all other industrial diseases put together.[1] Other organs such as the eyes, lungs, liver and urinary bladder may also be involved.[2] The common factors that predispose to the development of contact dermatitis are existing dermatoses, pressure, friction, sweating and prolonged immersion in water.[3] Genetic influences also play an important role.[4] In India, there are few reports of occupational dermatitis in industrial workers. [5],[6],[7],

Tying and dyeing is a manual procedure that directly exposes workers to various dyes and chemicals used for bleaching, printing and finishing. Skin diseases, such as allergic contact dermatitis, irritant dermatitis and inflammation of mucous membranes, result from contact with dyes and chemicals, particularly acids, alkalies, oxidizing and reducing agents, detergents and solvents. In this study, we report on the prevalence of contact dermatitis among workers in the ′tie and dye′ industries in Western Rajasthan.

The study was conducted among the workers engaged in ′tie and dye′ industries in and around Jodhpur. The subjects comprised 1300 workers, 1000 engaged in 200 cottage industries and 300 in 15 textile industries. Each worker was questioned in detail to find the exact nature of the job, the chemicals and dyes to which the worker was exposed, whether protective clothing and barrier creams were used, and previous occupations (if any).

Workers with skin lesions on the hands and exposed areas were further evaluated. The duration of their lesions, the mode of onset, morphology, other involved sites, complaints, aggravating and relieving factors, and details of past treatment were noted in a proforma. All of them were subjected to a battery of patch tests using the dyes and chemicals commonly used by ′tie and dye′ industry workers. The patch test antigens included direct dyes, VAT dyes, sulfur dyes and azo dyes. A 2% aqueous suspension was prepared as per the guidelines of Adam.[8] Fifty workers without skin lesions were also subjected to patch testing and served as controls. Patches were applied on the back, their number, ranging from 12 to 15, determined by the number of chemicals to which the worker was exposed. They were removed after 48 hours and read after 20-60 minutes. The results were interpreted as per the International Contact Dermatitis Research Group recommendations.[9] All patients were strictly instructed to stop any treatment and refrain from work for at least 2 weeks prior to the patch testing.

Generally, all the family members participated in the ′tie and dye′ work. The work was done manually in the courtyard of small residential houses, with poor ventilation, light and working conditions. Wood was used as a fuel. The solution for dyeing was prepared in one corner of the house and washing and rinsing was done in another. The drainage system was open and inadequate. Clothes were dried in the open space in front of the house. Only the workers who prepared the dye solution were using rubber gloves and only a few used goggles. Tying and wrapping was done in rooms or in the verandah.

In the textile industries, the working conditions were relatively better, with adequate lighting and ventilation and a separate room for heating the dye solution. Washing and rinsing was done in water tanks, and the clothes were dried in an open space. Tying and wrapping was done in well-ventilated and well-lit rooms. However, all the work was done manually. The workers frequently used rubber gloves and goggles. After work, soap was used to wash the hands and sweet oil was frequently applied as a soothing agent.

Skin lesions were seen in 100 (7.69%) workers, 77 males and 23 females, most in the age group of 21-40 years [Table - 1]. Their lesions developed insidiously, in the majority after a mean of 5 years of occupational exposure [Table - 2]. Workers carrying out all the four jobs - tying, dyeing, rinsing and drying - were more prone to develop skin lesions (60%), followed,in decreasing order, by those engaged in dyeing (25%), tying (10%), drying (3%) and rinsing (2%). Their commonest complaints were itching (100%), discoloration of the skin (40%), burning (30%), pain (38%), and conjunctival and nasal irritation (10%). Papulo-vesiculation was the chief morphological pattern of the lesions, seen in 66% of patients, followed by lichenification (28%) and papular lesions (6%). All patients had involvement of the dorsum of the hands [Figure - 1], but other sites were also involved [Table - 3].

On patch testing, 81 patients (81%) had a positive reaction [Figure - 2] to one or more chemicals, generally the azo dyes Red RC base (48%) and naphthol (29%) [Table - 4]. Nineteen (19%) were allergic to multiple dyes, most commonly Red RC base and naphthol (10%) [Table 5]. The 19 patients who did not have positive patch test reactions were considered to have cumulative irritant dermatitis.

Of the 1300 workers studied, 1000 (76.92%) were working in the premises of their cottages/houses with inadequate space, light and ventilation and only 300 (23.07%) were serving in 15 bigger textile industries under relatively better working conditions. Most of the work was carried out manually, without proper protection of the exposed parts. Knowledge of barrier creams and other devices was poorer amongst the cottage workers as compared to the textile workers. Males outnumbered females. The majority of the patients were in the age group of 31-40 years.

One hundred workers (7.69%) showed skin lesions associated with their occupation. The nature of the job had a significant bearing on the prevalence of skin lesions. The dermatitis showed significant clearing on temporary discontinuation of work and relapse on resuming the work. Patients who were exposed to all four types of jobs and dyeing were more affected (60% and 25% respectively) than those involved in only tying and wrapping, where factors like perspiration, physical trauma, heat and humidity were relatively less operative. All the cases had an insidious mode of onset.

There have been only a few studies on dermatitis among workers engaged in the dye industries. In one study, Singh[6] found benzathrone to be the main allergen causing dermatitis. Mathur[7] described 49 cases of contact dermatitis among 250 workers in a cottage dyeing industry in Jaipur (Rajasthan). The dermatoses chiefly affected the hands and the forearms. Fourteen developed a positive patch reaction to various dyes. Red RL salt produced positive reactions in all the patients.

In our study, 7.69% workers showed occupation-related dermatitis. Patch test to various dyes gave positive results in 81 patients. The other 19 patients were thought to have cumulative insult dermatitis. Red RC base and naphthol were the commonest allergens found in our study.