Background: Following a drug eruption, patients and their doctors need to know which drugs can be safely administered for subsequent illnesses. Currently available laboratory tests are unable to answer this question in a clinically meaningful manner. Aims: To describe our use of oral provocation tests to provide a list of safe drugs to patients. Methods: We studied the records of 100 patients who underwent oral provocation testing in our department between 2003 and 2009. All patients were admitted to hospital and drugs were administered under supervision, one drug per day. A dermatologist evaluated all symptoms and signs that developed following drug intake. Results: Sixty nine women and 31 men underwent provocation testing. There were 96 reactions in 61 patients, of which 44 reactions in 34 patients were judged to be true reactions. All reactions could be controlled, with treatment or spontaneously. A list of safe drugs was provided to the patient along with written instructions to avoid any drug(s) that had produced a reaction. Conclusions: Oral provocation tests are safe and effective in providing patients with a list of drugs they can take safely. These tests should preferably be undertaken after admitting the patient to hospital.
Keywords: Adverse drug reactions, drug safety, oral challenge tests, provocation tests

The priority in patients who develop drug reactions is to get them well. Once the eruption has subsided, advice must be given on which drugs are safe and which ones to avoid. This is relatively straightforward when a single drug was taken prior to the eruption. It is more complicated when multiple drugs were administered or if the patient does not know which drugs she has taken. Stopping or substituting all the drugs that were being taken often leads to sub-optimal and expensive regimens e.g., in patients receiving anti-tubercular drugs, combination anticonvulsants or antiretroviral therapy. Attempts to detect the causative drug among the many administered is not easy and mistaken identification can lead to recurrence of the drug eruption. Techniques to identify the causative drug include intradermal testing, [1] patch tests [2] and in vitro tests including the lymphocyte transformation test, [3] lymphocyte toxicity assay, [4] flow cytometry [5] and cytokine assays [6],[7] but there are problems with the availability, applicability and reliability of these tests. [8]

In our hospital, we have offered oral provocation testing to patients with drug eruptions for many years. [9],[10],[11],[12] In the current report, we present our data on a group of 100 patients with different types of drug reactions who underwent this procedure in our department with the objective of providing them with a list of drugs that they could use safely.

A retrospective analysis of records of all patients who underwent drug provocation at our hospital between April 2003 and March 2009 was performed. All patients who had had a drug reaction were informed that the only reliable method to know which drugs were safe for them was to undertake supervised drug administration which would require admission in hospital for about two weeks and intake of drugs under medical supervision. The duration, nature and frequency of drug reactions, drugs implicated by the patient, and the correlation between drug intake and the reactions were recorded. We included patients with all types of drug reactions viz. urticarial reactions, angioedema, maculopapular drug rash, fixed drug eruption, self-reported multiple drug reactors, Steven Johnson syndrome and toxic epidermal necrolysis.

Patients were admitted in the hospital for testing and written, informed consent was obtained. Drugs and equipment for emergency resuscitation were on hand in the ward and a dermatology resident or consultant was available round the clock.

The list of drugs to be tested was prepared in individual patients depending on the type of reaction and nature of suspected drugs. It consisted of alternatives to the drugs suspected to be the cause of reaction and/or drugs which the patient was likely to need for common illnesses. The latter drugs were albendazole, metronidazole, cefadroxil, amoxicillin, ciprofloxacin, doxycycline, fluconazole, chloroquine, a hematinic preparation containing iron with folic acid, ascorbic acid and vitamin B12, ranitidine, diclofenac sodium, ibuprofen, nimesulide, paracetamol and etoricoxib. Patients who reported severe anaphylactic reactions were not tested with the implicated drugs. Similarly, patients with Stevens Johnson syndrome/toxic epidermal necrolysis (SJS-TEN) were not administered the drug that was believed to be the most likely cause.

Supervised administration was started with placebo followed by the least suspected drug going on to the most suspected drug. Testing was done by administering a single therapeutic dose of the drug per day, in the presence of the ward nurse. If suspicion of a true reaction to a drug in the past was strong, a half-dose was administered on one day followed by the full dose the next day. Initially, one drug was administered per day, but if daily tests continued to be negative, we accelerated the procedure administering one drug every 12 hours in order to shorten the hospital stay.

Patients were monitored for reactions and any symptoms reported were recorded. Symptoms and signs were evaluated by a dermatologist to assess if they represented nonspecific symptoms or a true drug reaction. A true drug reaction was diagnosed when symptoms and the time course of the reaction resembled previously experienced episodes and were accompanied by signs of inflammation in the skin including erythema, wheals, macules and papules. A patient whose findings were not suggestive of a true drug reaction was administered the same drug again to confirm that the reaction was spurious. In patients who developed symptoms during testing, further testing was performed only after all symptoms subsided.

Following completion of testing, a safe drug list containing drugs that had been tested and found safe was provided to the patient. If a true drug reaction was detected, written instructions to avoid the causative drug(s) were given.

The type of drug reaction reported by patients was maculo-papular in 15, fixed drug eruption in 11, urticaria and/or angioedema in 20, Stevens-Johnson syndrome / toxic epidermal necrolysis in 15 and other manifestations in 9 patients. Thirty patients were categorized as self-reported multiple drug reactors. [10]

The number of episodes of drug reactions ranged from 1 to 10, with episodes being most frequent in patients with fixed drug eruptions. Self-reported multiple drug reactors reported many episodes ranging from 2 to 40. These reactions had occurred from a few days to 30 yrs before patients were seen at our hospital.

Medications had been taken for a wide range of illnesses. Some of the commoner indications were pain, headache, cough and cold, and/or fever (44), tuberculosis (15), leprosy (6), seizures (2), neurocysticercosis (2) and diarrhea (2).

Twenty three patients were unable to name the drugs that triggered the reaction. In the remainder, the number of suspected drugs ranged from one to several. One drug was suspected to be the cause in four patients, two drugs in four, three drugs in 12, four drugs in 15, five drugs in 16, six drugs in seven and more than six drugs in 19 patients.

Non-steroidal anti-inflammatory drugs were implicated in 118 episodes, antibiotics in 68 episodes (quinolones in the vast majority), anti-amoebics in 16, anti-tubercular drugs in 15, anti-leprosy drugs in six and other drugs in smaller numbers of episodes. 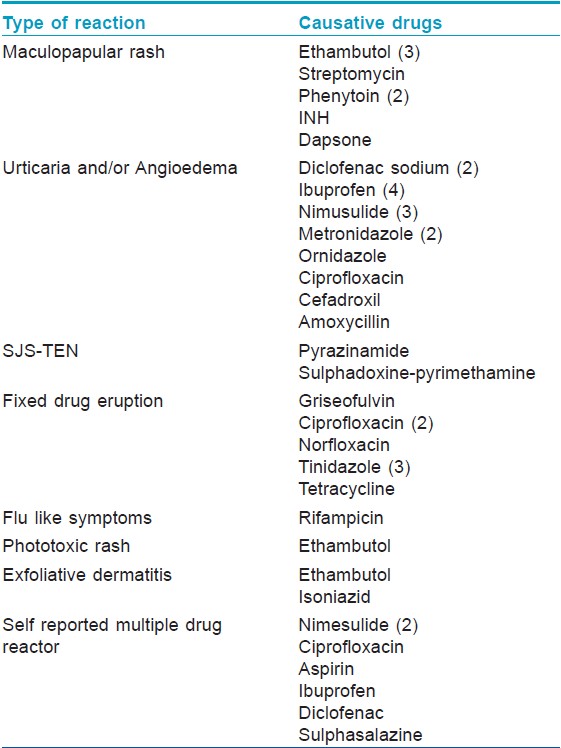 Table 1: Drugs identified as the causative agent in various types of reactions

One patient with exfoliative dermatitis had two episodes of true positive reactions to ethambutol and isoniazid. With ethambutol, she developed itching all over the body, redness and swelling of face, burning sensation in eyes and high grade fever which subsided in about three days. With isoniazid, she developed high grade fever, swelling of face, generalized itching and erythema and peeling of skin (TEN-like) without mucosal involvement, subsiding in about two weeks. Two patients with SJS-TEN had one true positive reaction each. In the first patient, there was generalized itching, flushing and redness of eyes within 10 minutes of taking pyrazinamide; this subsided with intravenous dexamethasone 10mg stat followed by 4mg for two days. The second patient developed swelling of lips, itching over eyes, itching, discomfort and erythema over previously healed lesions which appeared 4 hrs after taking sulfadoxine-pyrimethamine and subsided over a few hours with a single intravenous dose of dexamethasone 10mg and pheniramine maleate 50mg.

There were several spurious reactions. There were four episodes of reaction to placebo, two episodes of itching that did not recur on re-administration of the same drug and 1 episode of fever and headache 3hrs after albendazole intake that subsided spontaneously in 8-10hrs. In the remaining episodes a variety of symptoms were noted including mild itching, perceived swelling of the face, uneasiness, heaviness in the head, feeling of heat, dizziness, nausea, crying, excessive scratching behavior and feverish feeling. None of these episodes was accompanied by clinical signs of an inflammatory lesion on the skin.

Preventing the recurrence of drug eruptions requires the identification and avoidance of the causative drug or the demonstration of the safety of drugs intended to be used. Unfortunately, there are no reliable in vitro tests to achieve either goal. Skin prick tests, patch tests, lymphocyte transformation tests and cytokine assays have been used by various workers but do not provide clinically relevant results in individual patients. Drug provocation tests have been recommended but there are concerns about acceptance, safety and medico-legal aspects. [13],[14]

A novel aspect of our study was that the goal of challenge testing was to identify drugs that can be safely taken rather than to identify the drug that caused a reaction. With this procedure, drugs strongly suspected to be the cause of an eruption are not administered. However, since mistakes can occur in identifying the causative drug even when the process is undertaken by experts, [15] supervised administration of other drugs provides assurance that the recommended alternative drugs are indeed safe. Since the end point of the procedure was to develop a list of drugs safe for use (not the precipitation of a reaction), a number of patients received the list without developing any reaction at all.

The risk of an adverse outcome due to a positive challenge test is relatively low during supervised administration as a small dose of the drug is administered under medical supervision in a setting where reactions can be diagnosed and treated early. Thirty four of 100 patients in our series had a true drug reaction in the ward but these were quickly controlled. Of note, even recurrences of severe drug reactions such as SJS and TEN could be controlled. Outcomes are likely to be significantly worse if a patient who does not have a safe drug list and is unaware of the causative drug inadvertently takes it in full doses while she is away from a medical facility.

This procedure has limitations that we have previously detailed. [10] Briefly, the protocol can only be used in patients willing to be admitted in the hospital for fairly long period and tested by re-challenge. Delayed reactions occurring more than 24 hours after drug intake cannot be evaluated. However, since most significant drug reactions develop within a few hours after re-exposure [16] the current procedure may be adequate. Reactions occurring due to interaction between drugs, foods and other environmental agents cannot be identified using our protocol but such reactions are probably quite rare as we were unable to find any documented instances in the literature.

It may be possible to undertake this procedure in a day care setting to avoid the trouble and expense of a fairly long hospital stay. However, we strongly recommend that a dermatologist must be available at short notice to evaluate any symptoms or signs the patient reports: both to provide treatment in case of true reactions and to recognize a spurious reaction when it occurs. In our experience, more than half the reactions (52 of 96) reported after drug intake were found to be spurious. This distinction cannot be left to patients, family members, nursing or general medical staff.

Drug provocation tests appear to be effective in providing a list of drugs that can be taken safely by patients who have suffered a drug eruption previously.