Porokeratosis is a clonal disorder of keratinization that clinically manifests as centrifugally expanding, annular plaque(s) with a thready, ridge-like margin (often with a furrow), which histopathologically shows pathognomonic cornoid lamella.[1],[2] We report a clinically typical lesion of porokeratosis in the buccal mucosa of a patient with disseminated superficial porokeratosis.

A 26-year-old man presented with complaints of multiple, asymptomatic lesions involving the face, trunk, extremities and scrotum for 8 years. Individual lesions began as small papules gradually increasing to form small, annular, barely palpable plaques. There was no change in the lesion on sun exposure and no oral symptoms. His brother and maternal uncle also had similar lesions. There was no history suggestive of immunosuppression.

On examination, the face, extensor surfaces of upper and lower extremities, trunk, scrotum, proximal nail fold of the right fourth toe and left heel revealed multiple papules and plaques ranging from 0.5 to 2 cm in diameter [Figure 1a] , [Figure 1b], [Figure 1c]. All the lesions were annular with a thready margin; a furrow was not discernable in most of the lesions and no central atrophy was observed. Oral examination revealed a similar solitary, annular plaque of about 2 cm × 1.5 cm with a thready, white, elevated margin on the left buccal mucosa [Figure 1d]. The centre of the oral lesion was paler than the surrounding mucosa.

Biopsy from the annular lesion on the arm showed features of porokeratosis with a focal column of parakeratotic stratum corneum invaginating the epidermis, with lymphocytic exocytosis and a lympho-histiocytic infiltrate in the underlying upper dermis [Figure 2a] and [Figure 2b]. The patient refused biopsy from the oral lesion. Serology for human immunodeficiency virus was non-reactive.

Oral involvement in porokeratosis is extremely uncommon. Of all the variants, it is seen most frequently in porokeratosis of Mibelli in which it has been reported to occur more commonly on the lips and tongue while involvement of buccal mucosa is decidedly rare [Table - 1]. It has also been reported in porokeratosis palmaris, plantaris et disseminata.[10] There is a prior report of oral lesions in a patient with disseminated superficial porokeratosis.[5] This patient had a solitary plaque on the dorsum of the tongue, in addition to multiple small annular plaques in a generalized distribution, including lesions on the scrotum and penis [Table - 1].[5] Our patient also had similar involvement of the trunk, upper and lower limbs, and scrotum. The skin lesions were morphologically like disseminated superficial porokeratosis and the diagnosis was confirmed histologically. Although we could not biopsy the buccal lesion, the morphology of the lesion (annular plaque with a thready elevated margin) was strikingly similar to that on the skin. 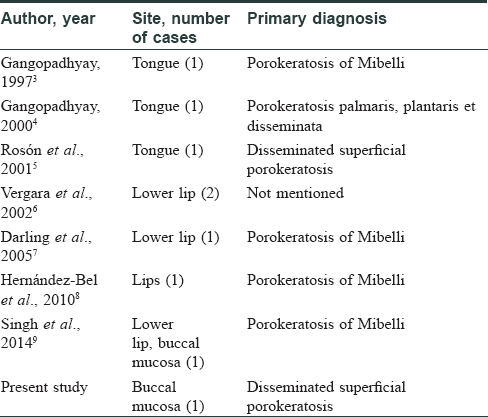 We are grateful to Prof. M. Ramam, Department of Dermatology and Venereology, All India Institute of Medical Sciences, New Delhi, for his help in histopathological diagnosis and providing the photomicrographs.