A 22-year-old man presented with a firm, tender, 2.5 × 2.5 cm skin-colored nodule with well-defined margins on the mid-plantar aspect of his left foot [Figure - 1]a. The overlying skin was unremarkable and non-adherent to the mass which was fixed to the underlying soft tissue structures. The lesion had gradually enlarged over the last 14 years and was painful. There was history of a burn injury at the same site, two months prior to the onset of the lesion. The differential diagnoses of nodular fasciitis and post-traumatic neuroma were considered.

Fine needle aspiration cytology revealed fascicles and scattered spindle-shaped cells embedded in an eosinophilic matrix. The cells had plump, elongated nuclei with vesicular chromatin and scant to moderate cytoplasm. The features were suggestive of a benign spindle cell tumor such as a fibroma or schwannoma. Contrast enhanced magnetic resonance imaging demonstrated a 1.8 cm × 1.7 cm sized well-defined lesion (TI hypointense, T2 hyperintense) in the subcutaneous plane on the plantar aspect of the mid-foot [Figure - 1]b. Some T2 hypointensities were seen within the lesion. It also showed mild post-contrast enhancement. Superiorly, the tumor indented the plantar muscles and fascia with loss of fat planes while the bones were normal. The patient was referred to the plastic surgery service for wide local excision and reconstruction. The defect was reconstructed using a local hatchet flap from the non-weight bearing instep area of the sole. Excisional biopsy revealed a spindle cell tumor arising from the aponeurosis in the deep subcutaneous tissue. The tumor cells were arranged in fascicles and had bland spindle-shaped nuclei and moderate eosinophilic cytoplasm. Foci of calcification and ossification were observed [Figure - 2]a and [Figure - 2]b. Focal areas of increased mitosis were seen with a mitotic count of 1/10 high-power fields [Figure - 3]a. However, the Ki-67 index was below 1% [Figure - 3]b and there was no significant nuclear atypia. Based on these findings, a diagnosis of calcifying aponeurotic fibroma was made. No recurrence was evident at follow up one and a half years after excision.

Calcifying aponeurotic fibroma, classified under superficial musculoskeletal fibromatosis, is an uncommon, locally aggressive, soft-tissue tumor originating from fibroblasts.[2] Initially designated as juvenile aponeurotic fibroma, the name was changed as it affects older age groups as well.[1] The peak incidence of this tumor occurs between 8 and 14 years of age.[3] The sites of predilection include the hands and feet with almost 77% of reported cases involving the palms and fingers and 13% involving the feet. Other sites may also be affected.[3],[4],[5] There is usually no preceding history of trauma. The typical clinical presentation is as an ill-defined, slowly progressing, firm, subcutaneous mass, measuring <3 cm in diameter, free from the overlying skin but adherent to the underlying soft tissue. Adjacent bone involvement may rarely occur. Although usually asymptomatic, significant pain has been associated with the tumor.[6] Two growth phases are described: in the early diffuse phase, it is infiltrative and devoid of calcification and the late compact phase is characterized by well-defined borders, calcification and cartilage formation.

The definitive diagnosis of calcifying aponeurotic fibroma is made on histopathology which demonstrates a poorly encapsulated tumor composed of parallel-oriented spindle-shaped fibroblasts with indistinct cytoplasm and round to ovoid nuclei arranged in fascicles around central areas of calcification. The cells are enmeshed in a dense collagenous stroma. Foci of chondroid differentiation and osteoclast-like giant cells are also observed. Mature bone formation has also been described in a long-standing lesion.[5] Occasional mitotic figures may be detected, but nuclear atypia is not seen.

The differential diagnoses of calcifying aponeurotic fibroma in adults are discussed in [Table - 1]. 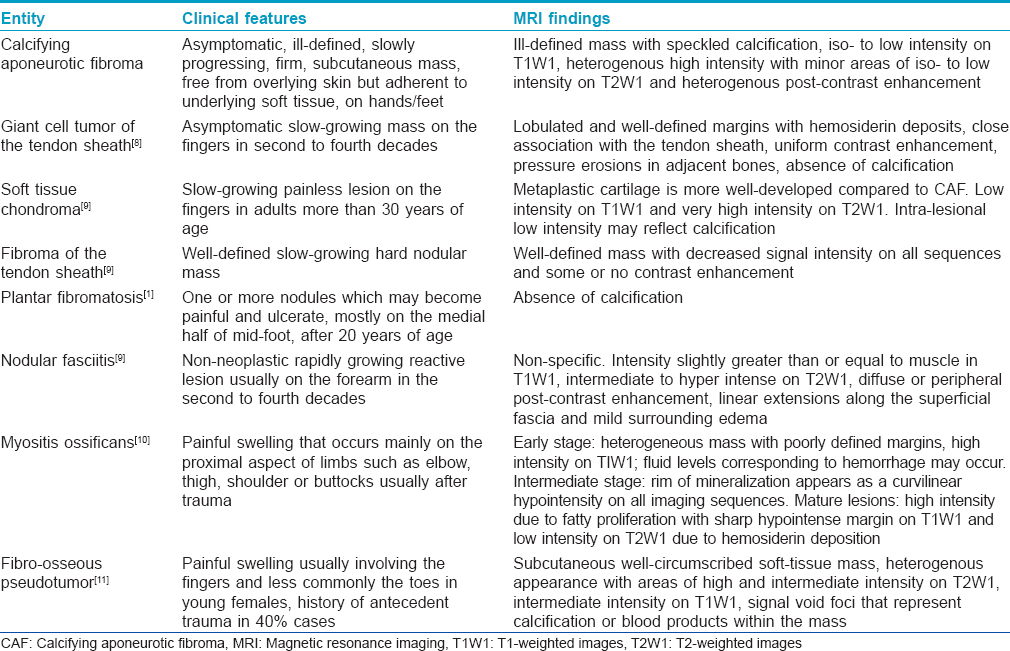 Table 1: Differential diagnoses of calcifying aponeurotic fibroma in an adult

The treatment of choice for the tumor is local excision including a margin of surrounding normal tissue. The probability of recurrence is 50%, due to its poorly circumscribed growth pattern. Malignant transformation, though rare, has been described.[12] Strict follow-up is recommended and repeat surgical excision is required in case of recurrence.

The present case was unusual as the tumor was extremely painful and developed after a burn injury to the affected site. This is in contrast to the asymptomatic nature of the tumor in the majority of cases and its de novo occurrence described in previous reports. Further, the tumor demonstrated prominent foci of calcification and ossification that may be attributed to its prolonged duration.