A 49-year-old woman presented at the Changi General Hospital, Singapore with an 18-month history of leg rashes associated with numbness. There was no fever or associated constitutional symptoms. She underwent hysterectomy for uterovaginal prolapse a year earlier. Cutaneous examination revealed brown, mildly tender nodules on the shins with livedo racemosa [Figure - 1]a and [Figure - 1]b. Laboratory results showed an elevated erythrocyte sedimentary rate of 35 mmol/h (normal range: 3–15 mm/h). The complete blood count, creatinine, liver function test and chest radiograph were normal. Hepatitis B and C screen, antineutrophil cytoplasmic antibodies and antinuclear antibodies were negative. Antithrombin III, Factor V Leiden, protein C and S, extractable nuclear antigen screen, β-2 microglobulin, anticardiolipin antibodies and homocysteine levels were normal. A skin biopsy from her shin showed focal fibrinoid necrosis of medium-sized blood vessels in the subcutis with a surrounding dermal lymphohistiocytic infiltrate. There was thrombosis of the vessel lumen. The epidermis was unremarkable [Figure - 2]a and [Figure - 2]b. A review of the histology from the cervix specimen demonstrated necrotizing arteritis with fibrinoid necrosis and perivascular inflammatory cell infiltration [Figure - 3].

What Is the Diagnosis?

Polyarteritis nodosa is a systemic vasculitis characterized by necrotizing inflammation affecting medium-sized and small muscular arteries. In view of livedo racemosa, neurological involvement and negative antineutrophil cytoplasmic antibodies, this is the most likely diagnosis. The American College of Rheumatology has established 10 criteria for the classification of polyarteritis nodosa.[1] Three of the 10 criteria showed a sensitivity of 82.2% and specificity of 86.6% for the classification of polyarteritis nodosa in a patient with a documented vasculitis [Table - 1]. 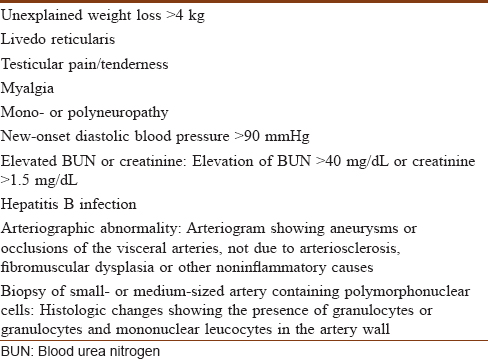 Table 1: American College of Rheumatology 1990 criteria for the classification of polyarteritis nodosa

The risk of long-term systemic vasculitis in patients who have incidental single-organ vasculitis is low. However, if patients develop signs of systemic polyarteritis nodosa or giant cell arteritis, a thorough systemic evaluation should be considered. Isolated vasculitis of the female genital tract is rare, typically occurring in women in their 40s and often an incidental finding from hysterectomy specimens. Vasculitis of the genital female tract of the classical polyarteritis nodosa-type occurred in 91.5% of cases reported in the literature, and the rest presented with isolated giant cell arteritis-type. The polyarteritis nodosa-type commonly involved the cervix in up to 65.7%.[2]

In polyarteritis nodosa, the extent of organ involvement and disease progression guides treatment. The five-factor score revised in 2011 by the French Vasculitis Study Group showed that prognostic factors which predicted mortality include renal insufficiency (serum creatinine >1.58 mg/dL), proteinuria >1 g/day, gastrointestinal involvement, cardiomyopathy and age above 65 years.[4] Treatment mostly relies on corticosteroid therapy. In this patient with mild disease (five-factor score = 0), corticosteroids should be the initial treatment option of choice. First-line corticosteroid therapy is able to achieve and maintain remission in about 50% of patients with mild non-hepatitis B- and C-related polyarteritis nodosa. In contrast, other forms of therapy including cyclophosphamide, rituximab and plasma exchange have been shown to be effective in non-hepatitis B- and C-related polyarteritis nodosa; however, the usage is mainly reserved for those with frequent relapses involving multiple organs which are refractory to systemic steroid therapy.[5],[6] Our patient was treated with prednisolone 30 mg daily (0.5 mg/kg/day) for 2 weeks, followed by prednisolone 60 mg daily (1 mg/kg/day) for further 4 weeks. Her leg numbness and rashes improved, but she was subsequently lost to follow-up.