Paraffin-embedded micrographic surgery for the treatment of dermatofibrosarcoma protuberans: Analysis of 33 patients

Dermatofibrosarcoma protuberans is a rare, low-grade soft tissue tumor which is locally aggressive, but has a low risk of metastasis. It accounts for <0.1% of all malignancies and approximately 1% of all soft tissue sarcomas.[1] This tumor is usually diagnosed in young to middle-aged adults, although some cases have been reported in children.[2]

Clinically, it presents as an asymptomatic skin-colored plaque or tumor and diagnosis is frequently delayed because of its indolent nature. As the tumor grows, lateral and deep infiltration begins and protuberant nodules develop on the surface [Figure - 1].[3]

The most common anatomic location is the trunk, followed by the extremities and the head and neck.[4]

Histological features include a dense collection of spindle cells arranged in a storiform pattern in the dermis infiltrating the subcutaneous fat, and with tentacle-like projections into fascia or muscle.[4],[5] Immunohistochemical markers are used to improve diagnostic accuracy. CD34 antigen is selectively expressed in dermatofibrosarcoma protuberans [Figure - 2]. CD34 can help to differentiate this tumor from dermatofibroma which is CD34 negative and positive for factor XIIIa. In addition, CD68 selectively stains for malignant fibrous histiocytoma and atypical fibroxanthoma, but not for dermatofibrosarcoma protuberans.[6],[7]

A retrospective review was performed on patients with dermatofibrosarcoma protuberans treated with paraffin-embedded micrographic surgery in our department between January 2002 and June 2015.

In all cases, histological diagnosis from a tumor biopsy preceded the micrographic excision.

Data compiled from each case included patient age, sex, anatomic site distribution, number of stages of Moh's micrographic surgery necessary to achieve negative margins, the incidence of recurrence and the duration of follow-up.

During the first stage, the tumor or residual scar with a margin of 10-20mm (10mm for head and neck and 20mm for trunk and extremities) is removed [Figure - 3]. The defined margin of tissue and underlying fat was removed and mapped for precise anatomical orientation [Figure - 4].

The pathologist marked the tissue for formalin fixation during the first 24 hours [Figure - 5]. Thereafter, tissue was divided into multiple specimens that were color coded for anatomical orientation and placed in cassettes for paraffin-embedded sections [Figure - 6]. The tissue was sectioned horizontally by a pathology technician and stained with hematoxylin and eosin [Figure - 7]. Tissue margins were evaluated by both surgeon and pathologist, within 2 or 3 days.

The process of excision, mapping and microscopic examination was repeated until no tumor was found microscopically. Immunostaining with CD34 antibody was only employed in persistent cases to discriminate between scar tissue and residual tumor or in hypocellular tumors.

We placed a purse-string suture and temporarily covered the skin defects with synthetic wound dressing until complete excision was proven [Figure - 8].

Between 2002 and 2015, we treated 33 patients with histologically confirmed dermatofibrosarcoma protuberans using paraffin-embedded micrographic surgery [Table - 1]. Twenty three (69.6%) were women and 11 (33.4%) were men. The mean patient age at surgery was 41 years (ranging from 20 to 71 years). Nineteen (57.5%) patients presented with tumors on the trunk, 7 (21.2%) on the upper limbs, 4 (12.2%) on the head and neck and 3 (9.1%) on the lower limbs. Twenty seven had primary tumors and 6 were referred for Moh's micrographic surgery after previous incomplete excisions. 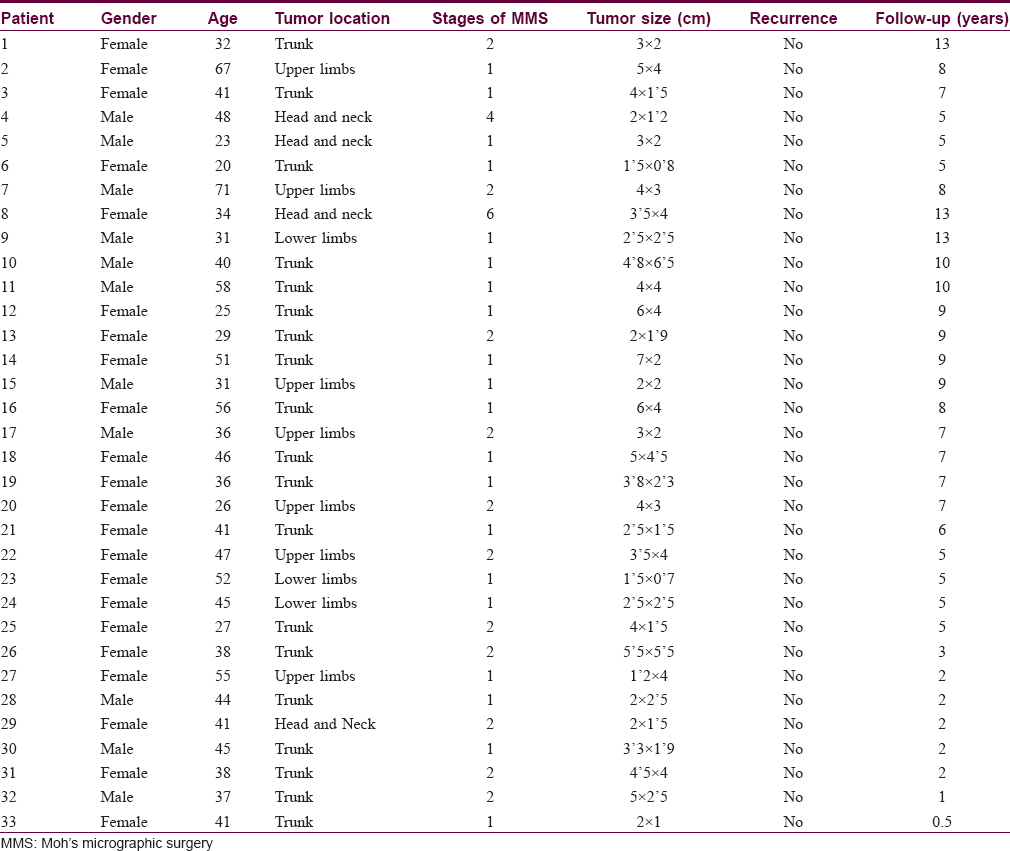 There were no cases of myxoid or fibrosarcomatous variants in our patient group.

All patients had either primary disease, defined as previously untreated lesions or persistent disease, which included patients who had undergone prior surgery with histologically positive margins. In our series, there were no cases of recurrent disease.

After the first stage of micrographic surgery, including an initial lateral margin, 20 (60.6%) tumors were completely excised, 11 (33.3%) tumors required two stages, and one tumor each (3.0%) four and six stages respectively. We used immunochemical staining with CD34 antibody in four patients.

Patients were prophylactically treated with antibiotics according to our hospital protocol. None presented with surgical wound infection.

Patients were monitored for recurrence every 3 months during the first year following the procedure and every 6 months thereafter. Clinical evidence of local recurrence has not been noted in any of these patients so far, after a mean post-procedure interval of 78 months (range, 5 to 156 months).

Dermatofibrosarcoma protuberans is a rare dermal tumor with a high risk of local recurrence. Its aggressiveness depends on four risk factors: Involvement of the head, depth of tumor invasion, degree of atypical, myxoid or sarcomatous histologic differentiation and recurrence after previous treatment.[13]

The goal of Moh's micrographic surgery is to histologically inspect 100% of the margins of removed tissue. Positive margins result in the removal of a deeper layer until all margins are free of malignancy. Several retrospective reviews have shown that the recurrence rate of dermatofibrosarcoma protuberans treated with Moh's micrographic surgery is approximately 1%.[3],[15],[16]

Traditional Moh's micrographic surgery uses frozen sections. We perform paraffin-embedded micrographic surgery because our patient group includes persistent tumors that have been previously treated at other institutions, with histologically positive margins. Advantages of the paraffin-embedded method are the high quality of the resulting slides, accurate discrimination of fine tumor strands from normal skin and the possibility of performing immunohistochemistry for CD34 in uncertain cases.

Using frozen sections, it may be difficult to distinguish between residual tumor and scar with reactive fibroblast proliferation, especially in the setting of a recurrent tumor.

Table 2: Results of other case series of patients treated with paraffin-embedded micrographic surgery

Some institutions try to resolve this problem by taking an extra layer after completion of traditional frozen Moh's micrographic surgery and sending it for permanent paraffin sectioning for additional screening with CD34 immunostaining.[13],[23]

The main limitation of using paraffin-embedded sections is time, increasing inconvenience for patients who do not live locally and who require admission. Another potential disadvantage is the discomfort from open wounds between stages and the increased risk of infection with delayed closure.

Since 70% of dermatofibrosarcoma protuberans may extend microscopically at least 1 cm from the edge of the tumor, we recommend an initial lateral margin of at least 1 cm.[8] In our study, 3 of the 4 patients treated with a 1 cm initial margin required more than one stage and all of them had lateral and deep involvement. On the other hand, 10 of the 29 patients with an initial margin of 2 cm needed more than one stage but only 2 of them had lateral involvement and both were persistent tumors. In a recent study, Serra-Guillén et al. calculated that the minimum margin needed to achieve complete clearance in 74 cases of primary dermatofibrosarcoma protuberans was 1.34 cm.[24] According to the latest publications and the results of our study, we now perform initial excisions with a 1 cm margin for primary and persistent tumors of the head and neck, a1.5 cm margin for the rest of the body and a 2 cm margin only in cases of persistent tumors.

The majority of local recurrences of this tumor occur within the first 3 years with about half presenting within 1 year of surgery.[8] Thirty two of our 33 patients have been followed up for at least 1 year and 26 of them for more than 3 years, all of whom remain tumor free at the time of publication. All of our patients continue to be monitored every 6 months for recurrences because after Moh's micrographic surgery, late local recurrences (after more than 10 years) may occur.[13] Accordingly, we believe that patients with dermatofibrosarcoma protuberans should be followed up for life.

Non-surgical treatment modalities include radiotherapy which has been used alone or as an adjunct to surgery to decrease local recurrence rates.[25]

Ninety percent of all dermatofibrosarcoma protuberans contain the translocation t (17;22) which results in fusion of the collagen 1A1 gene from chromosome 17 with the platelet-derived growth factor B gene on chromosome 22. Imatinib mesylate is a tyrosine kinase inhibitor that is approved for use in dermatofibrosarcoma protuberans refractory to surgery and for metastatic disease.[3],[26]