The study included 27 patients with allergic contact dermatitis to hair dye who visited Pusan National University Hospital from May 2010 to June 2011 and who had para-phenylenediamine sensitivity identified by the Korean standard antigen patch test series (Chemotechnique ®, Vellinge, Sweden). Subjects volunteered to be part of the study after they were explained the purpose, process and possible problems arising from patch testing. The study was approved by the Institutional Review Board of Pusan National University Hospital (clinical trial number: F2010004).

All patients were re-tested for para-phenylenediamine sensitivity with the Korean standard antigen patch test series following which they were patch tested with 15 hair dyes advertised as “hypoallergenic,” “para-phenylenediamine-free,” or “non-allergenic.” Although the research staff tried to contact the producers of the hair dyes for accurate content information, the product information used for the study was obtained from the commercial packing of the hair dyes or their package inserts. Common ingredients present in the 15 hair dye products studied were tabulated and categorized by their roles, such as dye intermediate, oxidizer and others [Table - 1]. 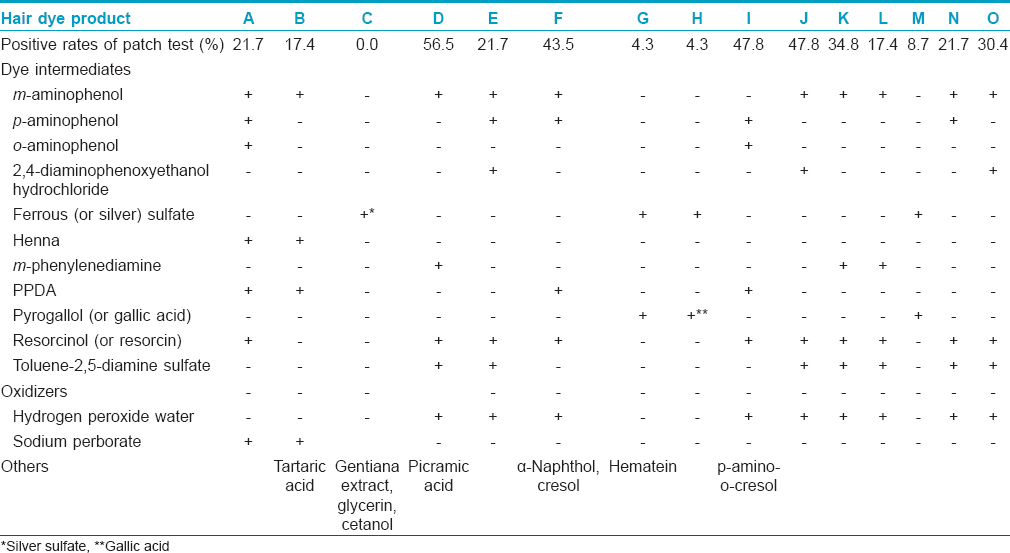 The hair dyes used for patch testing were designated as “A-C” for 3 premixed products and “D-O” for 12 products that had two separate components, number 1 and number 2, to be mixed before use. The premixed hair dyes (A–C) were patch tested “as is” while the two components of 12 hair dye products (D–O) and their mixtures were patch tested separately. The patch test was performed using 15 µL of each hair dye product (1% in pet) by the Finn chamber method (Finn chambers on Scanpor; Epitest®, Tuusula, Finland).[1],[2] The patch test units were applied on the upper back and subjects returned after 48 hours (day 2) for the primary reading that was made 30 minutes after the removal of patches. The final reading was made on day 4 and results were graded according to International Contact Dermatitis Research Group standards.[3] Readings of 1+ or higher, persisting on day 4, were considered significant for final analysis. 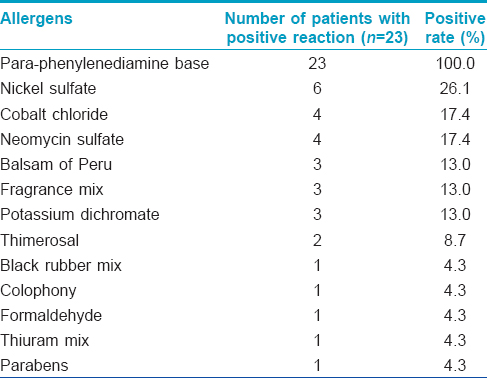 Table 2: The results of patch testing with Korean standard series

Table 4: The patch test results of hair dyes in the market in patients with allergic contact dermatitis due to para-phenylenediamine

Para-phenylenediamine is an effective dye ingredient that, when mixed with other ingredients, enables black or other color dyes to dye hair permanently. It is also one of the most important antigens responsible for allergic contact dermatitis to hair dye.[4] In cases of allergic contact dermatitis, avoiding exposure to the causative allergen is the most important measure leading to improvement of symptoms and prevention of recurrence but hair dyeing is often deemed necessary for social and personal reasons. Several hair dyes are now advertised to be “hypoallergenic,” “para-phenylenediamine-free,” or “non-allergenic”, and many consumers choose their hair dyes based on these advertisements. However, a significant number of patients visit hospitals for allergic contact dermatitis after using such products necessitating accurate identification of the allergen to prevent recurrences. Although open patch testing has been successfully used to determine sensitivity due to any particular hair dye,[5],[6] we preferred the closed Finn chamber method because we wanted to test multiple dye products. During our preliminary study of five patients whom we subjected to open patch tests and 48 h contact time with 15 hair dyes, the results were ambiguous in all but one patient This happened because of wiping, smearing and mixing of different hair dyes due to body movements and contact with clothes during the procedure and also caused discomfort to some patients.

The two premix hair dye products (A, B) which contained the oxidizer sodium perborate each showed positive rates of 21.7% and 17.4%, respectively [Table - 3] and [Table - 4]. However, these products also contained para-phenylaminediamine. The oxidizers, i.e. components number 2, of nine hair dye products (D, E, F, I, J, K, L, N, O) showed positive reactions ranging from 0% to 30.4%. Conventionally, the component number 1 is a dye intermediate and component number 2 is an oxidizer. However, it is not always possible to identify them as number 1 or number 2 in the absence of clear marking by the manufacturer, and that was also noted by us. Similarly, substances advertised as the unique characteristics of the products, such as charcoal, squid ink, mulberry extract, herb, mugwort and ginseng, swertia, green mud and pearl were not labeled. It appears that the high positive rates from premixed hair dyes “A” and “B” were probably due to the oxidizer para-phenylenediamine and/or aminophenol while the wide range of positive rates (0–30.4%) from component number 2 in nine products (D, E, F, I, J, K, L, N, O) could be due to contents that are not labeled by the manufacturer.

Small sample size, the possibility of false positive reactions due to closed patch testing and the difficulties in delineating the putative allergen in the hair dyes for lack of information on the product contents are some of the limitations of this study.