The protocol of this study was approved by the Ethics Committee, National Institute of Health, Malaysia as part of the Malaysian Psoriasis Registry. All the patients with clinical diagnosis of psoriasis who gave voluntarily consent were studied. We collected data on nail disease, demographics and skin psoriasis. The nail psoriasis was divided into four types, namely pitting, onycholysis, discoloration and subungual hyperkeratosis. We excluded nail diseases due to other causes e.g. onychomycosis and drugs. Demographic data include age, gender, race, body mass index (BMI) and family history of psoriasis. Information on skin psoriasis includes duration of disease, body surface areas (BSA) involvement, treatment administered and quality of life measured by the dermatology life quality index (DLQI). 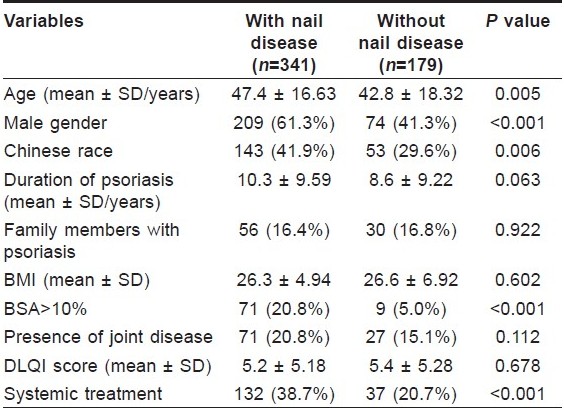 Table 1: Clinical characteristics of psoriatic patients with and without nail disease

Patients with nail diseases were more likely to be on systemic treatment (38.7% c.f. 20.7%, P<0.001). All the patients with nail psoriasis had combined topical clobetasol diproprionate and calcipotriol for their nail disease. None had steroid injections of the nail matrix. Systemic agents used included methotrexate in 31.7%, cyclosporine 5.9%, acitretin 5.6%, sulfasalazine 2.9%, systemic corticosteroids 1.8%, hydroxyurea 0.3% and etanercept in 0.3%.

The pattern of nail disease seen in Sarawak General Hospital was different from national and regional pattern. In Malaysia and Singapore, the main pattern seen was pitting, followed by onycholysis, subungual hyperkeratosis and discoloration. [1],[2] In India, the pattern was onycholysis followed by discoloration, pitting and subungual hyperkeratosis. [3]

According to the findings of this study, nail psoriasis is more common in males and those with more severe skin disease as seen in Singapore. [2] Additionally, they found an association with older patients and joint psoriasis. [2] The association of joint and nail psoriasis was also demonstrated in India. [4] We failed to demonstrate this association. This might be due to the low pick up rate of arthritis among our patients. We also found that Chinese were more likely to have nail disease compared to the native community in Sarawak. The reason for the lower rate of nail disease among the native community in Sarawak is unknown.

We also failed to demonstrate any association of nail disease and quality of life, although patients with nail psoriasis had more severe skin disease. This might be related to the higher rate of nail psoriasis among the older patients, who are less cosmetically concerned about the appearance of their nails and skin. It is also related to the attitude of the locals who do not complain about their disease and just accept their condition as it is.