Pattern and prevalence of physiological cutaneous changes in pregnancy: A study of 2000 antenatal women

During pregnancy immunologic, endocrine, metabolic and vascular changes occur that make pregnant women particularly susceptible to changes of skin and its appendages. Whether physiologic or pathologic, these changes affect virtually every organ of pregnant women including the skin. Some of these changes are due to de novo production of a variety of protein and steroid hormones by the fetoplacental unit as well as the increased activity of maternal pituitary, thyroid and adrenal glands. [1]

Cutaneous changes and eruptions during pregnancy are exceedingly common and in some cases a cause for substantial anxiety on the part of the prospective mother. Some of these are benign and reversible after delivery whereas others can have potential effects on the fetus in terms of morbidity and mortality. [1] The present prospective study is an attempt to provide a framework for an effective approach to the spectrum of physiological cutaneous changes encountered in antenatal women.

Two thousand randomly selected, asymptomatic pregnant females, attending the Outpatient Department of Obstetrics and Gynecology, Govt. Medical College and Hospital, Jammu, for a routine antenatal checkup, irrespective of the period of gestation, were enrolled from October 2007 to September 2009. After an informed consent, a detailed history was recorded followed by complete general physical, relevant systemic and a detailed dermatological examination of all patients to study the physiological changes of skin and its appendages. Relevant clinical details were recorded and results compiled in tabulated form. 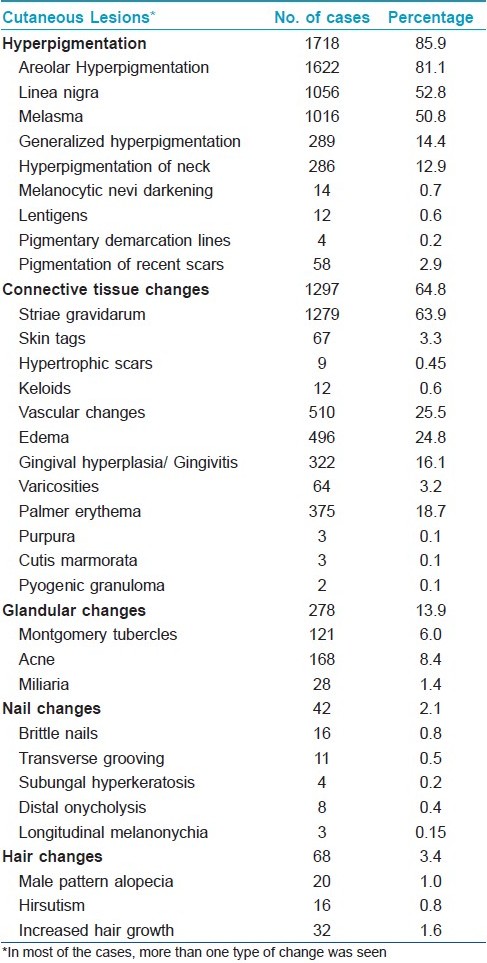 Pigmentary changes were most common, seen in 85.9% cases which were consistent with earlier studies. [2],[3],[4] Melasma [Figure - 1] has been reported to occur in 50-70% of pregnant women. [4] It was seen in 50.8% of our cases, thus conforming to earlier findings. [2],[5] A very low prevalence has been reported by some studies. [3],[6],[7] The possible reason for discrepancy in prevalence could be the skin phototypes and racial differences. The commonest clinical pattern found was the centrofacial pattern (76%) which was consistent with earlier reports. [3],[4] Others have found the malar pattern to be the commonest. [5]

Hyperpigmentation of the neck was seen in 12.9% cases whereas Muzaffar et al., [2] reported it in 24.2% cases. Pigmentary demarcation lines, known to appear for the first time during pregnancy were seen in 0.25% cases, similar to 0.3% by Rashmi et al. [3]

Striae gravidarum [Figure - 2] were observed in 63.9% cases, comparable to those reported earlier. [2],[3],[8] The most common site involved was the lower abdomen (92.7%), with an onset mostly during the second trimester, similar to that reported by Chang et al. [8] Familial and racial factors are said to play a role in their development. [8] None of our patients were aware of it.

Vascular changes result from distention, instability and proliferation of vessels [9] and were seen in 25.5% cases. Non-pitting edema over the hands, feet and face was observed in 24.8% cases with an onset mostly in the third trimester . Muzaffar et al., [2] reported edema in 48.5% whereas Rashmi et al., [3] reported it in 9.8%. Varicosities [Figure - 3] were seen in 3.2% cases , comparable to the earlier studies. [2],[6] A higher prevalence of up to 40% has been reported. [9]

Palmar erythema was observed in 18.7% and spider angioma in 2.1% cases, consistent with other studies. [2],[4] Rashmi et al., [3] reported no case of palmar erythema. Saudeau et al., [7] observed vascular spiders in 53% pregnant women. This discrepancy could be due to erythema being readily appreciated in light-skinned people.

Gingivitis [Figure - 4] may occur in up to 100% of pregnant women with varying degree of severity; [4] 16.1% cases of gingivitis were seen which is in agreement with earlier reports. [2]

The cause as well as significance of nail changes occurring in pregnancy is unknown but they have been described. [2],[3] These were seen in 2.1% of our cases. During pregnancy, conversion of hair from anagen to telogen is slowed down which accounts for observed increase in percentage of anagen hair and decrease in telogen hair. [2],[9] Hair changes were seen in 3.4% cases, comparable to those reported by Rashmi et al. [3] Muzaffer et al., [2] reported them in 12.8% cases.

As the knowledge accumulates regarding the interaction of pregnancy with skin diseases, it can be concluded that a variety of cutaneous lesions can be seen in pregnant women. Awareness about and recognition of their clinical presentation is important for correct diagnosis that will direct the most appropriate laboratory evaluation and careful management in an effort to minimize maternal and fetal morbidity.