Pattern of pediatric dermatoses in Kashmir valley: A study from a tertiary care center

Skin diseases in the pediatric population are common all over the world with the reported incidence varying between 9% and 37%. [1] This cross-sectional study was conducted to document the types of skin disorders prevalent among Kashmiri children aged upto 16 years. We enrolled 1079 consecutive children attending the dermatology, STD and leprosy outpatient department of SMHS Hospital (672 children) and the pediatrics outpatient department at GB Pant Hospital (associated teaching hospitals of Government Medical College, Srinagar) (407 children) from December 2012 to July 2013. The patients were grouped as infants (day 1-1 year old), preschool children (2-5 years old), school children (6-10 years old), and adolescents (11-16 years old). A detailed general, systemic, and cutaneous examination was done. Relevant investigations were carried out wherever necessary.

Of the total 1079 patients examined, preschool children comprised 35.5%, followed by infants (33.2%), school children (19%), and adolescents (12.3%). The male:female ratio was 1.4: 1. Out of the 407 children attending the pediatrics outpatient department, one hundred and twenty eight patients had no cutaneous findings. A total of 76 dermatoses were recorded and divided into 16 groups [Table - 1]. Considering the individual dermatoses, the top ten were Mongolian spot (10.2%), papular urticaria (8.9%), tinea capitis (6.9%), pityriasis alba (5.2%), Molluscum contagiosum (4.2%) [Figure - 1], scabies (3.9%), seborrheic eczema (3.9%) [Figure - 2], impetigo (3.7%), varicella (2.5%), and hemangiomas (1.9%). Among infections, viral infections were the most common, followed by fungal, bacterial, parasitic, and mycobacterial [Table - 2], [Table - 3], [Table - 4]. Mycobacterial infections consisted of one case each of lupus vulgaris [Figure - 3]and scrofuloderma. There was no case of leprosy. The most common type of eczema was pityriasis alba [Table - 5]. Pigmentary disorders were seen in 14.1% cases, with Mongolian spot being the most common (71.9%) [Figure - 4]. Among other pigmentary disorders, vitiligo accounted for 42% of cases, followed by nevus anemicus, ephelids, lichen striatus, and melasma. In the hypersensitivity disorder, papular urticaria, which constituted 8.9% of all dermatoses, was predominantly seen in preschool children. Acne constituted 3.2% of all disorders group. Keratinization disorders included cases of lamellar icthyosis, non-bullous icthyosiform erythroderma, diffuse palmoplantar keratodermas [Figure - 5]a and b. Papulosquamous disorders accounted for 1.8% of all cases and included psoriasis, lichen planus, and pityriasis rosea. Among the hair disorders, alopecia areata (52.6%) was the most predominant followed by telogen effluvium (21%), canities (15.8%), androgenetic alopecia (5.3%), and monelithrix (5.3%). Sweat gland disorders included miliaria and hyperhidirosis. Neurocutaneous disorders encompassed Sturge Weber Syndrome, seen in two preschool boys, a single case of neurofibromatosis type 1 in a preschool boy and four cases of tuberous sclerosis in school children and adolescents. Among photodermatoses, polymorphic light eruption was the most common. A case of Kindler′s syndrome in a 3-year-old girl was also documented. Five cases of epidermolysis bullosa were documented [Figure - 6]a-c. Nutritional and metabolic disorders such as acrodermatitis enteropathica [Figure - 7] and congenital erythropietic porphyria comprised 0.4% of all the disorders. Miscellaneous disorders constituted 7.7% of all cases and included acanthosis nigricans [Figure - 8], infantile hemangiomas [Figure - 9], milia, Epstein pearls, lanugo hairs, toxic erythema of the new born, aphthous ulcers, physiological changes of the new born like desquamation, steroid rosacea, keloids, lipoma, morphea, collodion baby with polydactyly, congenital geographic tongue, and hemosiderosis. 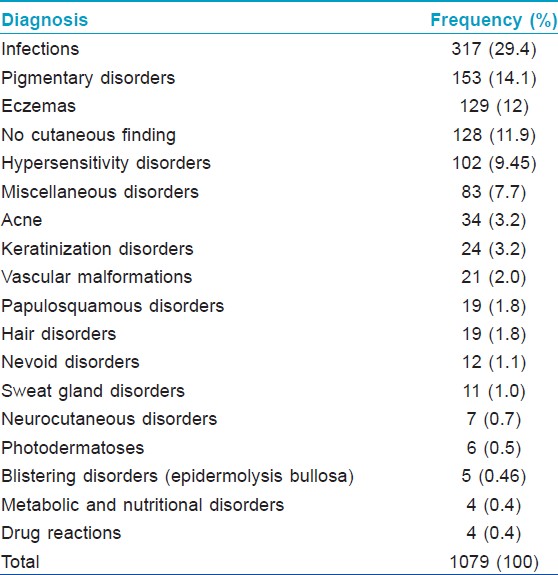 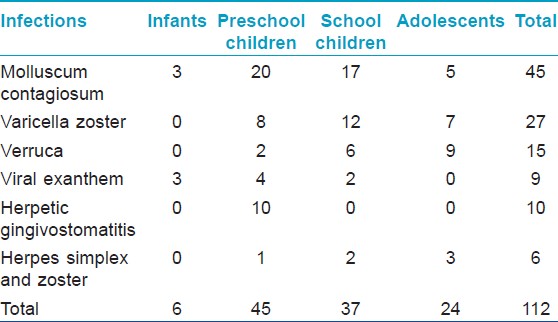 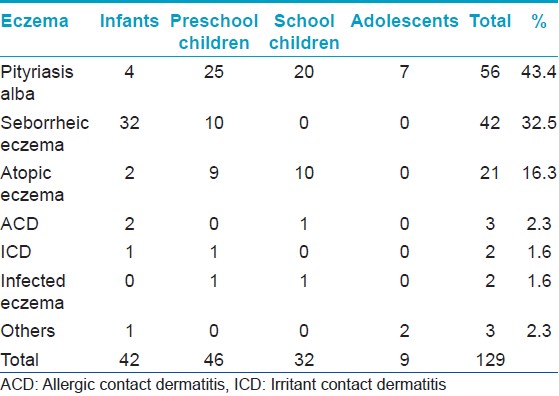 et al.[3] reported fungal infections to be more common. These differences among infective dermatoses can possibly be attributed to the regional climatic variations with cold and low humidity prevailing in Kashmir. The high prevalence of pigmentary disorders predominantly accounted by Mongolian spots (71.9%) has not been reported by many. Further genetic and epidemiological studies are awaited to explain its frequent occurrence. In our study, the eczema group accounted for 12% of all dermatoses and was most common in the preschool age children. In another study conducted in North India, eczemas were noted in only 5.2% of school children. [6] This indicates that eczema is commoner in Kashmir; this higher prevalence may be linked to genetic factors. The prevalence of nevoid disorders in our study was 1.1%. Earlier studies on the prevalence of pediatric dermatoses from Kashmir valley, that have not enrolled infants and preschool children, have reported this figure to be 0.4%. [7] The higher prevalence could be due to inclusion of children aged less than 6 years in our study. The lower proportion of acne which constituted 3.2% of all the cases is probably due our study being limited to the age group below 16 years. Seasonal and dietary variations could also account for this difference. Genetic disorders such as ichthyosis were frequently encountered in our study. The higher occurrence of these keratinization disorders in our population can be explained by the fact that our institute is a referral center. Moreover, the incidence of consanguineous marriage is high among the Muslim population of our region and may explain the higher prevalence of genodermatoses.

We conclude that skin disorders are common in children in the Kashmir valley with infections forming the largest group, followed by pigmentary disorders and eczemas.