Pattern of skin diseases among migrant construction workers in Mangalore

Background: With increasing industrialization, the construction industry provides employment to a large number of skilled and nonskilled workers, many of them migrant workers. Aim: This study was undertaken to provide epidemiological data regarding various dermatoses among migrant construction workers in India as currently there is a paucity of the same. Methods: One thousand construction workers, including 467 migrant laborers, were examined for various dermatoses. Results: Most (88%) workers were males and 51.17% were in their third decade. Infective and noninfective dermatoses were seen in 89.72% and 53.74% of laborers respectively. Among infective dermatoses, fungal infections were the most common (46.25%) ones, followed by bacterial infections (24.83%), scabies (8.56%) and viral infections (6.42%). Contact dermatitis to cement was seen in 12.48% of the laborers. Masons had a significantly higher incidence of contact dermatitis to cement, viral infections and scabies than helpers. Conclusions: The pattern of dermatoses is an expression of poverty, overcrowding and the occupational hazards of the construction industry.
Keywords: Contact dermatitis, Dermatoses, Migrant workers 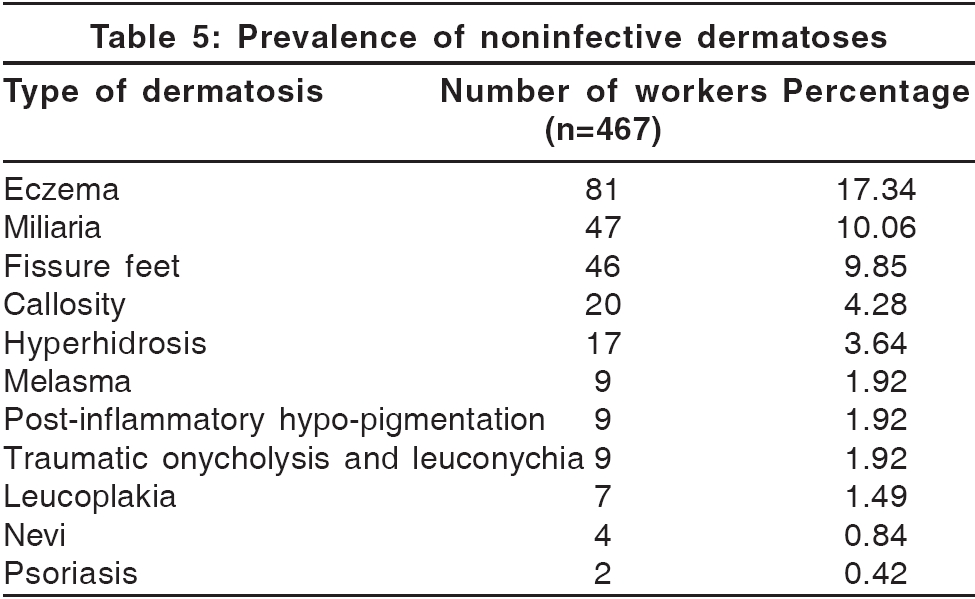 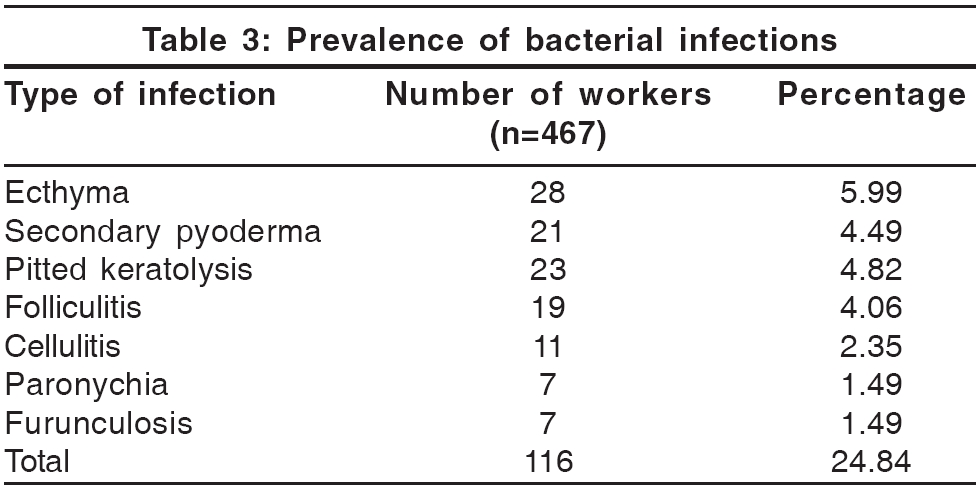 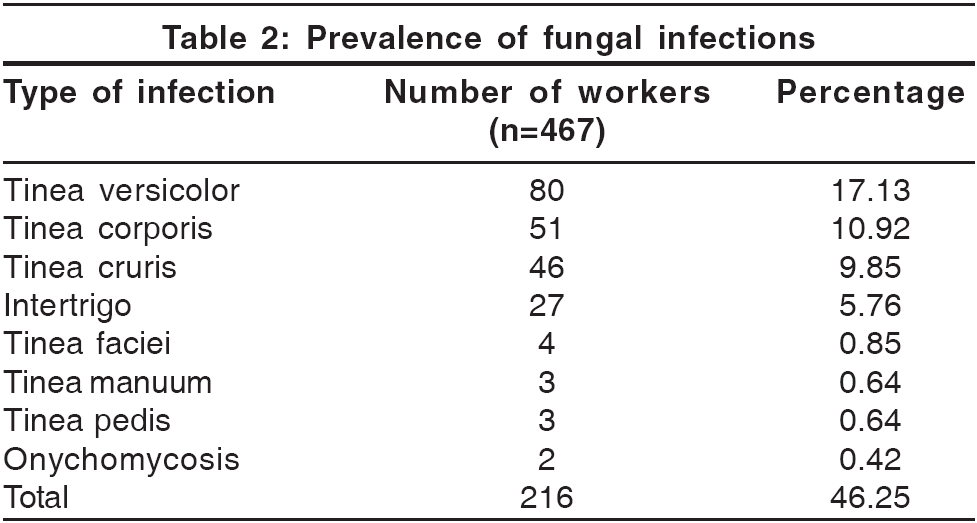 An occupational dermatosis is defined as ′a skin disease that would not have occurred if the patient had not been doing the work of that occupation.′ Evidences in favor of an occupational origin are:[1]

1. Working in contact with an agent known to have caused similar skin changes

2. Occurrence of similar dermatoses in fellow workers or those within the same occupation

4. Type and site of lesions consistent with information of exposure and similar to other cases

In an earlier study, the prevalence rate of occupational cement dermatitis among cement workers was 37 per 1000.[4] In India, cement has been reported as the most common cause of contact dermatitis.[5] In cement, water-soluble hexavalent chromate is the main allergen, the cobalt in cement acting as a sensitizer.

One thousand construction workers at five different construction sites in and around Mangalore were screened for dermatological complaints. After excluding the local laborers, 467 migrant laborers with various dermatoses were assessed. Details of the type of work and materials with which they came in contact were recorded. Based on this, the study group included the following categories: masons, helpers, painters, rod fitters, carpenters, electricians and supervisors. Masons were involved in skilled jobs like laying the bricks and paving and used cement as a basic ingredient in their work. Helpers were involved in unskilled jobs of mixing the cement, carrying it to construction sites, cleaning and helping masons.

Each worker was given a complete physical examination in a well-lit examination room at the construction site. The individual cases were diagnosed based on the clinical morphology of the lesions. Patients who required biopsy for confirmation of the diagnosis were referred to specialist referral hospitals. The diagnosis of fungal infection was supported by microscopical examination of potassium hydroxide skin scrapings in suspected cases. Special tests like patch tests and fungal cultures were not done due to financial constraints. Since the study was done in remote construction sites, not all the patients could come to the hospital for review. If the clinical diagnosis was in doubt, only a few workers were referred for a skin biopsy. Moreover, many laborers changed their site of work frequently. Hence, many of them could not be followed up for treatment.

Pyogenic bacterial infections of the skin were common [Table - 3] and included ecthyma (5.99%), secondary pyoderma (4.49%), pitted keratolysis (4.82%), folliculitis (4.06%), cellulitis (2.35%), paronychia (1.49%) and furunculosis (1.49%). Out of the two cases of leprosy diagnosed, one each belonged to the borderline lepromatous and borderline tuberculoid spectrum respectively. Chancroid was detected in two patients and lymphogranuloma venereum in one. Among viral infections [Table - 4], warts were the most common (3.64%), followed by varicella zoster infection (1.71%) and others. Four of the eight workers who had chickenpox were from the same construction site.

Comparison of the two largest groups, i.e., masons and helpers, showed a significantly higher prevalence of contact dermatitis to cement and scabies and viral infections among masons. No statistically significant difference was noted for other dermatoses.

The majority of our workers belonged to the third decade and males outnumbered females. The literacy rate was only 10.27%, which may be a contributory factor for poverty, ignorance and bad environmental hygiene.

Infections constituted the commonest dermatoses, particularly fungal infections, probably due to the hot and humid climate in coastal Mangalore. Trauma, increased hydration of skin and maceration provide a suitable environment for the development of dermatophytosis.[6] The high incidence of bacterial infections may be due to unhygienic working conditions at the construction site, the trauma sustained during work and environmental factors such as a hot and humid climate.[7] Scabies may be prevalent because of overcrowding and close contact,[8] as most migrant workers stayed at the construction site. Frequent trauma and close contact may have contributed to the occurrence of warts. An outbreak of chickenpox was detected amongst a family of masons at one construction site, with four cases occurring at the same site.

The high incidence of miliaria and hyperhidrosis may be attributable to environmental factors such as a hot and humid climate. Fissures of the feet may occur because of the dryness of skin, especially in workers who do not wear any protective footwear. Actinic dermatoses like polymorphous light eruption and actinic cheilitis may be attributed to exposure to sunlight without photoprotection. Callosity is a common disorder of keratinization found in manual workers.[10]

The pattern of dermatoses presented here is an expressive of poverty, ignorance, overcrowding, poor hygiene and exposure to common irritants and sensitizers in the construction industry. Hence, education of workers regarding occupational hazards, improvement in environmental hygiene and provision of cost-effective protective measures (such as clean clothes, adequate bathing facility, footwear and barrier creams) would help reduce morbidity among construction workers.