Background: Axillary osmidrosis is a common problem with a strong negative impact on the professional and social quality of life. Several options are available for its treatment. But there are no treatment guidelines. The objective of this study was to evaluate efficacy and safety of percutaneous ethanol injection for treatment of axillary osmidrosis.
Methods: A randomized, double-blind, placebo-controlled clinical trial to assess clinical efficacy and postoperative complications of percutaneous ethanol injection was performed among 60 patients (12–35 years of age) with axillary osmidrosis. The active agent used in the experimental group (n = 30) was sterile 90% ethanol and the placebo used in the control group (n = 30) was sterile normal saline administered in an identical syringe. The results of malodor elimination were graded by the patients as excellent, good, fair, and poor. All patients were followed-up for 10 months.
Results: Malodor elimination was graded as good by 15 (50%) patients treated with percutaneous ethanol injection. A significant difference in the improvement of axillary osmidrosis was found between the experimental and control groups (P < 0.001). The most common post-procedure complication was transient subjective skin stiffness in the experimental group, which regressed spontaneously. There were no serious permanent side effects.
Limitations: Relatively short duration of follow-up; and lack of histopathological evidence of destruction of the apocrine glands after treatment in most patients.
Conclusions: Percutaneous ethanol injection is an effective and safe treatment method for axillary osmidrosis and does not have permanent side effects.

Axillary osmidrosis is characterized by an excessive, unpleasant odor that originates from the apocrine glands in the axillary area. Axillary osmidrosis with and without hyperhidrosis is a common condition with significant impact on the quality of life of affected persons.[1],[2] The purpose of treatment is to destroy sweat glands with minimal effect on the appearance of axillary area.[3],[4] Many treatment modalities have been developed for axillary osmidrosis.[5] These are classified as surgical and nonsurgical. Surgical interventions include removal of axillary tissue using lasers; use of ultrasonic devices or endoscope; liposuction; and manual subcision.[3],[6],[7],[8],[9]

Surgical treatment in which the subcutaneous tissue including the apocrine glands is removed provides the best results. However, it carries a high risk of adverse effects, such as hemorrhage, hematoma, infection, pain, scarring and limitation of movement.[6],[8] For cosmetic reasons, minimally invasive procedures are preferred nowadays. Ethanol is a primary sclerosing agent considered as a therapeutic option in axillary osmidrosis.[10] Percutaneous ethanol injection is currently the first-choice treatment of cystic nodules relapsed after diagnostic evacuation. Moreover, it is an alternative treatment for patients with nodular lesions who have contraindications for surgery and for those who carry a high risk from surgery.[11]

A recent study suggested that percutaneous ethanol injection is effective in elimination of malodor in axillary osmidrosis.[10] But this study was not blinded and did not have a control group. Here we report the results of a randomized, double-blind, placebo-controlled trial for evaluating the efficacy and safety of percutaneous ethanol injection in the treatment of axillary osmidrosis.

Considering type I error (alpha) as 0.05, power as 80% and an expected difference of 30% in response rate between the groups, sample size was calculated as 30 in each group.

From April 2014 to April 2015, 60 patients (age range 12 to 35 years) with moderate to severe axillary osmidrosis (grade 3 or 4), according to the osmidrosis grading system,[13] were enrolled in the study. Exclusion criteria included pregnancy, breast feeding, previous axillary operation, major co-morbidities, treatment with botulinum toxin or radiosurgery during the previous four months and active infection of the axillae. The study protocol was approved by the institutional review board of Isfahan University of Medical Sciences. Written informed consent was obtained from all the participants. We recorded age and sex, age of onset of disease, and family history of the participants.

Participants were divided into two groups in a 1:1 ratio using random allocation software for parallel group randomized trials. The members of the study arm were injected percutaneously in the axillae with sterile 90% ethanol (Sina FarimanCo., Mashhad, Iran) and those in the placebo group with sterile normal saline (0.9% sodium chloride, PLC, Tehran, Iran). Both preparations were administered using identical 2.5 mL syringes.

Participants and the members of the dermatologic surgery team who injected the medication were unaware of the contents of the injection. Only one of the co-investigators, who generated the random allocation sequence and enrolled participants, was not blinded in the study.

All procedures were performed by the same surgical team. Patients were placed in supine position in the outpatient operating room, with their arm abducted to approximately 100°. Excessive abduction was avoided to prevent brachial plexus injury.[14],[15] To reduce uneven distribution of medication, a grid pattern consisting of 1 × 1 cm squares was drawn on both axillae preoperatively [Figure - 1]. This was followed by iodine starch test (Minor's test) to identify the preoperative sweating pattern and thereby to determine the surface area required for the operation.[16]

Lidocaine 2% (Pasteur Institute, Iran) diluted to 0.25% by mixing with normal saline was used for local anaesthesia. Thirty mL of this preparation was infiltrated subcutaneously in each axilla. The volume of injection was calculated based on the volume of the target tissue.[10] One milliliter of ethanol or placebo per 1 cm [3] of tissue was injected into the dermo-subdermal junction (superficial subcutaneous layer) using a 2.5 mL syringe and 30-G needle.

In the experimental group, sterile 90% ethanol was injected on the marked area. The injection was stopped when the content of the syringe was completely used up or when the patient complained of severe pain. In the control group, sterile normal saline (0.9% sodium chloride, PLC, Tehran, Iran) was injected on the marked area. The site was dressed with a thin gauze after injection and no bandage was used. Entire procedure, barring the contents of syringes was same in both groups.

Primary overall efficacy determined was a change in axillary malodor. The results of malodor elimination were graded by the patients as excellent, good, fair, and poor [17] [Table - 1]. Moderate osmidrosis was defined as malodor that could be identified by the patient but could not be detected by others at a distance of 1.5 m from the patient and accompanied by a little perspiration, and severe malodor and sweating could be detected easily from the body by others at a distance of 1.5 m during normal daily activity.[9]

The final results of clinical efficacy were assessed by the patients themselves, their family members and/or close friends and blinded investigators. Also we reviewed the clinical records and interviewed the patients individually during the follow-up visit or via telephone. All patients were followed up for ten months. The secondary outcome determined was satisfaction of patients after 10 months of treatment. Satisfaction of patients was assessed by a visual analogue scale (VAS) from 0 to 10 (0, no satisfaction; 10, best possible satisfaction).[18]

Preoperative and postoperative histopathological findings of axillary tissue were reviewed in two patients who gave consent to a histologic examination. The axillary specimen was obtained by 4-mm punch biopsy at the center of axilla.

Symptoms of all important side-effects and postoperative complications including ecchymosis, induration, haematoma or seroma, infection, skin necrosis, contracture, and nerve damage were explained to the patients before and during assessment and were evaluated at day one, seven, 30 and then monthly up to 6 months by one of blinded co-investigator. Information regarding recurrence of axillary osmidrosis was gathered.

Data analyses were performed using the Statistical Package for Social Sciences (SPSS©, Chicago, IL, USA) for Windows®, Version 16.0 for 30 participants in each group. A P value <0.05 was considered to be statistically significant.

Disease characteristics were compared between the two groups using Chi-square for categorical variables, Mann–Whitney U test for nonparametric ordinal variables, and independent-samples t-tests for parametric variables.

The changes from the baseline to the end of study period within each group were tested using Wilcoxon Signed Rank test for nonparametric variables. Analysis in subgroups (responder and nonresponder participants) was done using Chi-square test and independent-samples t-tests.

All 30 patients in each group completed the study and were considered for final analysis. All patients were followed up for 10 months. Mean age of patients was 27.9 ± 5.5 years in the experimental group and 27.0 ± 4.9 years in the control group. (P = 0.50). Other patient characteristics are summarized in [Table - 2]. 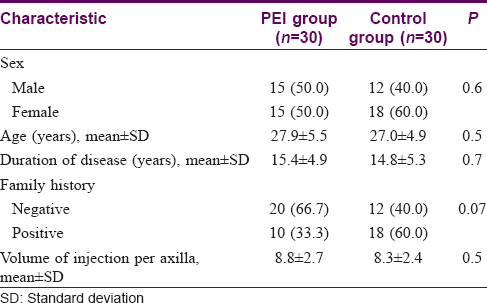 Table 2: Demographic characteristics of patients in the group of patients treated with percutaneous ethanol injection and the control group

Using Mann–Whitney U-test, a significant difference in the improvement of osmidrosis [Figure - 2] was found between the experimental and control groups (P < 0.001).

[Table - 3] provides a comparison of demographic characteristics of patients who responded well and those who did not in the experimental group. 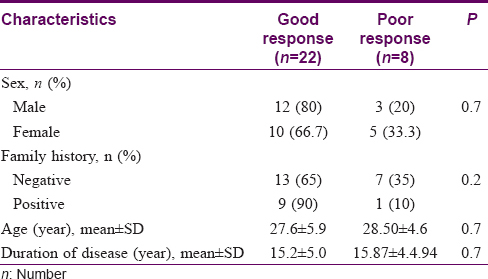 Approximately 75% of patients reported fair to good improvement in the experimental group [Figure - 3] and [Table - 4].

There were no serious permanent complications such as skin necrosis, infection, massive hematoma, or seroma. There were no side effects attributed to ethanol toxicity. The most common adverse effect was transient subjective skin stiffness in the experimental group. These side effects were mild, tolerable, and disappeared completely within 3–4 weeks after treatment. Details of complications in the treatment group are listed in [Table - 5].

Table 5: Frequency and duration of complications of percutaneous ethanol injection in 60 axillae

Ten (16.7%) and 12 (20%) of 60 axillae in the experimental group experienced ecchymosis [Figure - 4] and mild to moderate ulceration [Figure - 5] and received conservative management as treatment. Full recovery took approximately 35 days. Although the frequency of complications in the experimental group was significantly higher than that in the control group (P < 0.01), all complications were transient, could be controlled well and left no permanent sequelae.

Percutaneous ethanol injection is an effective and safe treatment for axillary osmidrosis without permanent complications. Sclerosing properties of ethanol have been known for many years. Percutaneous ethanol injection is an accepted method of treatment of hepatocellular carcinoma.[19] It is also used in the treatment of thyroid and parathyroid disease.[20],[21] The mechanism of action of ethanol is related to cellular dehydration, coagulation necrosis, thrombosis, and vascular occlusion.[22]

Instead of removing unwanted tissue surgically, ethanol causes destruction of sweat glands. Histopathological examination of thyroid nodules after percutaneous ethanol injection confirmed that ethanol injection was successful in destroying the tissue, resulted in atrophy or decrease in tissue volume, and thus in the elimination of hyperactivity.[24] Ethanol is injected into the subcutaneous layer near the interface of the dermis, where the apocrine and eccrine glands are located.[25] Apocrine glands are more widely distributed in the subcutaneous tissue than in dermis. Patients with axillary osmidrosis typically have many glandular tissues with thick layers.[9]

The histopathologic findings of our study indicate that percutaneous ethanol injection.reduces sweating by causing direct damage of apocrine glands. However, the existence of apocrine glands even after treatment indicates that recurrence is possible on long-term follow-up. This may necessitate additional treatment sessions.[26],[27]

Percutaneous ethanol injection is an effective alternative method for treatment of axillary osmidrosis. Complications are mild to moderate but transitory and self-limited. Our study is a primary study for evaluation of clinical efficacy and safety of percutaneous ethanol injection. Comparative studies are needed to confirm if the response is sustained for a long time.

There are several limitations to our study, including the relatively short duration of follow-up and the lack of histopathological evidence in all subjects confirming destruction of the apocrine glands after percutaneous ethanol injection. Another limitation of our study was lack of more objective methods for assessment of clinical efficacy.

We would like to acknowledge the patients for their participation in the study, and Mrs. Nekoei for her technical help during the study.