Background: Parthenium hysterophorus is the leading cause of phytogenic allergic contact dermatitis in India. The Indian Standard Series currently supplied by Systopic Laboratories Ltd and manufactured by Chemotechnique Diagnostics ® contains parthenolide as the only allergen representing plant allergens. Aim: The study was conducted to assess the performance of the Chemotechnique plant series (PL-1000), consisting of 14 allergens, in patients with clinically suspected occupational contact dermatitis to plant allergens. Methods: Ninety patients were patch tested with the Chemotechnique plant series from 2011 to 2013. Demographic details, clinical diagnosis and patch test results were recorded in the contact dermatitis clinic proforma. Results: Of 90 patients, 24 (26.7%) showed positive reactions to one or more allergens in the plant series. Positive patch tests were elicited most commonly by sesquiterpene lactone mix in 19 (78.6%) patients, followed by parthenolide in 14 (57.1%), Achillea millefolium in 10 (42.9%) and others in decreasing order. Conclusion: The plant allergen series prepared by Chemotechnique Diagnostics is possibly not optimal for diagnosing suspected allergic contact dermatitis to plants in north Indians. Sesquiterpene lactone mix should replace parthenolide as the plant allergen in the Indian Standard Series until relevant native plant extracts are commercially available for patch testing.
Keywords: Parthenium, parthenolide, sesquiterpene lactone mix

Parthenium hysterophorus, a member of the Compositae family represents the most frequent cause of plant-induced contact dermatitis in India. In a recent study evaluating the pattern of contact sensitivity in north India, parthenium (23.5%) was the most frequent sensitizer, followed by xanthium (15.8%) and sunflower (12.3%) among plants. [2] Another Indian study [3] revealed positive patch tests to parthenium in 14.5% out of 1000 contact dermatitis patients. Sesquiterpene lactones are the principal sensitizing allergens of the Compositae family and approximately 5000 such products with multiple structural groups have been characterized. Other compounds like epoxythymol-diesters and polyacetylenes may also play some role. [4] Multiple plant allergens employed (singly or as a mixture) to establish contact allergy to parthenium have demonstrated variable patch test results and none of them qualifies as a suitable screening agent. [1] We were unable to find any previous reports evaluating the utility of the plant series of allergens as prepared by Chemotechnique Diagnostics ® in confirming suspected allergic contact dermatitis to plants in India.

This study assessed the performance of the plant series of allergens prepared by Chemotechnique Diagnostics ® in the work up of patients with suspected contact dermatitis to plants during 2011-2013, at Postgraduate Institute of Medical Education and Research (PGIMER), Chandigarh. Patch test with the plant series of allergens was undertaken in patients occupationally engaged in handling plants or plant products (agriculturists, horticulturists, florists, gardeners, cattle handlers), clinically presenting with either eczema on the exposed body parts, the air-borne contact dermatitis pattern, or hand eczema, with a history correlating their disease or its exacerbation to their current occupation. The demographic and clinical profile was recorded in a predesigned proforma. The patients were tested with the plant series comprising 14 allergens [Table - 1] and reactions were read at 48 and 96 h according to the International Contact Dermatitis Research Group (ICDRG) criteria. [5] Patch test reactions graded as 1+ or more at 96 h were considered to be positive. 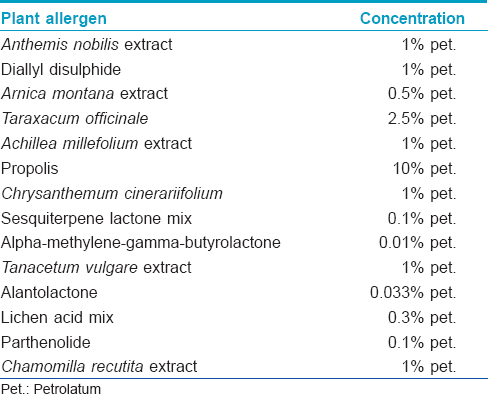 A total of 90 patients were patch tested with the plant series. Positive patch tests were elicited in 24 (26.7%) patients. The mean age of the patients was 49.7 years (range 33-61 years), with a male-to-female ratio of 2.5:1. The most common clinical presentation among the patch test positive patients was air-borne contact dermatitis pattern in 13 (54.2%), followed by atopic eczema-like distribution (without involvement of face) in 5 (20.8%), and hand eczema and localized dermatitis in 3 (12.5%) patients each.

The Compositae family is increasingly being recognized as the principal cause of plant contact dermatitis; [6] the major sensitizing allergens of these plants are sesquiterpene lactones. The alpha-methylene group exocyclic to the γ- butyrolactone ring is the reactive structure responsible for the allergenicity of the majority of sesquiterpene lactones. The frequencies of contact sensitization to different plants are variable and determined by the loco-regional distribution of plants, frequency and degree of exposure to these plants, antigenic potential of the chemicals contained in them and individual sensitivity. [7] Patch testing with allergens belonging to the suspected plant is the only means to establish the diagnosis of contact dermatitis to a particular species. Nandakishore et al. reported positive patch test reactions to Parthenium hysterophorus in 98.3% patients, Xanthium strumarium in 74.6%, Chrysanthemum coronarium in 22.8%, and Helianthus annuus in 11.1% patients with clinically diagnosed air-borne contact dermatitis to plants. [7] Besides these, some non-Compositae plants that caused contact sensitivity in the same study included Lantana camara in 36.5% cases, Nerium indicum in 35.8%, Calotropis procera in 13.9%, Azadirachta indica in 12.5% and Eucalyptus spp. in 5.5% cases. [7] The authors also demonstrated 74.2% cross-sensitivity between Parthenium and Xanthium, 21% between Parthenium and Chrysanthemum, and 11.3% between Parthenium and Helianthus, among Compositae plants. [7] In another study on suspected air-borne contact dermatitis to Compositae plants, 54 (68%) of 80 patients had positive patch test reactions to Compositae plant extracts; 45 of them reacted only to one of the four plants tested. Parthenium hysterophorus was the most common causative plant allergen in 51% patients, followed by Chrysanthemum morifolium in 23%, Dahlia pinnata in 9% and Tagetes indica in 4% cases. [8]

The objective of the present study was to determine if the commercially available plant allergens (prepared by Chemotechnique Diagnostics ® ) are useful in the evaluation of suspected occupational contact dermatitis to plants in north India. This in turn would eliminate the need for acquiring, processing and standardizing individual plant extracts and/or allergens. Our study demonstrated positive patch tests to only seven of the antigens in the plant series. This is expected as some of the plants having these allergens may not be prevalent in our region at all.

Besides sesquiterpene lactone mix and parthenolide, positive patch tests to other plant allergens in the present study could have possibly occurred due to cross-reactivity or poly-sensitivity as the majority of our patients had positive reactions to two or more allergens. As Achillea millefolium is found in Himachal Pradesh, Jammu and Kashmir and Uttarakhand regions, and most of our patients resided in these states, possible occupational exposure may explain the positive patch test reactions to this plant. Sensitization to Tanacetum vulgare may be related to its parthenolide content, thereby resulting in cross-reactivity. However, it grows in some parts of Kashmir, which may have led to primary sensitization in some of our patients. All patients with alantolactone positivity also reacted to sesquiterpene lactone mix, of which alantolactone is a constituent. Mono-sensitization to propolis in two of our cases could have been due to beekeeping, propolis being a resinous mixture produced by honeybees. Chamomilla recutita, a weak sensitizer native to Europe, is also found in Punjab, Jammu and Kashmir, and Uttar Pradesh. It shows cross-reactivity with chrysanthemum, which is an important ornamental plant in India.

The principal allergen in Parthenium hysterophorus is parthenin, which belongs to the pseudoguaianolide class of sesquiterpene lactones. The other allergens include ambrosin, hymenin, coronopilin, tetraneurin-A, hysterophorin, and dihydroisoparthenin. [13] Parthenin is not a component of the plant series and hence some cases of parthenium dermatitis may have false negative patch test results when tested with sesquiterpene lactone mix alone. This may be circumvented by using parthenium extract. A recent study from India demonstrated that parthenium extract alone results in a greater number of, and stronger positive reactions (86%) than parthenolide (46%). [14] Another study analyzing the common contact sensitizers in India using the European Standard Series found that sesquiterpene lactone mix is not an appropriate screening agent for parthenium sensitivity. [15] Thus it seems that parthenium extract obtained from Parthenium hysterophorus is the most appropriate allergen to detect parthenium sensitization and should be included as the plant antigen in the Indian Standard Series.

The plant allergen series prepared by Chemotechnique Diagnostics ® is possibly not optimal for the evaluation of suspected contact dermatitis to plants in north India. Parthenolide may not be a good screening agent for suspected contact dermatitis to Parthenium hysterophorous in the Indian Standard Series. Sesquiterpene lactone mix gives a higher rate of positive patch test reactions when compared with parthenolide but also has an inherent drawback of not including parthenin (pseudoguaianolide) as one of its constituents and may result in false negative results. It is recommended to perform patch tests with native plant extracts, if feasible, because of phytogeographical variations in allergen content.