Pilomatricoma: A tumor with hidden depths

Background: Pilomatricoma is a benign tumor of hair matrix differentiation and has been classically described as comprising of basaloid and shadow cells admixed with multinucleated giant cells and areas of calcification. However, there are a diverse range of histologic features this tumor displays that are often unrecognized. Aims: This study was undertaken to record the histopathologic features of pilomatricoma with an emphasis on the occurrence of other forms of differentiation. Methods: The study included all skin biopsy specimens over a 13-year period from 1995 to 2007 that had a histologic diagnosis of pilomatricoma. Hematoxylin and eosin-stained slides were reviewed. Results: This study included 21 cases of pilomatricoma. Supramatrical differentiation was seen in all cases and three-quarters of the cases showed matrical differentiation. Also observed in some of the cases were clear cell differentiation toward the outer root sheath, infundibular differentiation, calcification, ossification and secondary inflammation with a foreign body giant cell reaction. Epidermal induction in the form of a downward plate-like growth of the epidermis was seen in a few cases. Conclusion: Pilomatricoma, although considered a tumor of hair matrix differentiation, can show cellular evolution toward the other parts of the hair follicle, such as the outer and inner root sheaths, sebaceous and infundibular components and, therefore, can be considered a panfollicular neoplasm.
Keywords: Pilomatricoma, hair matrix, differentiation

Pilomatricoma is a common benign neoplasm, which is considered to differentiate toward hair follicular cells, particularly the cortex. [1] Typically, it is said to comprise of "basaloid, eosinophilic and shadow cells" with calcification. [2] Ackerman and coworkers elaborated on pilomatricoma extensively. [3] They describe pilomatricoma as a sac of epithelium that is infundibular above and matrical and supramatrical cells along the sides and below. The authors also mention that matrical cells of pilomatricoma not only cornify as shadow cells but also differentiate according to other counterparts of a normal hair follicle, e.g. toward inner sheath and infundibulum. These features are usually not emphasized and this study is an attempt to document the range of differentiation seen in this tumor. This study was undertaken to determine the histopathological features of pilomatricoma with an emphasis on the occurrence of nonmatrical forms of differentiation.

The study included all skin biopsy specimens received at the Department of Pathology over a 13-year period from July 1995 to July 2007, which were signed out as pilomatricoma. Hematoxylin and eosin-stained sections were reviewed. The features studied were matrical cells, supramatrical cells, shadow cells, isthmic epithelium, infundibular epithelium, sebocytes, apocrine cells, calcification, ossification, melanocytes, giant cell response and granulomas. Clinical data was obtained from the patient records.

Twenty-one pilomatricomas were seen in 20 patients. The age of the patients ranged from 6 years to 42 years. Most cases were seen in the 2 nd and 3 rd decade. A male preponderance (six female and 14 male patients) was noted. The arm and forearm were the most common sites involved, followed by neck, trunk, thigh, gluteal region and leg. One patient had multiple lesions (two in number). The size of the lesions ranged from 0.5 cm to 2 cm in greatest dimension. 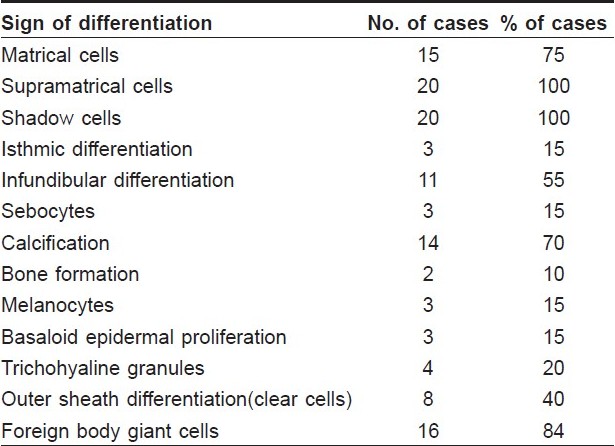 Basaloid epidermal proliferation in the form of a plate-like growth of the epidermis down to the dermis was noticed in three cases. Calcification and ossification were frequently seen. Foreign body reaction was common.

Pilomatricoma is a benign neoplasm, with differentiation toward the matrix of the hair follicle, first described in 1880 by Malherbe and Chenantais as a tumor of the sebaceous glands. [4] It is most frequently seen in the 1 st and 2 nd decade. The age range of patients in this study was consistent with that of published literature. [2] Although pilomatricomas in general have a slight female predominance, we noted a male preponderance. Head, upper extremity, neck, trunk and lower extremity are affected with decreasing frequency. [2] In an Indian study by Solanki et al., the arm was the most common site involved, concordant with the current study where the lesions were predominantly located on the upper extremity. [5] Moehlenbeck et al. found multiple lesions in up to 3.5% of the cases. [6]

Pilomatricoma, although considered a tumor of hair matrical differentiation, is now believed to be a complex panfollicular neoplasm, in that it can exhibit signs of differentiation of the entire follicle. Ackerman and coworkers have described not only shadow cells that represent an aberrant attempt at hair formation but also differentiation to other parts of a hair follicle, i.e. toward the inner sheath, as evidenced by the presence of trichohyaline granules, toward the infundibulum, as evidenced by the presence of keratohyaline granules and basket-woven orthokeratosis and sometimes toward the sebaceous and isthmic epithelium.

We found only one study of 39 cases by Costache that discusses these features in detail, and none from India. [7] [Table - 2] gives a comparison of our findings with that of Costache. The results are more or less concordant. We found a lower rate of infundibular differentiation. It is noteworthy that melanocytes were seen with a similar frequency in both studies. When abundant, these tumors have been termed melanocytic matricomas. Clear cells, a sign of outer root sheath differentiation, need to be distinguished from sebocytes, which not only have a fine, multivacuolated cytoplasm but also have scalloped nuclear outlines. The range of differentiation encountered is a reflection of the common embryologic origin of the folliculo-sebaceous-apocrine unit. 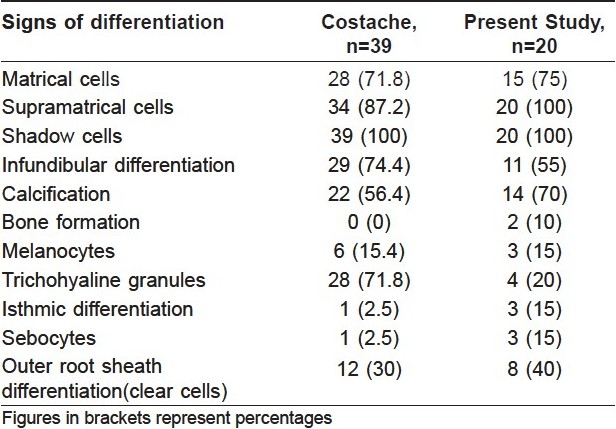 Table 2 :Comparison of the findings of in the current study with that of Costache

The reported incidence of calcification in pilomatricoma ranges from 69% to 85%, and osseous metaplasia has been described in 15% of the cases. [8] In this series, calcification was seen in 68% and ossification in 5%. Other secondary changes such as foreign body giant cell reaction, which is well documented in the literature, were common.

Another unusual feature that we incidentally noticed was basaloid proliferation of the epidermis overlying the neoplasm, forming a plate-like structure resembling follicular germinative cells. This phenomenon is often described in mesenchymal proliferations such as dermatofibroma, where the stroma induces the epidermis to behave like the surface ectoderm. [9] We do not know the reason for its occurrence in pilomatricomas, but speculate that it may be due to changes in the surrounding stroma.

To conclude, pilomatricoma, a tumor deemed to be of hair matrix differentiation, commonly shows cellular evolution toward other parts of the hair follicle such as the outer and inner root sheaths and sebaceous and infundibular components. These features are often not stressed in the literature. If one is not aware of this fascinating array of appearances, it is quite likely that the diagnosis may be missed, especially on small biopsies or needle aspirates.