Psoriasis is a multisystem, immune-mediated disorder characterized by inflammatory skin and joint manifestations.[1] Comorbidities associated with psoriasis include metabolic syndrome, diabetes mellitus, cardiovascular and cerebrovascular disease. This association is attributed primarily to the chronic inflammatory and oxidative stress contributed by pro inflammatory cytokines such as tumor necrosis factor-alpha.[2] Chronic T cell activation, increased cytokines and immune complex deposition have been reported to cause glomerular injury resulting in focal segmental glomerulosclerosis, IgA nephropathy and membranous glomerular nephropathy.[3] Primary membranous glomerulopathy may be associated with circulating autoantibodies against a podocyte transmembrane receptor (PLA2R) which can be isolated from the immune complexes deposited at the glomeruli. Association of membranous glomerular nephropathy, anti-PLA2R antibodies and psoriasis has been described rarely in the literature.[4] We came across two cases of psoriasis vulgaris with associated nephropathy who were found to have concurrent anti-PLA2R antibodies demonstrated on immunohistochemistry on renal biopsy. Management of their renal disease also resulted in remission of psoriasis.

Our first case, a 39-year-old man, known case of psoriasis vulgaris since last 3 years, presented with recent exacerbation of his skin disease with a PASI score of 18 [Figure - 1] and hypertension with blood pressure of 140/100 mm Hg, without any other comorbidity or relevant drug history for psoriasis. Investigations revealed a normal hemogram, elevated serum cholesterol (309 mg/dl), triglycerides (209 mg/dl), normal blood urea and serum creatinine, protein of 4+ on routine urine microscopy with granular casts and 24 h urinary protein of 5175 mg in an output of 2500 ml. Ultrasound scan revealed normal renal morphology. Renal biopsy revealed [Figure - 2] normally sized glomeruli and nonproliferative, stiff capillary loops. Periodic acid–Schiff-methenamine staining showed a thickened basement membrane along with spikes, but devoid of double contour appearance. Interstitial and vascular components were normal. Immunofluorescence revealed diffuse and globally distributed finely granular deposits with IgG (3+) and C3 (2+) along the capillary loops. Immunohistochemistry with PLA2R staining showed deposits along the same pattern. Based on the biochemistry, histopathology and immunohistochemistry, a diagnosis of PLA2R positive membranous glomerular nephropathy was made. Other investigations for secondary membranous glomerular nephropathy revealed normal complement levels (C3 and C4), negative rheumatoid factor, antinuclear factor, antidouble-stranded DNA antibody, hepatitis B antigen and hepatitis C antibody. He was managed with prednisolone 30 mg daily, tacrolimus 2 mg twice daily, amlodipine 10 mg twice daily and indapamide 1.5 mg once daily with monitoring for blood tacrolimus levels. His skin lesions regressed, with PASI decreasing to 8 at the end of 3 weeks and remitting in 3 months. However, there was incomplete response of his renal disease to treatment with proteinuria persisting. The patient has been followed up for 9 months thereafter without reappearance of skin lesions.

The second case, a 43-year-old normotensive man under evaluation for painless, pitting, pedal edema of both legs of 2 weeks duration, was found to have proteinuria of 7 g with urine output of 3500 ml in 24 h. His hemogram was normal, with raised serum cholesterol (362 mg/dl) and triglycerides (218 mg/dl). Renal biopsy and immunofluorescence findings revealed similar findings as case 1, with PLA2R staining positivity on immunohistochemistry. While undergoing evaluation for his renal disease, he developed multiple papulosquamous lesions, with the skin biopsy reported as consistent with psoriasis vulgaris, and on examination, he had a PASI of 10. He denied any past history of similar complaints, intake of medications or associated comorbidity apart from his present renal status. He was placed on emollients and topical steroids for psoriasis and on modified Ponticelli regime of alternating months of prednisolone 60 mg and oral cyclophosphamide 50 mg for his renal disease, following which the skin lesions regressed after 8 weeks.[5] However, his renal disease showed only partial remission and he is being followed up. He was also screened similar to the earlier case for secondary membranous glomerulopathy with negative results.

Psoriasis, a common skin disorder, is now increasingly being recognized as a harbinger of systemic inflammatory responses with several metabolic and subsequent organ-specific disorders. Renal involvement in psoriasis has been reported variably, although not as conclusively as involvement of other organs. Limited reports link psoriasis with specific renal disorders [Table - 1].[6],[7],[8],[9],[10],[11] It has been proposed that psoriatic nephropathy be considered a separate entity [12] with its association occurring independent of the traditional risk factors.[13] 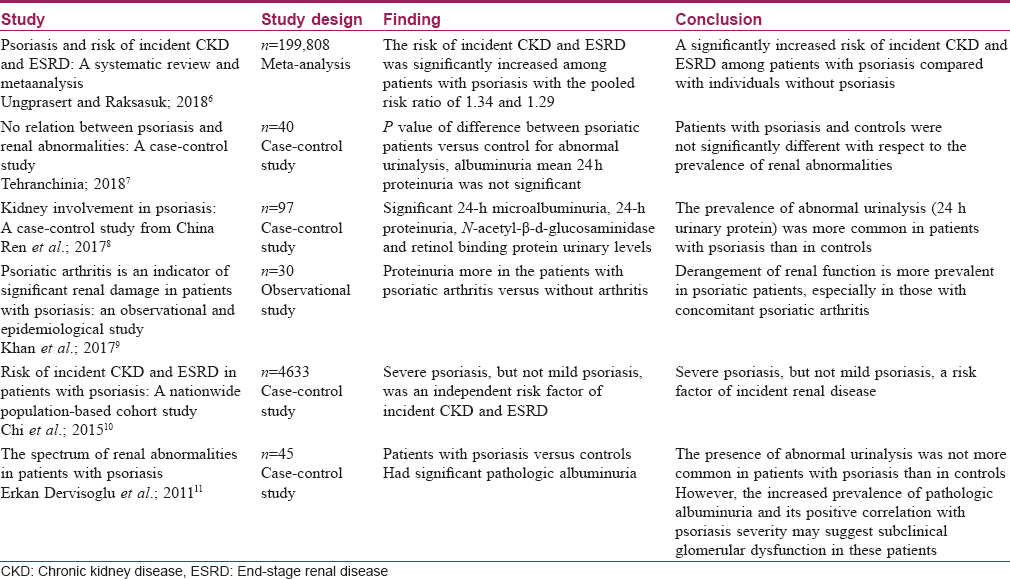 In both our cases, psoriasis was moderately severe (PASI score 10–18) and responded to immunosuppressive administered for their renal disease. Both cases were screened for other secondary causes of membranous glomerular nephropathy which were absent. Despite aggressive treatment, their renal disease responded only partially to therapy. Psoriasis in the guise of only skin involvement may clinically harbor complex inflammatory, as well as autoimmune process, resulting in organ damage evident only later during this disease. Authors postulate that antibodies to PLA2R may be a part of the generalized inflammatory phenomenon present in some cases of psoriasis and hence their occurrence may herald an ominous sign of renal involvement. Dermatologists may use positive anti-PLA2R antibody positivity to predict the clinical course, response to treatment and relapse rate in direct proportion to their titers, not only of membranous glomerular nephropathy but also the associated psoriasis. This, however, is yet to be conclusively proven as only rare reports of this association exist. A routine urine examination for proteins must be done in all psoriasis cases and PLA2R screening only in the high-risk cases or when specifically indicated.