Histopathology from nodular, psoriasiform, and atrophic lesion demonstrated non-caseating, well-defined, naked granulomas in dermis consistent with sarcoidosis [Figure - 3]. Decrease in number of melanocytes in the basal layer was evident in the biopsy from VV lesions. The patient was further investigated to look for any systemic involvement, and the relevant investigations have been tabulated [Table - 1]. All the blood investigations were within normal limits, except for raised serum angiotensin converting enzyme levels (96 U/L) and elevated blood sugar levels (fasting 208 mg/dl and postprandial 310 mg/dL). Thyroid function tests including anti-thyroglobulin antibody was within normal range. The chest X-ray revealed bilateral hilar lymphadenopathy with interstitial infiltrate predominantly at the bases, [Figure - 4] whereas the contrast-enhanced computed tomography of chest revealed multiple bilateral non-enhancing mediastinal lymph nodes with nodular lesions, suggestive of sarcoidosis. Pulmonary function tests showed mild restrictive pattern. Patient refused to undergo bronchoscopy. The abdominal ultrasound was normal. On the basis of clinical evaluation and investigations, a diagnosis of sarcoidosis (both cutaneous and pulmonary) was made, and the patient was started on oral prednisolone 40 mg daily and hydroxychloroquine 200 mg twice daily and was advised photo-protection. For IDDM, he was continued on insulin titrated to blood sugar. 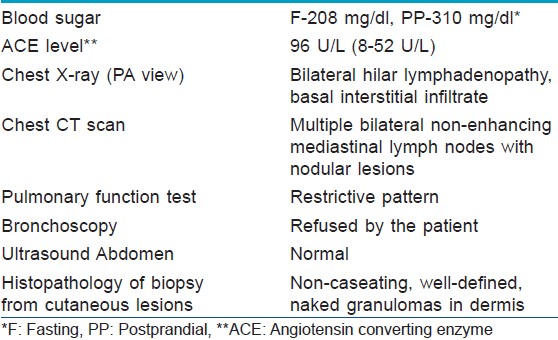 Table 1: Work-up of the patient pertaining to sarcoidosis

The etiopathogenesis of cutaneous sarcoidosis remains obscure. It is thought that continued exposure of a genetically susceptible individual to an antigenic stimulus through the epidermis produces a chronic granulomatous inflammation.

A literature review revealed that sarcoidosis associated with autoimmune diseases was reported by several authors. Co-existence of sarcoidosis with autoimmune diseases like autoimmune thyroiditis, autoimmune hemolytic anemia, Sjogren′s syndrome, idiopathic thrombocytopenic purpura, polyglandular autoimmune syndrome type III, insulin-dependent diabetes mellitus, celiac disease, vitiligo, pernicious anemia, Addison′s disease, Sjogren′s syndrome are now being increasingly reported. Such clinical cases reported support the concept of an underlying common genetic and immunopathogenic theory linking sarcoidosis to other autoimmune phenomena rather than just an accidental correlation. Considerable research has been conducted exploring the immunology of sarcoidosis. The prevailing hypothesis is that sarcoidosis is a unique cell-mediated type of autoimmune process. [1] Such a theory can link sarcoidosis to other autoimmune phenomenon existing in the same patient. The association of type 1 IDDM with both pulmonary and cutaneous sarcoidosis is uncommonly reported. Ours is the case with this rare association along with vitiligo vulgaris.

Another interesting point in our case was the strict localization of cutaneous sarcoidosis to lesions of VV. Strict anatomical co-localization of psoriasis and lichen planus on lesions of VV have been reported in literature with hypothesis suggested by the authors. [6],[7],[8],[9],[10] Anstey et al and Sardana et al suggested that photodamage within the vitiliginous skin may alter the expression of antigens identified by infiltrating T cells in lichen planus. [9],[10] Julian et al proposed that some cellular injury in vitiliginous skin might lead to immune mechanisms causing Koebner′s phenomenon. [7] Young et al reported a case of concurrent lichen planus and sarcoidosis in the auditory canal, which was explained as Koebner′s phenomenon. [11]

In conclusion, we present this case for the rare clustering of autoimmune diseases in the form of IDDM, VV and sarcoidosis with both pulmonary and cutaneous involvement. To the best of our knowledge, this is the second case report of the co-existence of cutaneous sarcoidosis with IDDM. It is, therefore, imperative to take cognizance of cutaneous and/or systemic sarcoidosis in type 1 diabetes since this autoimmune endocrine disease is one of the most frequent. Furthermore, the rare picture of polymorphic, cutaneous sarcoidosis confined to photo-exposed lesions of vitiligo is illustrated, which could be due to the immunological mechanisms resulting from the complex interplay of UV light and inflammation in vitiliginous skin. This aspect, however, needs to be explored further.