Since the initial description by Chaiken et al., drug reaction with eosinophilia and systemic symptoms (DRESS) has remained an enigma with its variable clinical features, close resemblance to infective, autoimmune and neoplastic diseases and unpredictable disease course.[1] Lack of a reliable diagnostic criteria or a laboratory test makes it a therapeutic challenge. One unique feature of DRESS is the waxing and waning course of reaction pattern noted in some affected patients even after withdrawal of the offending drug and administration of systemic steroids.[2],[3],[4] DRESS shows a spectrum of manifestations ranging from mild cutaneous rash to severe and life-threatening forms with major organ involvement or organ failure. No standard guidelines are available for the management of DRESS. The French Society of Dermatology has recommended a therapeutic guideline for DRESS based on internal organ involvement, organ failure and evidence of herpes virus reactivation.[5] We believe information regarding the predictors of internal organ involvement and organ failure in DRESS may help to improve the management of the affected by early identification of those individuals at risk for severe DRESS. Allopurinol and minocycline, female sex, advanced age, facial erythema, high eosinophil count, atypical lymphocytes in peripheral smear and reactivation of human herpesvirus 6 and cytomegalovirus were considered bad prognostic factors in earlier studies.[2],[6],[7],[8],[9],[10],[11] Previous authors have also identified certain histological features such as dense dermal inflammatory infiltrate, tissue eosinophilia and interface dermatitis with or without keratinocyte necrosis as poor prognostic factors in DRESS. Presence of apoptotic keratinocytes in histology was documented to be an indicator of DRESS-induced liver injury.[12],[13] In this setting, we carried out a study among 100 DRESS patients who attended the Dermatology department of our tertiary care institution during a period of 70 months from 1st January 2011 and who required inpatient care to determine the predictors of disease severity in DRESS.

An analytical cross-sectional study was conducted among 100 drug reactions with eosinophilia and systemic symptoms patients who attended the dermatology outpatient department of the Government Medical College, Kozhikode from 1st January 2011 and who required inpatient care. All cases of definite or probable DRESS diagnosed as per the RegiSCAR DRESS validation scoring system proposed by Kardaun et al. were included in the study after obtaining ethical clearance from the institutional ethics committee and a written informed consent from individual study participants (or guardians in case of children below 18 years).[14],[15]

Exclusion criteria: Drug reactions not satisfying the criteria to be considered as definite or probable drug reaction with eosinophilia and systemic symptoms as per the RegiSCAR validation scoring system were excluded from the study. Patients with DRESS who were not evaluated in the dermatology department and those who did not receive inpatient care in our institution were also excluded from the study.

A preset proforma was used to collect data regarding age, sex and clinical profile of the affected patients. Facial erythema and edema and internal organ involvement, whenever present, were carefully documented in each case. Laboratory investigations including complete hemogram, absolute eosinophil count, liver function (during hospital stay, absolute eosinophil count and liver function tests were repeated once in five days), renal function tests and peripheral smear report were carefully noted.

The data was entered in Microsoft excel and analyzed with SPSS Inc IBM company version 16. The association of age, sex, facial erythema and edema, absolute eosinophil count and atypical lymphocytes in peripheral smear with disease severity in DRESS was assessed using chi-square test. A P value less than 0.05 was considered significant. Analysis of variance with post-hoc test – Bonferroni -- was done wherever possible for multiple comparison and interclass variations. PLUM (polytomous universal model) ordinal regression was used to identify the predictors of disease severity in DRESS. Odds ratio and 95% confidence intervals were assessed.

During the study period of 70 months, we made a diagnosis of probable adverse drug reactions as per the World Health Organization's causality assessment in 272 inpatients.[16] DRESS contributed to 36.8% of the total adverse drug reactions (100/272). Among the 100 patients, 42 were categorized as definite DRESS (42%) and 58 (58%) were probable DRESS as per the RegiSCAR DRESS validation scoring system. Fifty-six were females and the male-to-female ratio was 0.8:1. One female patient had human immunodeficiency virus (HIV) infection and developed DRESS to cotrimoxazole initiated for prophylaxis against Pneumocystis jirovecii pneumonia. There was a single case of connective tissue disease (rheumatoid arthritis) in the study group who developed drug reaction with eosinophilia and systemic symptoms to salazopyrin.

Age of the affected ranged from 2 to 78 years. Mean age of the affected was 38.1 years. Nineteen drugs were identified as producing DRESS [Table - 1]. The most common class of drugs precipitating DRESS was aniconvulsants (in 67 patients, 67%) followed by antibiotics [on 17 occasions (17%) – penicillins 8, cephalosporins, azithromycin and cotrimoxazole 3 each]. The most common drug precipitating DRESS was phenytoin (41 patients, 41%) followed by carbamazepine (11 cases, 11%).

Table 1: Age and sex profile of the study group

The latent period between the drug intake and the onset of symptoms varied from 72 hours to 120 days with an average of 25.3 days [Table - 2]. In one instance of carbamazepine-induced DRESS, the patient manifested the adverse reaction 72 hours after starting the drug; the patient had taken carbamazepine for seizure disorder without any adverse events which he stopped on his own 3 months later. On restarting the drug for seizure recurrence 2 months later, he manifested features of DRESS within 72 hours. Three of the hundred patients manifested a long latent period of 120 days and the offending drugs were carbamazepine, isoniazid and divalproex sodium. Carbamazepine-induced DRESS patient had hyperbilirubinemia with elevated liver transaminases and had a severity score of two while the other two had no internal organ involvement. 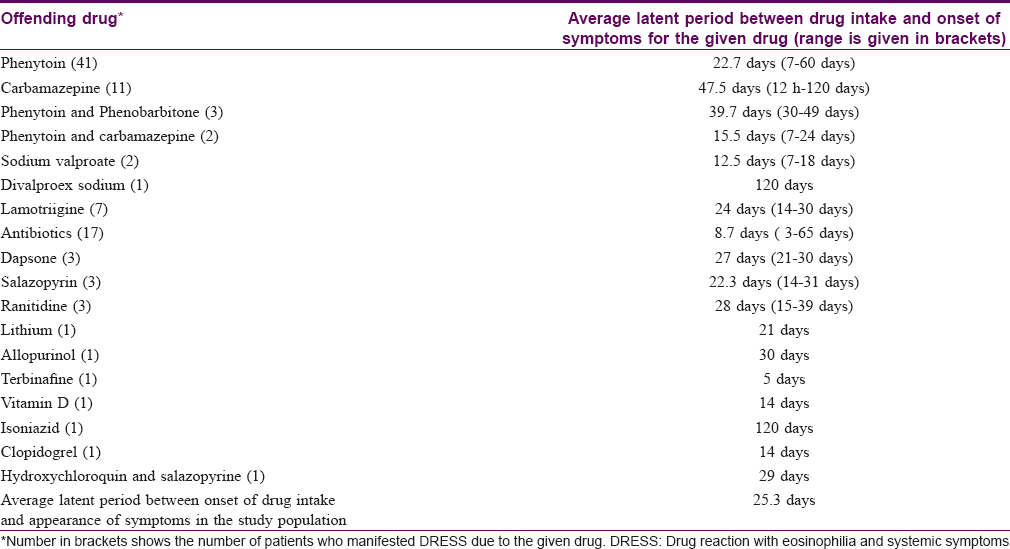 Table 2: Time interval between onset of drug intake and the appearance of symptoms in DRESS 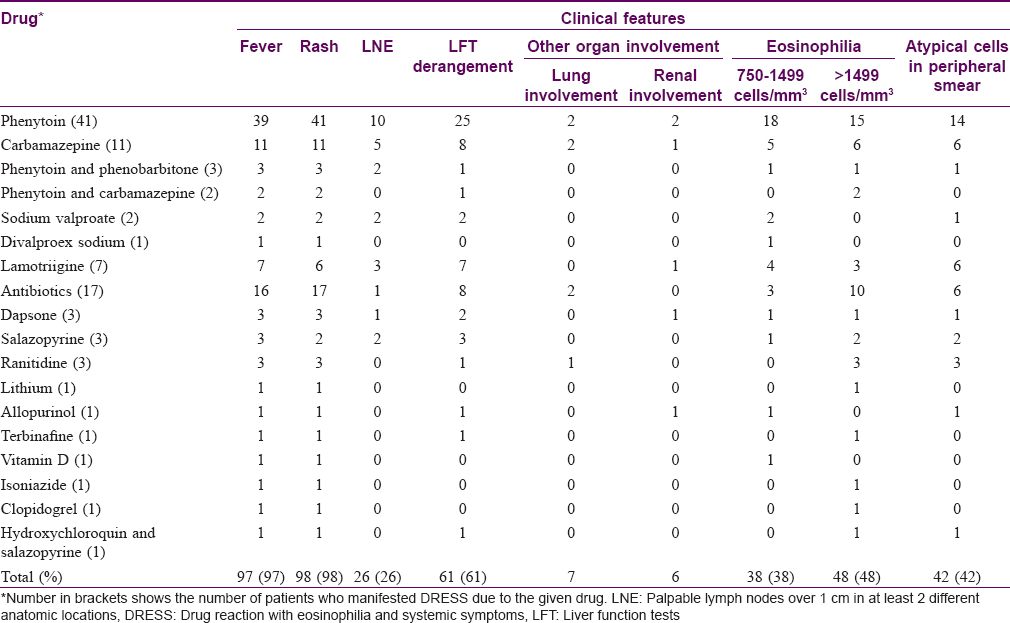 Table 3: Clinical features and laboratory parameters in patients with DRESS 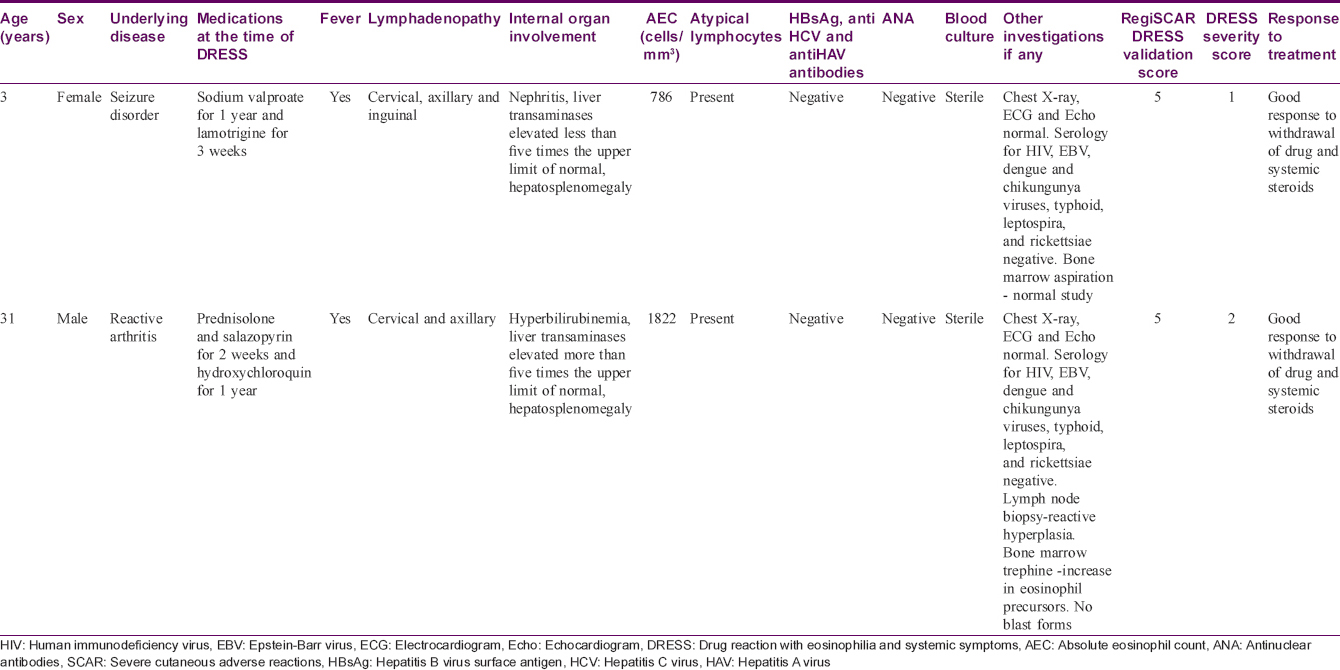 Mucosae were spared in nine. Forty-five of the ninety-one patients (49.5%) with mucosal involvement had nonsevere lesions limited to the scaling of lips [Table - 5]. 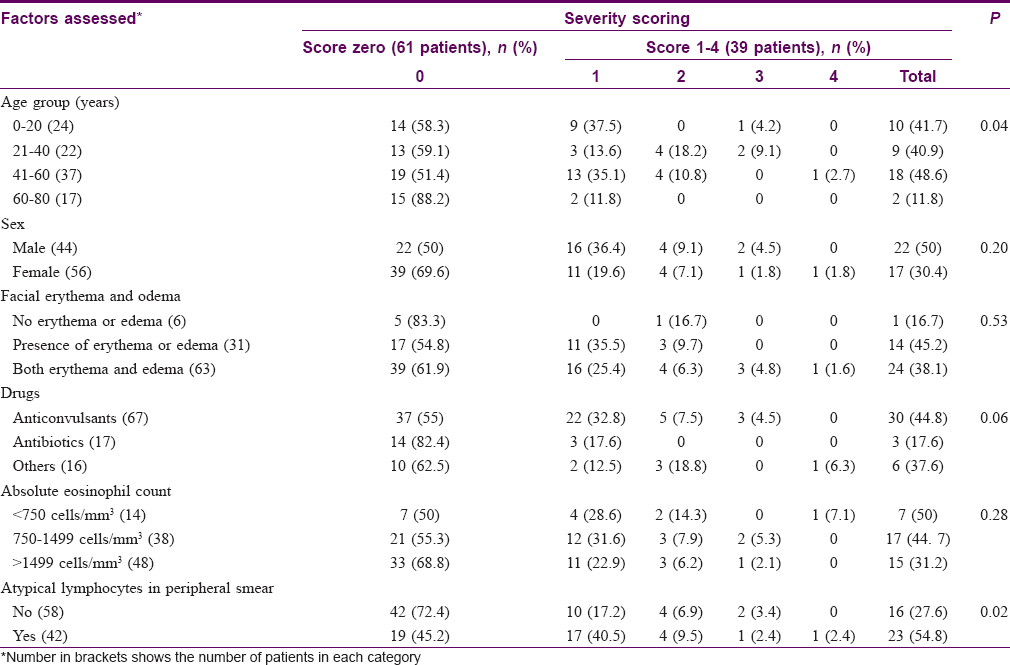 To study the predictors of disease severity in DRESS and for doing away with the effects of confounding factors, analysis with PLUM ordinal regression was done. The model had a significant fit (P = 0.004) and could explain up to 23.1% of the variation in the outcome (Nagelkerke Pseudo R[2]= 0.231).

Presence of atypical cells in peripheral smear was a significant predictor of disease severity in DRESS. Patients without atypical lymphocytes had 62% less odds of severe DRESS [P = 0.03; odds ratio = 0.38 (0.15–0.92)] as opposed to those with the finding. The results of regression analyses are charted in [Table - 7].

On running analysis of variance and multiple comparison with post hoc tests (Bonferroni alpha), wherever possible, significant interclass variation was found with the presence of atypical lymphocytes (F = 4.27; P = 0.04).

Mean age of the participants in our study was similar to the findings of Cacoub et al. but lower than that described in certain other studies.[11],[18] The male-to-female ratio of 0.8:1 noted by us was comparable to the previous reports.[6]

The average latent period between the onset of drug intake and appearance of symptoms documented by us were similar to figures as reported earlier.[11],[18] Though rare, a latent period of 120 days noted in three cases in this study was reported earlier too in other studies, especially in DRESS induced by carbamazepine, allopurinol, lamotrigine and isoniazid.[19],[20],[21],[22] Matta et al. has reported a case of carbamazepine-induced DRESS that appeared 239 days after starting the offending drug and manifested severe hepatic involvement.[19] A similar finding was recorded in the carbamazepine-induced DRESS in our study; however, the other two cases with a prolonged incubation period of 120 days manifested less severe DRESS. We did not come across any previous report of latent period of up to 120 days in divalproex sodium-induced DRESS. The rapid onset of symptoms on second exposure to the same drug noted in one of our patients has been reported previously.[2],[7],[9] Lack of symptoms on first exposure could be attributed to the withdrawal of the drug before development of adequate sensitization for manifestation of symptoms. A shorter latent period between onset of drug intake and appearance of symptoms noted for antibiotic-induced DRESS [Table - 2] could also be due to prior exposure to the same or related drugs.

Literature states that patients receiving prednisolone at a dose of 10 mg or more per day along with another immunosuppressive agent and HIV infected are more likely to manifest DRESS without rash.[23] One of the two patients without rash in our study was receiving prednisolone 10 mg along with hydroxychloroquin (which is an immunomodulator) while he developed rashless DRESS due to salazopyrin [Table - 4].[17] Co-administration of prednisolone and hydroxychloroquin might have played a role in nonmanifestation of rash. The second patient was a 3-year-old child, however, why she developed DRESS without rash remains unclear.[8] Interestingly, the lone HIV positive patient in this study developed rash. She was not on highly active antiretroviral therapy and developed DRESS to cotrimoxazole offered as prophylaxis against Pneumocystis jirovecii pneumonia.

Contrary to the previous observations that underlying HIV infection and collagen vascular diseases place a patient at greater risk for severe drug reaction, both patients suffering from these diseases in the study group had a severity score of zero.[2] However, we are unable to arrive at any definite conclusions because the number was negligible.

In contrast to previous reports, erythema multiforme type rash was not associated with internal organ involvement and severe DRESS in the present study.[12] However, we are unable to arrive at any definite conclusion because only one out of the 100 cases (1%) in our study manifested erythema multiforme lesions.

Unlike previous reports in many studies, facial erythema and edema were not associated with disease severity in DRESS in this study.[7],[10]

Elevated absolute eosinophil count was not identified as a predictor of severe DRESS in the current study. Earlier studies have reported conflicting results on the effect of eosinophilia on the severity of DRESS.[7],[12],[24]

The discrepancies noted between our study and previous studies could be partly attributed to the difference in population characteristics of study participants as none of the previous studies are carried out in this country. Another reason could be the retrospective nature of most previous studies.[10],[11],[12],[18],[19],[20],[21],[22] The few prospective studies that are available are of small sample size.[25]

Presence of atypical lymphocytes in peripheral smear serving as a predictor of disease severity in DRESS in the present study was consistent with our earlier observations.[8],[13]

The main limitations of the present study were our inability to evaluate the role of HLA association and herpes virus reactivation (due to financial constraints) which are recognized as important factors determining the severity of DRESS.[26],[27],[28] The role of histological features as predictors of bad prognosis was not evaluated in this study. Another major drawback was that the current study was neither designed to evaluate mortality caused by DRESS nor was it designed to follow-up the patients to determine the response to treatment and delayed autoimmune complications of DRESS and their predictors.

DRESS is a complex drug reaction which poses a significant diagnostic challenge. The predictors of disease severity in DRESS identified in the current study were the presence of atypical lymphocytes in peripheral smear and age of the affected patients. Further studies with a large sample size in different population groups are needed to confirm or refute our findings which may help us identify the warning signs in DRESS.

We are grateful to all the faculty and postgraduates who were part of the department during the study period for their invaluable help in conducting this study.