Predictors of serological cure after treatment in patients with early syphilis: A retrospective observational study in Thailand

The Centers for Disease Control and Prevention and Thai National Guidelines for syphilis recommend that a nontreponemal test be performed to evaluate the serological response at 3, 6 and 12 months after treatment for early syphilis.[1],[2] In general, patients with nontreponemal titers that decline 4-fold or more within 12 months of treatment are regarded as having a serological cure, whereas those patients with either a <4-fold decrease or increase without reinfection are considered to be in a serofast state.[1] In clinical practice, some patients experience a slow rate of decrease in their serological titers and scarcely achieve a negative titer even with proper treatment.[3],[4],[5],[6] The purpose of this study was to evaluate the prevalence and predicting factors of serological cures after treatment in early syphilis patients.

This was a retrospective review of the medical records of patients diagnosed with early syphilis at a tertiary hospital between January 2011 and December 2015. The study was approved by Institutional Review Boards of the Bamrasnaradura Infectious Diseases Institute, Nonthaburi, and the Faculty of Medicine, Mahidol University, Bangkok, Thailand.

The stages of syphilis were based on the sexually transmitted diseases treatment guidelines of 2015 from the Centers for Disease Control and the Thai National Guidelines.[1],[2] Early syphilis in this study included the primary, secondary and early latent stages of syphilis with <1 year of infection. Primary syphilis presents as genital ulcers (chancre) with or without regional lymphadenopathy, whereas secondary syphilis is characterized by mucocutaneous eruptions with or without generalized lymphadenopathy.

A serological cure is defined as occurring when there is more than a 4-fold decrease in a nontreponemal titer, whereas patients with a ≥4-fold increase are considered as having possible treatment failure or reinfection. Nontreponemal titers that neither increase nor decrease 4-fold after treatment are referred to as being in a serofast state, and seroreversion is defined as occurring when there is a negative test within 12 months of treatment.[7]

The following demographic data were collected: gender, age, sexual orientation, syphilis stage, HIV status, CD4 cell count, laboratory investigations, including Venereal Disease Research Laboratory test titer (B BBL Venereal Disease Research Laboratory antigen test, Becton Dickinson), and Treponema pallidum hemagglutination titer; treatment regimens; and complications. The serial follow-ups of the Venereal Disease Research Laboratory titers at 3, 6, 9 and 12 months were noted. The titers of the period since the onset of symptoms (in other words, the duration between first having signs or symptoms of syphilis, and receiving treatment), as well as any earlier histories of syphilitic infection and treatments before 2011 revealed in the patients' self-reports were also collected for analysis. The treatment regimens prescribed by physicians included intramuscular injections of benzathine penicillin G (2.4 million units, administered either as a one-off dose or as three-weekly doses), oral doxycycline (100 mg twice daily for 14 days) or intravenous ceftriaxone (1 g daily for 10–14 days).

People who had previously achieved a serological cure but subsequently had recurring signs or symptoms of early syphilis and had at least a 4-fold increase in a nontreponemal test titer were considered to be reinfected. All patients who fulfilled the diagnostic criteria of early syphilis used in this study were included. Any missing results of Venereal Disease Research Laboratory tests conducted during the follow-up period and all data from reinfection episodes were excluded from the analysis.

A Chi-square test was used to compare differences in the categorical data, and an independent t-test was used for continuous variables. A P value of <0.05 was considered statistically significant. The odds ratio with 95% confidence interval was also calculated for each relevant variable. All analyses were performed using IBM SPSS Statistics for Windows, version 22.0 (IBM Corp., Armonk, NY, USA).

Demographic data and prevalence of serological cure and serofast state

Of the 375 early syphilis cases reviewed, 179 patients had complete data and were therefore included [Figure - 1]. Those patients had a mean age of 31.9 years, with 174 (97.2%) being male; 125 (70%) of the 179 cases were HIV patients, of which 115 (64.1%) were on highly active antiretroviral therapy. In the case of the 174 men, 160 (92%) were men who have sex with men. Most of the patients, 159 (89%), were in the secondary stage of syphilis. A history of syphilitic infection was found in 34 (18.9%) cases. There were no cases of concurrent sexually transmitted infections, other than HIV. Benzathine penicillin G was used to treat 153 (85.5%) patients, and this was followed by doxycycline for 18 (10%) and ceftriaxone for 8 (4.5%) patients [Figure - 1]. Of the 153 patients on benzathine penicillin G treatment, 68 (44.4%) received a single dose while 85 (55.6%) had three doses of benzathine penicillin G weekly. Compliance with the treatment was evaluated, and it revealed 100% adherence. The baseline demographic data and clinical presentations of the two benzathine penicillin G groups were not significantly different, except that a higher proportion of the patients given three-weekly doses of benzathine penicillin G was HIV-infected than those receiving a single dose (83.5 vs 55.9%, with P < 0.001).

By 6 months after treatment, 139 (77.7%, with 95% confidence interval 71.3–83.4%) patients had achieved a serological cure. That figure increased to 174 (98%, with 95% confidence interval 94.8–99.4%) patients who had achieved a serological cure by 12 months after therapy, with the remaining five patients (2%, with 95% confidence interval 0.6%–5.2%) in a serofast state [Table - 1]. All five serofast patients had been treated with benzathine penicillin G. Four of them had initially been diagnosed as having secondary syphilis due to the presence of a maculopapular rash without other causes; their rashes completely resolved after treatment. Because those five patients had not achieved a serological cure within 12 months of the initial treatment, neurosyphilis was investigated; however, no signs or symptoms of neurosyphilis were detected. In the case of two serofast patients with Venereal Disease Research Laboratory serum titers >1:32, cerebrospinal fluid examinations were performed; they revealed normal results for the cerebrospinal fluid cell count and protein and sugar levels, as well as negative cerebrospinal fluid Venereal Disease Research Laboratory. Three patients received an additional treatment of weekly, intramuscular benzathine penicillin G (2.4 million units) for 3 weeks; they demonstrated a gradual decrease in their titers.

Of the 174 patients who had achieved a serological cure at some point during the 12-month follow-up period, reinfection was found in 32 (18.4%, with 95% CI 13.3%–24.8%) patients; they presented with recurring signs or symptoms, and with a >4-fold increase in titer from their last serological test result. All of them reported having had unprotected sexual intercourse between their last syphilis treatment and the recurring symptoms or signs.

Serological cure and stage of syphilis 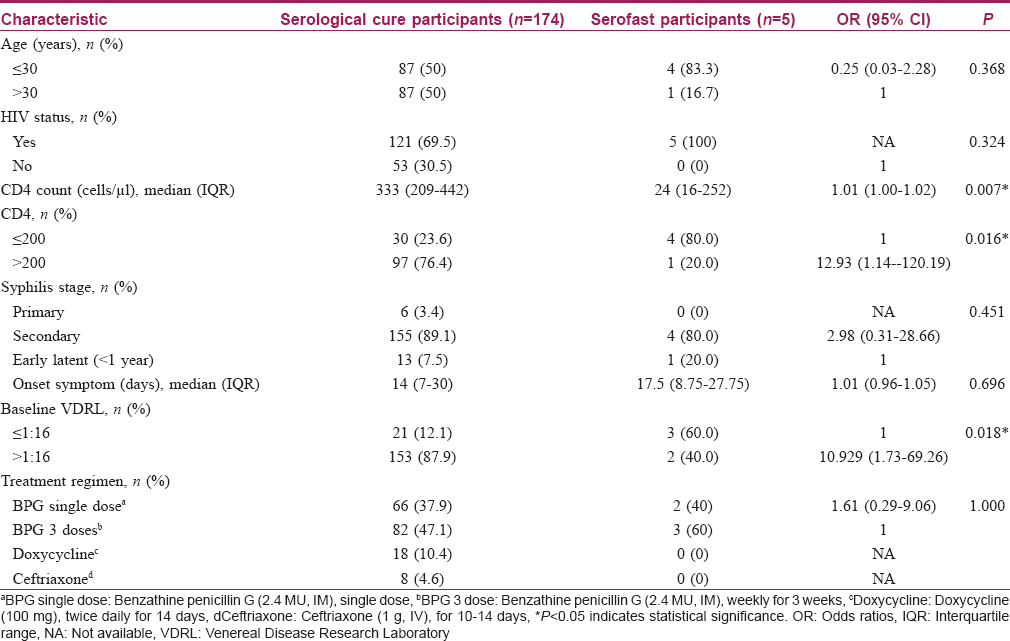 Table 2: Bivariate analysis of characteristics associated with serological cure in patients with early syphilis at 12 months after treatment

Prevalence and factors of seroreversion

Of the 179 patients, 7 (3.9%) had achieved seroreversion as a negative Venereal Disease Research Laboratory within 6 months of the treatment [Table - 3], and the figure increased to 22 (12.3%) within 12 months of the treatment. The median Venereal Disease Research Laboratory titer for the 152 patients who did not have seroreversion was 1:2 (range, NR–1:32) at 12 months after treatment. The proportion of patients who had seroreversion at 12 months was highest (13.2%; 21/159) for patients with secondary syphilis, and lowest (0%; 0/14) among those with early latent syphilis.

Table 3: Cumulative proportion of patients with seroreversion (negative Venereal Disease Research Laboratory) at 12 months after treatment, according to stage of infection and time after therapy

An earlier study found that 4.3% early syphilis patients presented a serofast state at 12 months after treatment; the current study demonstrated that a slightly lower proportion, 2% patients with early syphilis were in the serofast state at 12 months.[9] Another study also reported that age, gender, stage of infection, lower baseline titers, treatment regimen, cellular immune suppression and disorders, Treponema pallidum occult infection and the subtypes of the Treponema pallidum repeat gene were associated with the serofast state; however, the associations of baseline Venereal Disease Research Laboratory titers and CD4 cell counts remained unclear, and further studies were recommended by the author's of that study.[10],[11]

The management of patients in a serofast state is uncertain. Because those patients in the present study had not achieved a serological cure by 12 months after treatment, neurosyphilis needed to be excluded. On the basis of a study recommendation that a cerebrospinal fluid examination be conducted on asymptomatic HIV-infected patients with a titer >1:32, an examination was performed on the two serofast patients in the current study who had baseline Venereal Disease Research Laboratory serum titers >1:32; the findings were normal.[12]

The present study showed that patients who do not achieve a serological cure at 12 months may have slow serological responses. As those patients may have a benign immune response, long-term follow-up may be essential in order to ensure that there is a serological cure and to detect early complications or treatment failure. Further studies on the most appropriate retreatment may be needed.[1],[3],[13]

A number of studies have reported that patients with an HIV infection showed a slower decrease in rapid plasma regain titers after syphilis treatment than HIV-negative patients.[8],[16],[17],[18] This study found no association between HIV infection and serological cure; nevertheless, a high CD4 cell count was found to be related with serological cure. The immune status may be more important in determining the cure rate than the HIV infection status. A low CD4 cell count could lead to dysfunction of antibody formation and thereby result in a less effective immune clearance of T. pallidum in HIV patients.[16],[17] On the contrary, a previous study reported that the CD4 cell count and HIV viral load was not associated with cure.[3] Further studies are important to evaluate the relationship between serological cure and HIV status, including the CD4 cell count and viral load.

This study had several limitations. First, it dealt mostly with male patients. Only five women (2.9% of all subjects) were included because women with syphilis are usually treated by gynecologists. Consequently, there was insufficient data for the conduct of an analysis to identify any gender differences. In addition, this retrospective medical record review may have a selection bias: 196 (52%) of the potential study population were excluded because the patients' medical records did not contain information related to the 12-month Venereal Disease Research Laboratory follow-up. Also, most patients, 89%, were in the secondary stage. That may have resulted from the patients being aware of the need to visit a doctor due to having generalized mucocutaneous eruptions (in contrast with the painless and self-improving ulcers of primary syphilis, and the asymptomatic early latent syphilis). Status of partner was not collected in this study. Furthermore, the study had only five patients with a serofast state, which limited the ability to detect the associated factors. Lastly, due to the low sensitivity of the Venereal Disease Research Laboratory which this study used for screening, primary syphilis presenting with painless ulcers may have been missed. An IgM enzyme-linked immunosorbent assay for syphilis is an additional screening test to increase sensitivity for diagnosis and treatment monitoring purposes, but it is relatively costly.[13] As a result, the enzyme-linked immunosorbent assay is infrequently used in a resource-limited country like Thailand. Therefore, further prospective studies based on a wider range of population groups, including a larger patient group and a higher proportion of female patients, may be required.

Most early syphilis patients had achieved a serological cure by 12 months after treatment. The serological cures were associated with a baseline Venereal Disease Research Laboratory >1:16 titers and a CD4 cell count >200 cells/μl in the 6 months preceding the treatment. However, only 22 (12.3%) had a negative Venereal Disease Research Laboratory titer at 1 year after treatment.