A retrospective analysis of all the cases of cutaneous squamous cell carcinoma diagnosed histopathologically at the Postgraduate Institute of Medical Education and Research (PGIMER), Chandigarh over 10 years from 2003 to 2013 was conducted. The demographic profile and predisposing factors with specific reference to primary dermatoses were recorded from the hospital database. The histopathology slides were reviewed by two observers (UNS and GK) to determine the type of squamous cell carcinoma.

A total of 13,426 skin biopsy specimens were reported in our histopathology department during the 10-year period, of which 82 (0.6%) were squamous cell carcinomas and 170 (1.7%) were basal cell carcinomas. The majority of cases were seen by dermatologists at presentation, while some of the Marjolin's ulcers were seen by the plastic surgery services. The mean age at diagnosis of cutaneous squamous cell carcinoma was 53.7 years (range 25–95 years) and males outnumbered females in the ratio of 2:1. The most frequent site of involvement was the lower limbs (34 cases, 41.5%), followed by head and neck (25 cases, 30.5%), upper limbs, genitalia, and trunk [Table - 1].

Squamous cell carcinomas developed in chronic scars and wounds (Marjolin's ulcer) in 36 (43.9%) cases. Most of these patients had post-burn scars [Figure - 1], while a few had chronic non-healing ulcers, chronic osteomyelitis with discharging sinuses and post-surgical scar [Table - 2]. Squamous cell carcinomas arose in chronic inflammatory dermatoses and genodermatoses in 10 (12.2%) patients; these included genital lichen sclerosus et atrophicus in 4 (4.9%) patients [Figure - 2]a, verrucous discoid lupus erythematosus [Figure - 2]b in 3 (3.7%), lichen planus hypertrophicus [Figure - 3]a in 2 (2.4%), and xeroderma pigmentosum [Figure - 3]b in 1 (1.2%) patient. Post-renal transplant immunosuppression was suspected to be the cause in one case (1.2%). No predisposing factors were found in 35 (42.7%) patients [Table - 2]. 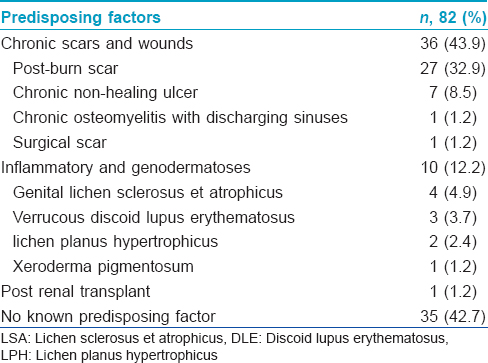 The age-wise distribution of predisposing conditions for cutaneous squamous cell carcinoma is shown in [Table - 3]. Predisposing conditions were common (29/34; 85.3%) among tumors developing on the lower limbs, with Marjolin's ulcers appearing in chronic scars in 27 cases, and verrucous discoid lupus erythematosus and lichen planus hypertrophicus in 1 case each. The remaining five patients had de novo squamous cell carcinoma, of whom three were farmers and two were government employees. 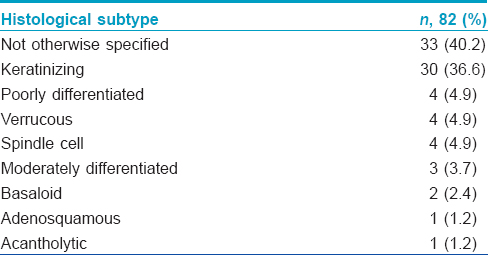 The most common site of involvement in our study was the lower limbs (41.5%), followed by head and neck;[6] however in a recent study on non-melanoma skin cancers from Karnataka [3] the head and neck (50%) was the most frequently involved site, followed by the lower limbs (38.4%). In a study evaluating dermatologic malignancies in Nigeria, the lower limb was the most commonly affected site, followed by external genitalia and anus.[2] The predilection of cutaneous squamous cell carcinoma for a relatively photoprotected site such as the lower limbs in our study may be due to the frequent occurrence of predisposing lesions (burn scars, chronic non-healing ulcers and lichen planus hypertrophicus) at this site.

It is important that dermatologists should be aware of the underlying risk factors for cutaneous squamous cell carcinoma for early diagnosis and appropriate treatment. Cutaneous squamous cell carcinoma in dark skin tends to arise in non-healing ulcers, chronic scars, inflammatory, infectious, and genodermatoses in 20–40% of cases.[1] In the present study, post-burn scars (32.9%) and chronic non-healing ulcers (8.5%) were the most frequent precursor lesions for Marjolin's ulcer.[5] Marjolin's ulcer develops at sites of chronic irritation or injury and although burn scars are the most common precursor lesions, they may also arise in pressure sores, venous ulcers, traumatic wounds, osteomyelitis, sinus tracts and fistulas. In a review of 433 patients with Marjolin's ulcer, the lower limb was the most common site of involvement in 53.3% cases and the most frequent predisposing factor was burn scar (76.5%), followed by traumatic wounds (8.1%).[6]

Other inflammatory and infectious dermatoses such as erythema ab igne, porokeratosis, hidradenitis suppurativa, donovanosis, lupus vulgaris, and less frequently genodermatoses like epidermodysplasia verruciformis and epidermolysis bullosa may give rise to squamous cell carcinoma in dark skin.[5]

Verrucous carcinoma is a low grade, well differentiated variant of squamous cell carcinoma. Although any site may be involved, it is commonly described in the anogenital region (Buschke–Lowenstein tumor), oral mucosa, and plantar surface of the foot (carcinoma cuniculatum).[5] Of the four patients with verrucous carcinoma in our study, two presented with lesions on the sole and one each on the glans penis and face.

Spindle cell or sarcomatoid squamous cell carcinoma is a rare variant that shows atypical spindle cells with elongated vesicular nuclei forming fascicles that infiltrate singly, deep into the dermis and subcutis. Characteristically, it is positive for both cytokeratins and vimentin. The spindle cell variant was recognized in four cases in our study. A de novo presentation of this variant has been reported from India as a painful firm nodule with sinuses discharging blackish material on the face.[12]

Basaloid squamous cell carcinoma has been mostly described in the aerodigestive tract and rarely in the skin. Immunohistochemical stains reveal positivity for cytokeratins and negativity for Ber-EP4.[13] Two of our patients were diagnosed with the basaloid variant.

Adenosquamous carcinoma is a rare variant considered to be more aggressive than the classical type. It is characterized by anastomosing islands of squamous cells with formation of keratin pearls and glands lined by a cuboidal or low columnar epithelium. Glandular differentiation is highlighted by carcinoembryonic antigen positivity.[14] This subtype was found in one patient in our study.

Acantholytic or adenoid variant is histologically characterized by typical squamous differentiation with areas of keratinocyte acantholysis giving a pseudoglandular appearance and has a favorable prognosis. We recorded only one patient with acantholytic variant of squamous cell carcinoma.

The limitation of our study was retrospective assessment of records due to which complete clinical details including occupational history and interval between the precursor lesion and onset of malignancy could not be ascertained. We could not perform immunohistochemistry for human papilloma virus and p53 tumor suppressor protein due to unavailability of these facilities.

The present study highlights the common dermatologic conditions that can evolve into squamous cell carcinoma and the spectrum of histopathologic variants. As the prognosis of squamous cell carcinoma in the setting of premalignant dermatoses is poor, such patients should be periodically followed up and subjected to histopathological examination for definite diagnosis, thereby facilitating timely intervention.