Allergic contact dermatitis (ACD), a delayed type of hypersensitivity reaction developing in sensitized individuals after environmental exposure to allergens, is a challenging problem with considerable morbidity and economic impact. [1],[2] Prevention of contact with the incriminating allergens forms the main component of management of ACD, and patch testing is a useful tool for detecting it. [2] The exposure to allergens and the type of allergens included in standard patch test series varies considerably from area-to-area, depending on the local experience. [1]

We conducted the study with the aim of having preliminary experience of patch testing in Kashmir, in the newly set-up contact dermatitis clinic of our department. All consecutive clinically suspected cases of ACD of all age groups visiting the clinic over a period of 7 months, from mid-May to mid-December 2012, were included in the study. Details regarding age, sex, occupation, residential background, duration and pattern of disease were recorded in case sheet after obtaining written informed consent. Personal or family history of atopy, present or past history of hypersensitivity and other dermatological and systemic illness was also recorded. Those with atopy, hypersensitive reactions were excluded in order to avoid false positive results. Cases were subjected to patch testing as per the standard guidelines, taking all necessary precautions. Patch test series used was Indian standard series (ISS), containing 25 allergens, and approved by contact and occupational dermatitis forum of India. Patch testing with conventional ISS was undertaken for convenience of getting a variety of allergens combined in a single battery. We did not select any particular occupational group or a specific patient group and so did not use any specific allergen series. Reading and grading of positivity was carried out according to International Contact Dermatitis Research Group guidelines. [3]

In males, the most common reactions were observed with potassium dichromate showing nine reactions (26.5%), followed by 5 (14.7%) with thiuram mix. In females, the most common allergen was nickel sulfate with nine reactions (40.9%), followed by 5 (22.7%) with cobalt chloride. Positive reaction exclusively in males was seen with potassium dichromate, PPD, mercapto mix, 2-mercaptobenzothiazole, nitrofurazone, lanolin alcohol, thiuram mix, black rubber mix, formaldehyde, and parthenolide. Positive reactions exclusive to females were due to benzocaine, nickel sulfate, and polyethylene glycol 400. No reaction was seen with petrolatum, paraben mix, gentamicin, epoxy resin, p-chloro-m-cresol, and clioquinol. Overall present relevance rate was 55.4% (31 reactions out of 56) and the results are summarized in [Table - 2]. The occupational status of the study group and its relation with positive reaction is summarized in [Table - 3]. 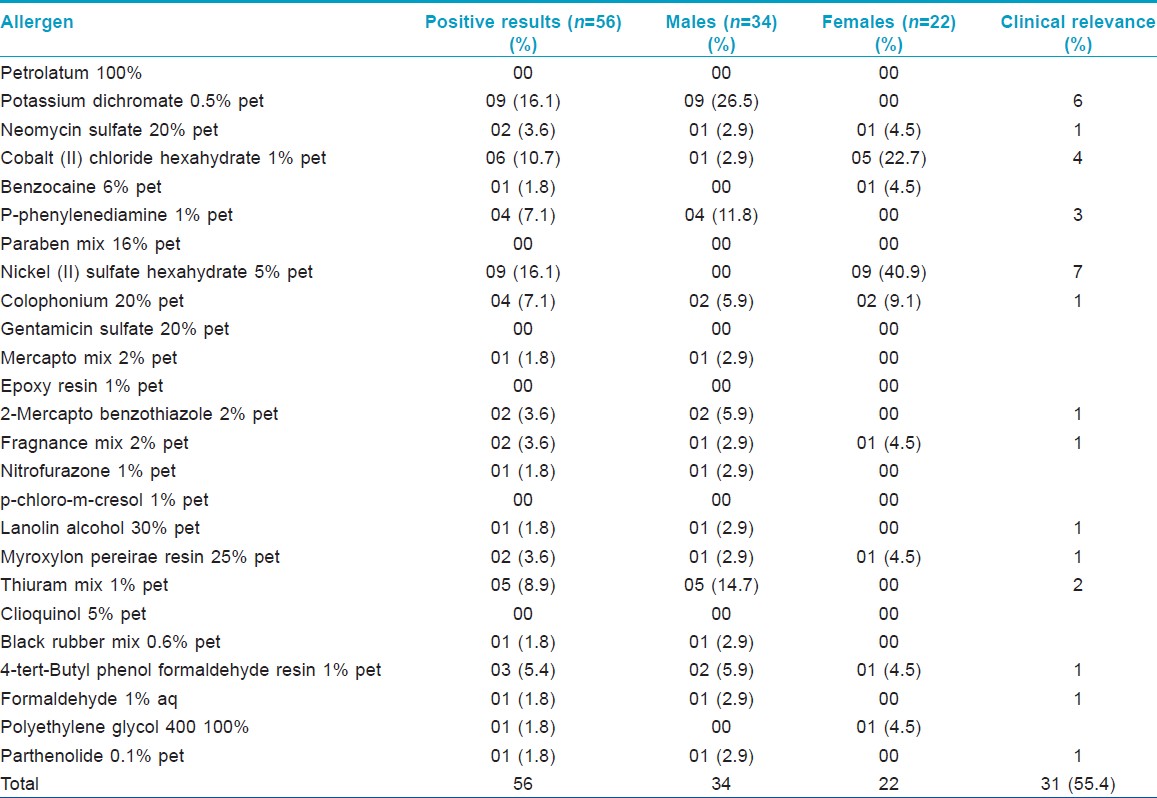 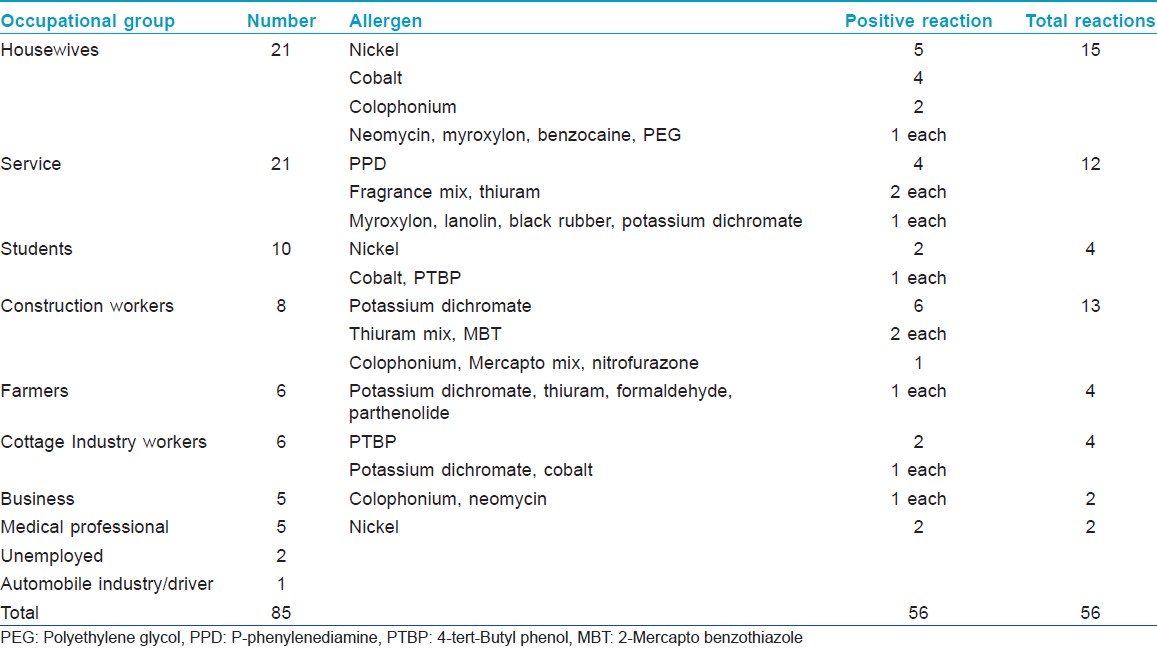 The age, sex and duration of illness variables in our study were similar to other studies. [1],[2],[4],[5],[6],[7] 60% cases were from urban background, probably because our hospital is located in the main city. Dermatitis of hands and feet was the most common clinical pattern in our study, similar to some studies from India and abroad [2] and different from other Indian studies where ABCD is common. [7]

The five most common allergens were potassium dichromate and nickel sulfate, followed by cobalt chloride, thiuram mix, PPD and colophonium, similar to other studies. [1],[2],[4],[5],[6],[7],[8]

In our study, all reactions to potassium dichromate, thiuram mix, and PPD were seen exclusively in males and all reactions to nickel sulfate and most to cobalt (5 out of 6), in females, similar to other studies. [1],[2],[7],[8] In Kashmir, most of the construction and outdoor labor work is carried out by males and females are not involved much in outdoor work especially, construction (cement) work. So all positive reactions to potassium dichromate in our study were found in males and no female was found positive because of the above reason.

We found only one positive reaction to parthenolide than the high positive percentage seen in other Indian studies. [2],[7] The positivity to parthenolide does not mean a definite implication of Parthenium weed for the ACD and does not have much sensitivity. Exposure level to Parthenium plant as such is very low in Kashmir, which could be the reason for low positivity in this preliminary study.

In conclusion, this preliminary study conducted to experience the results of patch testing at our center reveals results generally similar to that of other centers, both in country and abroad. Few differences, though, may be because of different climatic conditions, traditional, and cultural values in Kashmir causing different exposure patterns. We intend to carry forward the study in order to obtain larger data.