Background: Onychomycosis is a world-wide public health concern in children, requiring epidemiological data for different regions for control and prevention. Aim: The aim of this study was to evaluate the predominant pathogens and risk factors for onychomycosis in school children living in Kayseri, Turkey. Methods: This study included 8122 school children, aged 5-16 years, living in the rural and urban areas around Kayseri. Onychomycosis was clinically classified as distal and lateral subungual (DLSO), proximal subungual, superficial white, endonyx and totally dystrophic onychomycosis. Nail samples from children with clinically diagnosed onychomycosis were collected, examined by direct microscopy and inoculated for culture study. The demographic features and possible risk factors were recorded and assessed by logistic regression models. Results: We clinically diagnosed onychomycosis in 152 out of 8,122 (0.18%) school children. DLSO was the most frequent clinical diagnosis (120/152, 78.9%). Culture-positive onychomycosis was detected in 27/152 (17.7%) children. The prevalence of culture-positive onychomycosis was determined as 0.33%. All culture-positive samples were only from toenails. The onychomycosis causative agents were dermatophytes in 17/27 cases (62.9%), including Trichophyton rubrum 12 (44.4%), Trichophyton mentagrophytes 1 (3.7%), Trichophyton tonsurans 1 (3.7%) and Trichophyton spp. 3 (11.1%) and yeasts in 10/27 cases (37.1%), including Candida glabrata 4 (14.8%), Candida parapsilosis 1 (3.7%), Trichosporon 2 (7.4%) and Rhodotorula 3 (11.1%). Age, father's occupation, number of siblings and rooms were statistically associated with the frequency of onychomycosis. Conclusions: Although to be prevalence of onychomycosis in school children in central Anatolia of Turkey seems very low degree, pediatric onychomycosis is a growing public health concern all over the world. Children having more siblings or unemployed fathers and children living in small house as well as older children should be examined carefully for onychomycosis.
Keywords: Dermatophytes, epidemiology, pediatric onychomycosis, school children, yeasts

Onychomycosis can be caused by dermatophytes, yeasts and non-dermatophyte molds that are transmitted through infected moist floor areas and less often transmitted via direct personal contact. [1] In Europe, North America and Turkey, the most common etiologic agents of onychomycosis are dermatophytes, in children and adults, whereas yeasts are the most common in Saudi Arabia and Pakistan in the general population. [2],[3],[4],[5]

The aim of this study was to estimate the prevalence of onychomycosis in school children living in rural and urban areas of central Anatolia of Turkey and to determine the risk factors for infection.

This cross-sectional epidemiological study was conducted in school children in Kayseri, a city with a total of 139,422 school children in central Anatolia, Turkey. The climate in Kayseri is cold, snowy and wet in winter while dry and hot in summer. The lowest and highest temperature in Kayseri are −5.2°C and +25.7°C (mean 7.73°C). Mean humidity is 69.3%. This study was approved by the Erciyes University Ethics Committee. A total of 8,122 children, aged 5-16 years, from randomly selected 24 primary schools located in Kayseri were selected by cluster sampling method and examined for onychomycosis at the first visit. Clinical examination of fingernails and toenails was performed by a pediatrician and a medical physician specialized on public health at the same time. Inclusion criteria were school children aged 5-16 year-old studying in Kayseri. Exclusion criteria were <5 or >16 years old.

Onychomycosis was clinically classified as distal and lateral subungual (DLSO), proximal subungual (PSO), superficial white (SWO), endonyx and totally dystrophic (TDO) onychomycosis. If there was onycholysis and subungual hyperkeratosis, thickening or distortion of the nail plate, it was diagnosed as DLSO. It was considered as PSO in the evidence of subungual hyperkeratosis, transverse leukonychia, proximal onycholysis or destruction of the proximal nail plate. The diagnosis of SWO was defined as homogenously white nail, diffusely opaque with variable pigmentation, flexible and friable. Nails with diffuse milky-white discoloration, with normal thickness and normal plate surface, in the absence of nail bed hyperkeratosis or onycholysis were diagnosed as endonyx. If there was total destruction of the entire nail plate including whole thickness of the plate, the nail bed and matrix and if dystrophic and thick nail crumbled and disappeared leaving a thickened abnormal nail bed retaining keratotic nail debris, this clinical pattern was diagnosed as TDO. Paronychia was determined if there was painful swelling and erythema of the proximal and lateral nail folds. [13] When onychomycosis was clinically diagnosed, samples from clinically suspected nails after cleaning with 70% alcohol were collected by scraping or shaving from the distal portion of the nail, the proximal nail bed, the undersurface of the nail plate, the friable area of leukonykia, hyperkeratotic nail bed, opaque white area and proximal, distal and lateral nail edge with a disposable scalpel or curette. Onycholytic nail plate was removed before sampling. Outermost debris was discarded. Child′s feet with abnormal onychomycosis-suspected areas were also examined for desquamation and/or scaling, plantar fissures, discoloration, and groove. When tinea pedis was suspected, samples from the feet skin, interdigital surfaces, toe web or the surrounding skin were collected. After samples were examined with 15% potassium hydroxide (KOH) solution by direct microscopy, the samples were cultured according to literature. [14] Isolated yeast that did not form a germ tube was identified by the growth properties in corn-meal agar and by using ID 32 C (Bio-Merieuxi, Marcy I′Etoile and France). Dermatophytes when isolated were accepted as the causative agent and a patient of onychomycosis was diagnosed when a positive culture was detected for a dermatophyte.

C. albicans was regarded as the primary pathogen on repeated isolation along with a direct microscopy outcome demonstrating yeast pseudomycelia. Non-C. albicans spp. were admitted as the primary pathogen with two or more isolation as long as there was yeast pseudomycelia in direct microscopic examination and no other concomitant pathogen. Candida spp. was taken into account as the secondary pathogen if they were isolated with dermatophyte or non-dermatophyte pathogenic mold with microscopy revealing budding yeast cells.

The following details were recorded for each child: Age, sex, school grade, number of siblings, parents′ educational and occupational status, family income, frequency of having baths (per week) and sock changing, animal husbandry, school settlement, number of rooms and types of shoes.

Statistical analysis was conducted using the package SPSS 15.0 (Chicago, IL). Categorical variables were defined as the number and percentage (%) and analyzed using the Chi-square test. P values less than 0.05 were accepted as statistically significant. The dependent variable in multivariate models was the presence of culture-positive dermatophytic infection. Odds ratios with 95% confidence intervals (CI 95%) were calculated from the coefficients. 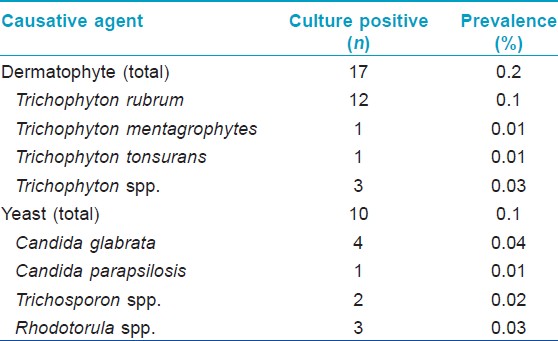 Table 2: Prevalence of causative agents in onychomycosis in school children 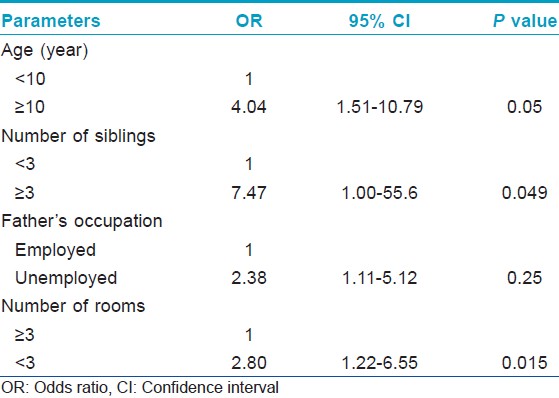 Onychomycosis is considered among the most common nail diseases in childhood along with eczema, psoriasis, lichen planus, onychodystrophy, alopecia areata and genodermatoses. [6],[14] Dystrophic nails must alert the clinician to the possibility of onychomycosis and should be differentiated from other acquired and congenital conditions. [15] To our knowledge, this is the first comprehensive study of onychomycosis performed in children living in rural and urban areas in central Anatolia, Turkey. In our study, the overall prevalence of onychomycosis was 0.33% and T. rubrum was the most prominent isolate as dermatophytes and C. glabrata as yeast. Our study also showed that age, parent′s occupational status, number of siblings and rooms were important factors for the frequency of onychomycosis.

In the 1950s, epidemiological studies performed in Turkey reported that the most prevalent causative isolate was Epidermophyton floccosum. [20] However, T. rubrum was detected as the main pathogen for onychomycosis in this study, which was similar to that in Turkey, India, Western United States, Northern and Southern Europe and was different from that in Africa, supporting the finding that the flora of dermatophytes has recently changed. [5],[9],[19],[20],[21],[22],[23] A significant increase in the prevalence of T. rubrum over the last decades may perhaps be due to the greater availability of fungi in the environment and in adults after prolongation of life accompanied by various diseases facilitating the transfer of fungi to children. [11],[18],[23]

DLSO type could be seen in children and adults and was the most common clinical pattern in our study, in agreement with previous reports. [10],[21] It is known that SWO is very rare in children. [13] Similarly, we detected only one case of SWO in our study. Total dystrophic onychomycosis has also been reported very rarely in children probably due to the faster growth rate of nails compared to adults. [1] We detected only one case with TDO caused by T. rubrum. Onychomycosis was associated with tinea pedis in three patients (11.1%); although, this association was found as high as 47% in previous studies. [1]

Onychomycosis prevalence is higher in adults than in children and tends to become more common over the years. [10] Our study showed that onychomycosis was 4-fold (CI: 95% 1.51-10.79) more common in children aged ≥10 years than those aged <10 years, in agreement with other studies. [9],[10],[11],[18] This can be related to increasing usage of occlusive shoes and more sporting activities resulting in more traumas with increasing age.

In conclusion, although prevalence of onychomycosis in school children in central Anatolia seems very low, onychomycosis is a growing public health concern all over the world. Children having more siblings or unemployed fathers and children living in small house as well as older children should be examined carefully for onychomycosis. Physicians should consider this infection in the differential diagnosis of diseases affecting nails and provide valuable epidemiological data on future efforts for the prevention and treatment of onychomycosis.