Prevalence of metabolic syndrome and cardiovascular changes in patients with chronic plaque psoriasis and their correlation with disease severity: A hospital-based cross-sectional study

Psoriasis is a chronic, systemic, inflammatory disease with several clinical variants, the most common being chronic plaque psoriasis. It affects 1–3% of the population worldwide.[1] Despite the fact that psoriasis carries minimal risk of mortality, it is associated with significant morbidity which may have a significant impact on quality of life of patients even if a relatively limited body surface area is involved.[2] Globally, psoriasis has been reported to be associated with metabolic syndrome including obesity, dyslipidemia, diabetes, hypertension and more recently, atherosclerosis.[3],[4],[5],[6] However, most of these associations are based on computerized medical databases. Despite evidence suggesting that Indians are genetically and environmentally more susceptible to develop metabolic syndrome, there is a paucity of data on the association between psoriasis and metabolic syndrome from the Indian subcontinent.[7],[8],[9],[10],[11],[12] Our objective was to evaluate the prevalence of metabolic syndrome in patients of chronic plaque psoriasis compared to healthy controls and to correlate the prevalence of metabolic syndrome with severity and duration of psoriasis. We also evaluated the prevalence of cardiac changes and subatherosclerosis in cases and controls selected from the original cohort.

This cross-sectional study was conducted at All India Institute of Medical Sciences, New Delhi between January 2011 and October 2012, after receiving ethical clearance from the Institute's ethical board.

Sample size was calculated using the following data: from the available information, it was expected that 30% of patients with psoriasis would have metabolic syndrome.[7],[10] The required sample size for an error margin of 8% and confidence level of 95% was 140. Consecutive patients with chronic plaque psoriasis attending the dermatology outpatient department were recruited after obtaining written informed consent. We included patients who were 18 years or older and excluded patients who had taken systemic therapy for psoriasis including acitretin, cyclosporine, methotrexate, phototherapy or biologics in the 2 months before their enrollment. After taking informed consent, healthy controls of similar age and sex were chosen from the general population including colleagues, hospital staff and relatives or attendants of dermatology inpatients. From this original cohort, 30 patients and 30 controls were selected by the systemic sampling method to study the prevalence of cardiac changes and subclinical atherosclerosis.

The study groups were evaluated by a dermatologist who recorded their demographic, biometric and the other relevant data, including age, sex, weight, height, body mass index, waist circumference, blood pressure, smoking and alcohol consumption habits, duration of disease, type and severity of psoriasis, presence and distribution of psoriatic arthropathy and concomitant medications. Smokers and alcohol drinkers were classified into current and ex-smokers or alcohol drinkers. Current smokers were defined as persons smoking tobacco at the time of study and those who stopped smoking less than 6 months ago. Ex-smokers were those who had stopped smoking more than 6 months before enrollment in the study. Non-smokers were persons who had never smoked a tobacco product. Similarly, current alcohol drinkers were defined as those who continued to have alcoholic beverages at the time of study and those who had stopped alcohol intake for less than 6 months. Ex-drinkers were defined as those who had not consumed alcohol for more than 6 months before enrollment. Non-drinkers were persons who had never consumed alcoholic drinks.

Psoriasis was classified as of short (<1 year), intermediate (1–3 years) or long (>3 years) duration. Patients were classified as having mild, moderate or severe psoriasis based on the psoriasis area and severity index (PASI) score (<10, 10-14 and >14 respectively). Body mass index was calculated as the ratio of weight in kg to the square of height in m 2. Waist circumference was measured by locating the uppermost part of the hip bone and placing a measuring tape around the abdomen snugly but without causing compression of the skin, ensuring that the tape was horizontal. Blood pressure was recorded as an average of two measurements, taken 5 min apart after subjects had been at rest for at least 10 min. A venous blood sample was taken in all patients and controls, after overnight fasting (at least 8 h) to estimate the fasting blood sugar (enzymatic method) and fasting lipid profile (enzymatic method).

The diagnosis of metabolic syndrome was made based on the presence of ≥3 criteria of the modified National Cholesterol Education Program's Adult Treatment Panel III:[13] waist circumference >102 cm in men or >88 cm in women, hypertriglyceridemia ≥150 mg/dL, high-density lipoprotein cholesterol <40 mg/dL in men or <50 mg/dL in women, blood pressure ≥130/ 85 mmHg and fasting plasma glucose ≥100 mg/dL.

Thirty patients and 30 controls were then selected for evaluating the prevalence of subatherosclerosis and cardiac changes. Cardiac changes were studied with electrocardiography and echocardiography by a cardiologist. Carotid intima-media thickness (CIMT) of both common carotid arteries was measured by a cardiovascular radiologist using a high-resolution B-mode ultrasound (ATL 3500) with the 5–10 MHz linear array broadband transducer positioned in the common carotid artery, 1 cm distal to the carotid bifurcation in the posterior wall. Scanning involved examination of the common carotid artery both in longitudinal and transverse planes [Figure - 1].

Data analysis was done using Stata software version 11.1 (StataCorp. 2009, College Station, TX: StataCorp LP). Quantitative characteristics such as age, waist circumference, systolic and diastolic blood pressures, high-density lipoprotein and triglyceride levels were compared between patients and controls using a two-sample t-test. Wilcoxon rank-sum (Mann–Whitney) test was also used for non-normally distributed values such as carotid intima-media thickness. Qualitative variables such as sex, duration and severity classifications of disease, smoking and alcohol use were compared between patients and controls using Chi-square test. The prevalence of metabolic syndrome and its components in patients with chronic plaque psoriasis of different severities and durations was compared using a trend Chi-square test. The prevalence of metabolic syndrome among patients was calculated as a proportion along with a 95% confidence interval. Odds ratios with 95% confidence intervals were calculated for different exposures using logistic regression analysis. Multiple logistic regression was employed to adjust for possible confounders. The correlation of different study parameters with severity of psoriasis was assessed by one-way ANOVA followed by Bonferroni correction for multiple comparisons. Odds ratio was also calculated along with 95% confidence intervals after categorizing study variables. A P< 0.05 was considered to be statistically significant.

Demographic characteristics of the study population and disease characteristics are reported in [Table - 1]. Cases and controls were residents of various states of Northern India. The duration of psoriasis in our patients ranged from 3 months to 35 years while the psoriasis area and severity index (PASI) score of the 140 patients with psoriasis ranged from 2 to 30. 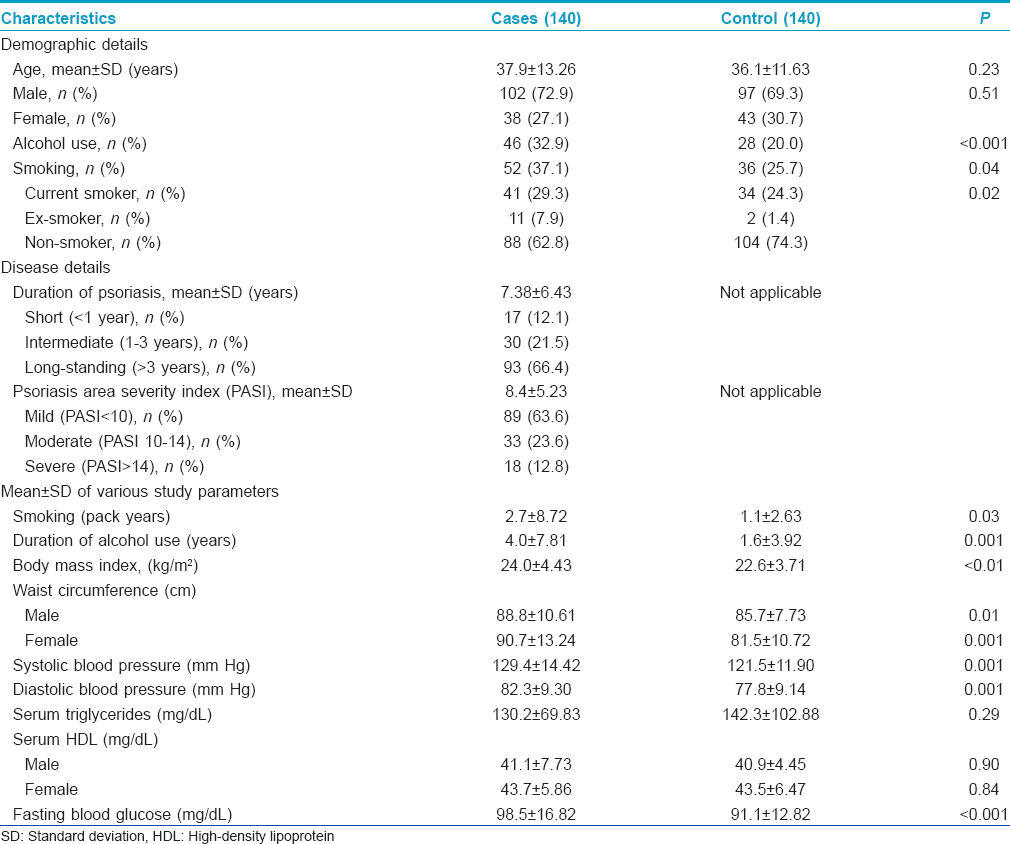 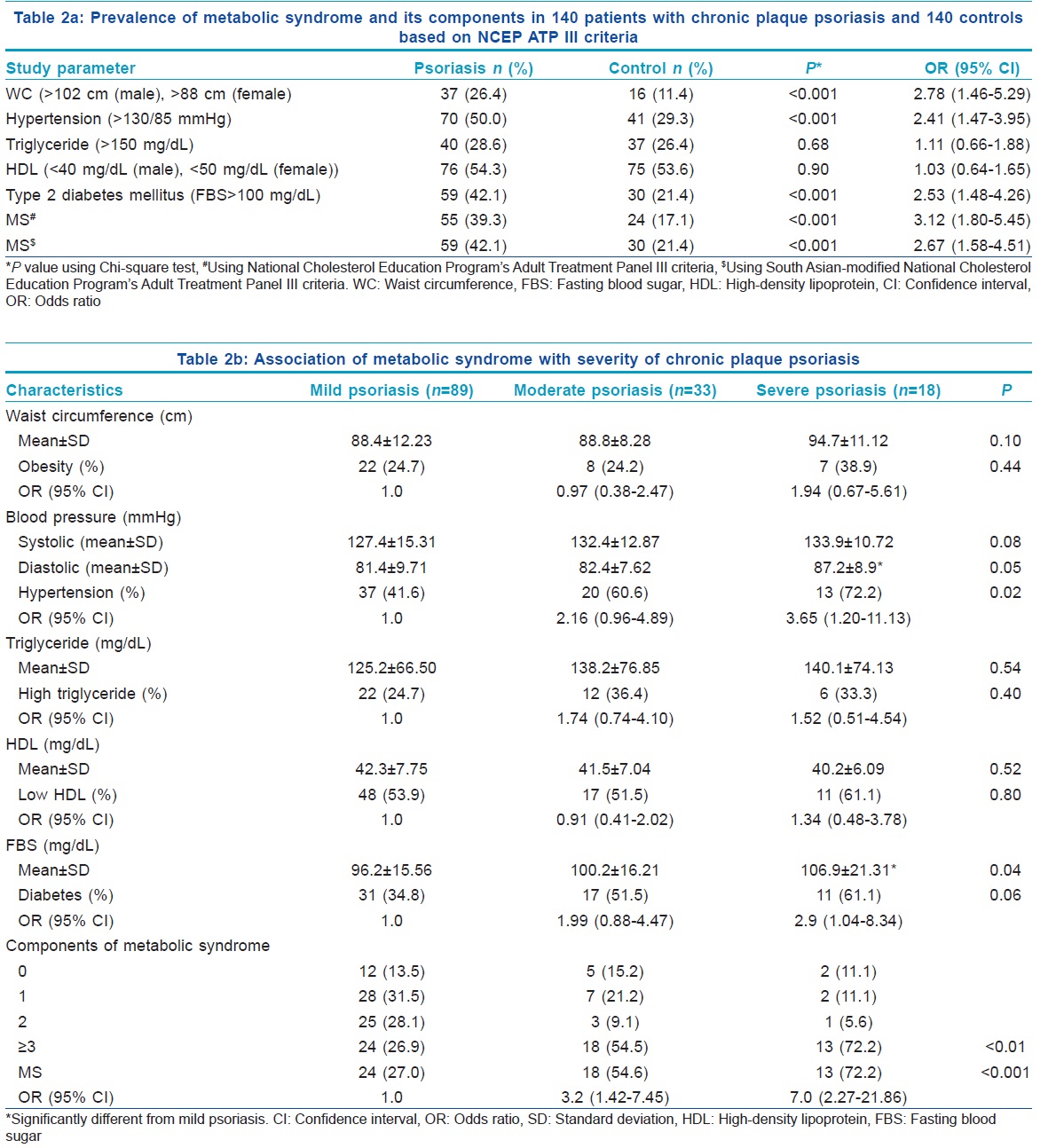 There is substantial data to suggest that prevalence of various components of metabolic syndrome is higher in patients with psoriasis. From India, while Madanagobalane and Anandan, reported a higher prevalence of obesity in psoriasis patients than in controls, Nisa and Qazi did not observe any such difference in the occurrence of central obesity.[7],[9] The latter study needs to be interpreted keeping in mind the National Family Health Survey 2007 report in which a relatively lower prevalence of obesity was reported in the general population in Jammu and Kashmir (8.7%) compared to other North Indian states. We observed a linear relationship between the severity of psoriasis and prevalence of hypertension and diabetes. Though several studies from the West have shown an association between hypertension and psoriasis, Indian studies have been equivocal.[15],[17],[18] However, the studies by Pereira et al., Madanagobalane and Anandan, Nigam and Dayal and Sundharam et al. corroborate our observations on the association of psoriasis and diabetes.[8],[9],[19],[20] Langan et al. noted a similar relationship of severity of psoriasis to the presence of obesity, hypertension and elevated fasting blood sugar.[16] However, they categorized the severity of disease based on the percentage of body surface area involvement which may be a poor marker of the severity of inflammation. Of all the components of metabolic syndrome, inconsistencies across various studies are maximal with respect to dyslipidemia, with some studies indicating an association of dyslipidemia with psoriasis and others noting an association with respect to levels of some components of serum lipids.[7],[9],[15],[16],[18],[21] However, several workers were not able to corroborate these findings.[8],[22],[23],[24]

Our findings are also consistent with previous studies of Gonzalez–Juanatey et al., Yiu et al. and Mongy et al. all of whom had also observed carotid plaques in their patients with psoriasis.[6],[27],[28] Karoli et al. in a study of 100 patients from India had shown that in patients with psoriasis, carotid intima-media thickness was associated with increased severity and duration of psoriasis.[10] There was no significant correlation in electrocardiography, echocardiogram and carotid intima-media thickness findings in the present as well as previous studies.[6],[28]

A limitation of our study, since it was cross-sectional, was that it does not take into account the directionality of the association to be set. The hypothesis that metabolic syndrome can occur more frequently in psoriasis needs to be validated in large prospective studies.

We found a higher prevalence of metabolic syndrome and its individual components in patients with psoriasis; these could play a role in accelerating the development of atherosclerosis. Though the association was seen at all severities of psoriasis, it increased as severity increased.

We also observed a significant increase in carotid artery intima-media thickness in psoriasis patients. There is a paucity of data on cardiovascular changes and prevalence of subclinical atherosclerosis in patients with psoriasis in comparison to controls in the Indian population but our study suggests a need to evaluate these aspects further with larger, prospective studies.

We suggest that patients with moderate to severe psoriasis and those with psoriasis for longer than 3 years be screened routinely for metabolic syndrome and cardiovascular disease and also be encouraged to correct their modifiable cardiovascular risk factors aggressively.

We would like to thank the Indian Council of Medical Research for providing a grant to conduct this study.

The Indian Council of Medical Research awarded an MD Thesis Grant of 25,000 INR for this study. It was given in two phases – first (15,000 INR) during the study and second (10,000 INR) after completion of the study.