Prevalence of metabolic syndrome in patients with psoriasis

Background: Psoriasis is a chronic inflammatory disease of the skin and is associated with an increased risk of cardiovascular atherosclerosis. Metabolic syndrome, a conglomerate of various clinical and biochemical parameters is a significant predictor of atherosclerotic disease and the associated risk for cardiovascular events in such patients. Aim: To investigate the prevalence of metabolic syndrome in patients with psoriasis. Methods: The study was a prospective, hospital based case-control study involving 150 adult patients with chronic plaque psoriasis and 150 healthy controls. Venous samples were taken at the enrolment visit after the subjects had fasted overnight (at least 8 h). Serum cholesterol and triglycerides were measured with enzymatic procedures. Plasma glucose was measured using a glucose oxidase method. Metabolic syndrome was diagnosed by the presence of three or more criteria of the National Cholesterol Education Programme's Adult Panel III (ATP III). Statistical analysis of the data was done using statistical processing software (SPSS-17) and epi-info software. Results: Metabolic syndrome was significantly more common in psoriatic patients than in controls 42(28%) vs 9(6%), odds ratio (OR) = 6.09, P<0.05. Psoriatic patients also had a significantly higher prevalence of hypertriglyceridaemia (73/150 among cases vs 24/150 among controls; P<0.05), arterial hypertension (74/150 among cases vs 24/150 among controls; P<0.05) and impaired fasting plasma glucose levels (27/150 among cases vs 04/150 among controls; P<0.05). Psoriatic patients with metabolic syndrome had mean disease duration of 13.67±11.87 years against 6.46±5.80 years in those without metabolic syndrome. Conclusion: There is a significantly higher prevalence of metabolic syndrome in psoriasis patients as compared to general population and so is the risk of having atherosclerotic adversity. While managing the psoriatic plaques of these patients, concerns should extend to the atherosclerotic plaques as well.
Keywords: Inflammatory states, metabolic syndrome, psoriasis

Psoriasis is a chronic inflammatory skin disease that affects 1-3% of the population. [1],[2] Epidemiological research has shown that hypertension, heart failure and diabetes are significantly more common in patients with psoriasis than in controls. [3] Moreover, an increased mortality from cardiovascular disease in patients with severe psoriasis has been documented and psoriasis may confer an independent risk of myocardial infarction especially in young patients. [4] Major factors that may contribute to this unfavorable cardiovascular risk profile include cigarette smoking, obesity, physical inactivity, hyperhomocysteinemia and psychological stress, which have a higher prevalence among patients with psoriasis. Obesity is associated with severe psoriasis and is reported about twice as frequently among psoriasis patients as in the general population. [3],[5] The association between psoriasis and metabolic syndrome is also true for mild severity psoriasis and is independent from the tendency of psoriatic patients to be obese. [5]

This study was conducted within a duration of eighteen months (January 2008 to June 2009), in the Department of Dermatology, STD and Leprosy, SMHS Hospital (associated teaching hospital of Government Medical College Srinagar, Jammu and Kashmir, India). The study was a hospital-based case-control study involving a series of 150 patients. Inclusion criteria for patients were age more than 18 years, disease duration of at least six months and not receiving any systemic treatment for psoriasis for at least one month before enrolment. The controls were patients with insignificant complaints, attendants of patients and staff members of the hospital. The source population for cases and controls was the same. An informed consent was taken from all patients and patient characteristics were recorded on a standard proforma. Statistical analysis of the data was done using statistical processing software (SPSS-17) and epi-info software.

Relevant data included age, gender, weight, height, body mass index, waist circumference, blood pressure, smoking habit, age of onset and duration of psoriasis, type and severity of psoriasis. Body mass index (BMI) was calculated as weight in kilograms/height 2 in meters. To determine waist circumference, we located the upper hip bone and placed the measuring tape at the level of the upper most part of the hip bone around the abdomen (ensuing the tape measure was horizontal). The tape measure was snug but did not cause compression on the skin. Blood pressure was recorded as the average of two measurements after subjects have been sitting for five minutes. Severity of psoriasis was assessed according to psoriasis area and severity index (PASI) and percent body surface area (%BSA) involvement. Chronic plaque psoriasis was considered to be localized or disseminated when it covered less or more than 10% of the BSA involvement. Metabolic syndrome was diagnosed by the presence of three or more of the five criteria of the National Cholesterol Education Programme′s Adult Panel III (ATP III): waist circumference > 102 cm in men or > 88 cm in women; hypertriglyceridaemia > 1.7 mmol/l (150mg/dl); high density lipoprotein (HDL) cholesterol < 1.0mmol/l (40mg/dl) in men or < 1.3mmol/dl (50mg/dl) in women; blood pressure > 130/85 mmHg; fasting plasma glucose of > 6.1 mmol/l (100mg/dl). [6] Venous samples were taken at the enrolment visit after the subjects had fasted overnight (at least 8 h). Serum cholesterol and triglycerides were measured with enzymatic procedures. Plasma glucose was measured using a glucose oxidase method. The study was approved by the institutional ethical committee.

The study included 150 cases and 150 controls with descriptive chracteristics of each group given in [Table - 1]. Psoriasis area and severity index (PASI) score ranged from 2.3 to 70 (median PASI=13.05). Body surface area (BSA) involved ranged from 2% to 90%, with a median BSA involvement of 20. Ninety seven patients had involved BSA > 10% while fifty three had involved BSA < 10%. Disease duration in cases ranged from six months to thirty years with a mean disease duration of 6.67 years. 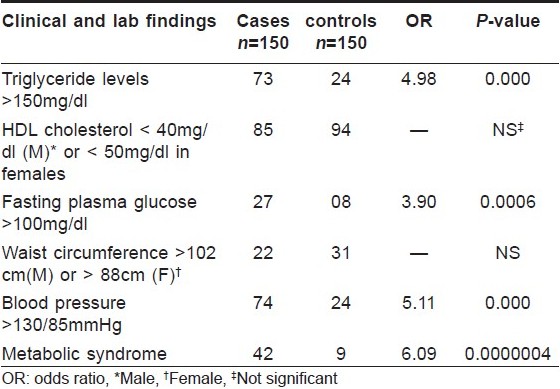 Table 2 :The distribution of clinical and laboratory findings in cases and controls 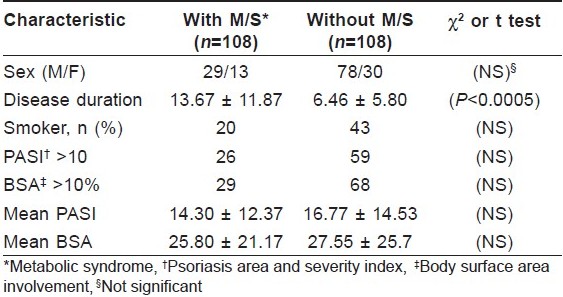 Table 3 :Descriptive features of psoriatic patients with and without metabolic syndrome

The hypothesis that the atherosclerotic and the psoriatic plaques are the two offshoots of same root is a focus of current research. The following few recent advances in the understanding of atherosclerosis, psoriasis and metabolic syndrome beget the consideration of exploring a common etiopathogenetic pathway for the diseases.

Although the exact etiopathogenetic link is yet to be elucidated, certain proinflammatory cytokines and immunological mediators which are shared by the pathognetic mechanisms of the two diseases have been identified. Proinflammatory cytokines like TNF-a and IL-6, which are over expressed in psoriasis plaques, are known to contribute to features of the metabolic syndrome, such as hypertension, dyslipidaemia and insulin resistance. [11] Similar to psoriasis, the metabolic syndrome is characterized by an increase in the immunological activity of type 1 helper T cells (T H 1). [12]

Association of psoriasis with individual components of metabolic syndrome had been a focus of many cross-sectional studies in the recent past. Results from such studies are varied and inconsistent with regard to dyslipidemia. Several studies with varying population and analytical approaches have found an association between psoriasis and increased prevalence of diagnosis of dyslipidemia. [14],[15],[16] In addition, multiple studies have documented increased prevalence of diabetes and hypertension in patients with psoriasis. [13],[17],[18]

Niemann et al.[9] used the General Practice Research Database and found higher rates of diabetes mellitus, hypertension, hyperlipidaemia, obesity and smoking in patients with psoriasis than in controls. [9] The same authors also found that patients with severe psoriasis had higher rates of obesity and diabetes mellitus than those with mild psoriasis. Our study also showed a higher prevalence of metabolic syndrome in psoriatic patients. We also observed the higher prevalence of individual components of metabolic syndrome like triglyceride levels >150 mg/dl (73/150 vs 24/150 OR= 4.98, P=0.0005), fasting plasma glucose > 100 mg/dl (27/150 vs 08/150 OR=3.90, p =0.0006) and blood pressure >130/85 (74/150 vs 24/150 OR=5.11, P=0.0005) in patients of psoriasis than in controls, [Table - 1]. Such an association prompts one at looking upon atherosclerotic and psoriatic plaques as related closely to each other but the conclusion awaits establishment of a common or at least closely related etiopathogenetic mechanism. Studies on such an association, till now, point toward the primary role of insulin resistance for both metabolic syndrome and chronic inflammatory state of the body. Therapeutic intervention based on methotrexate and tumor necrosis factor (TNF)-a antagonists seem to diminish the insulin resistance state. An atherogenic lipid profile at the onset of psoriasis has been observed in a well-designed study, which excluded the possible role of confounding factors such as obesity, hypertension, cigarette smoking and physical activity. [10]