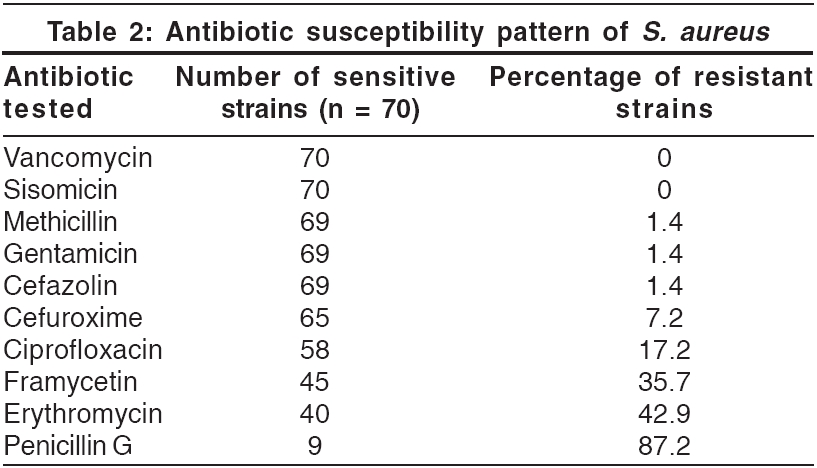 Staphylococcus aureus and S treptococcus pyogenes are the common causative agents of cutaneous bacterial infections.[1] Methicillin-resistant S taphylococcus aureus (MRSA), once considered primarily as a nosocomial pathogen, is being increasingly reported from India as a colonizer in healthy individuals without risk factors and even in community-acquired infections, including pyodermas.[2],[3] The implications of these reports for the current prescription practices for cutaneous bacterial infections are obvious. It is therefore essential to determine the susceptibility pattern of clinical isolates of S. aureus in different communities across our diverse country. The present study was undertaken to determine the prevalence of MRSA in community-acquired primary pyodermas in outpatients visiting an urban tertiary care hospital.

This open prospective survey was carried out in a tertiary care hospital in Mumbai. Eighty-six consecutive patients with primary pyodermas visiting the dermatology outpatient between February and July 2004 were included. Patients with cellulitis, erysipelas, secondary pyodermas or those receiving local or systemic antibiotic therapy and those with a history of hospitalization within the last year were excluded.

Sterile swabs were used for aseptically collecting the exudate or pus from the lesions. They were then processed as per the standard protocol for the isolation of aerobic bacteria.[4] The specimens were inoculated on 5% sheep blood agar; MacConkey′s agar; and mannitol salt agar, which was used as a selective medium for S. aureus . S. aureus was identified based on Gram′s stain morphology, colony characteristics and positive catalase and coagulase tests. Antimicrobial susceptibility test was performed by the Kirby Bauer Disc Diffusion method as per National Committee for Clinical Laboratory Standards (NCCLS) guidelines.[5] The antimicrobials tested included penicillin G [10 units], erythromycin [15 mg], vancomycin [30 mg], sisomycin [10 mg] , gentamicin [10 mg], framycetin [100 mg], ciprofloxacin [5 mg], cefazolin [30 mg] and cefuroxime [30 mg]. S. aureus ATCC 25923 was used as a control. Methicillin resistance was detected by using 1 mg oxacillin discs.

Of the 86 swabs cultured aerobically, growth was obtained in 72, with a culture positivity rate of 83.7%. Only one organism was isolated from any sample. S. aureus was the predominant pathogen, being isolated from 70 patients (81.4%). The remaining two isolates were S. pyogenes . All the strains of S. aureus [Table - 2] were sensitive to vancomycin and sisomycin. The sensitivity to other antibiotics varied. Only one of the seventy strains of S. aureus was methicillin resistant.

The present study was undertaken to determine the prevalence of MRSA in community-acquired primary pyodermas.

Folliculitis and furunculosis were the commonest primary pyodermas, seen in 58.8% and 33.3% of cases respectively. These have also been reported to be the most frequent primary pyodermas in some other studies,[6],[7] while in one study in children, impetigo was the commonest lesion.[8] The majority of our patients were adults, which could account for the high frequency of folliculitis and furunculosis.

All samples in our study yielded monomicrobial flora, with S. aureus isolated from 81.4% of patients and Strepto. pyogenes from 2.3%. Cultures were negative in 16.3% of the patients. Baslas et al. also reported negative cultures in 14.9% of patients.[7] S. aureus is the predominant pathogen reported in other studies as well,[3],[6],[7],[8],[9],[10] including cases of secondary pyodermas. However, since Gram negative bacilli also account for secondary pyodermas, S. aureus is relatively less frequently associated with secondary pyodermas than with primary pyodermas.[7],[10] Other studies have reported polymicrobial flora ranging from 5-16%;[8],[9] this is not surprising since only patients with primary bacterial infections were selected for our study. In another study, Strepto. pyogenes accounted for 26.98% of the total isolates.[11]

Many reports from India and Asia have highlighted the prevalence of MRSA in the community as well as in community-acquired pyodermas.[2],[3],[10],[12] In a series on community-acquired pyodermas from Mangalore, Nagaraju et al. reported that 11.8% of strains of 202 S. aureus strains were methicillin resistant.[3] According to the National Staphylococcal Phage Typing Centre, New Delhi, there is an increase in the occurrence of methicillin-resistant strains of S. aureus from 9.83% in 1992 to 45.44% in 1998.[13] MRSA strains were more common in southern India (30.94%) than in the west (20.33%) or north (18.88%). Thus, it is likely that the prevalence of methicillin resistance in community-acquired S. aureus strains also varies in different regions. In our study, only one of the seventy strains of S. aureus (1.4%) was methicillin resistant. This low prevalence was probably because our study included only community-acquired primary pyodermas as against the earlier retrospective study where samples from hospitalized and OPD patients were received from all types of infections.

In our series, the sensitivity of S. aureus strains to other antibiotics varied. All the strains were sensitive to vancomycin and sisomycin. They showed minimal resistance to first generation cephalosporins and gentamicin (1.4%). Resistance was greatest to penicillin (87.2%), followed by that to erythromycin (42.9%) and framycetin (35.7%), an antimicrobial used for topical application. Resistance to ciprofloxacin was 17.2%. In other studies too, an increasing resistance to erythromycin is being observed.[3],[13],[14]

The emergence of antibiotic resistant strains poses a significant problem both in community as well as hospital practice in deciding empiric therapy. It is therefore important to monitor the changing trends in bacterial infections and their antimicrobial susceptibility patterns. Studies like the present one help in establishing the etiological agents and deciding empiric therapy from time to time. The increasing resistance observed to framycetin and erythromycin limits their use as first choice antimicrobial agents. In patients with primary pyodermas, cephalosporins and penicillinase resistant penicillins (e.g., methicillin, cloxacillin) can be considered as preferred first line systemic therapeutic agents. Similarly, the first choices of topical therapy for primary pyodermas are probably gentamicin and sisomicin rather than framycetin. However, we have not been able to check the sensitivity of these isolates to some other popular topical antibacterials like sodium fusidate, mupirocin and nadifloxacin as our study was focused on the frequency of MRSA strains. In spite of this drawback, our findings indicate that it may probably be unnecessary to use antibacterials useful for MRSA strains on a routine basis for the empirical treatment of community-acquired primary pyodermas. However, these findings need to be confirmed by a larger study.