A 11-year-old boy presented with two progressively enlarging nodules over the left breast of 1 week duration with signs of impending ulceration. He had no fever, night sweats or weight loss (B symptoms). The lesions ulcerated the following day, discharging a profuse amount of blood mixed with pus leaving a large ulcer over the upper medial quadrant of the left breast which spared the nipple-areola complex [Figure - 1]. The ulcer was freely mobile and had well defined, irregular, rolled out margins with hyperpigmented borders and a fleshy floor. An enlarged lymph node was found in the left axilla which was non tender, mobile, firm and had normal overlying skin. Systemic examination and investigations were carried out with the provisional diagnoses of pyoderma gangrenosum, subcutaneous mycosis and cutaneous tuberculosis, and revealed no abnormalities [Table - 1]. A fine needle aspiration cytology from the axillary lymph node demonstrated very cellular smears comprising of highly pleomorphic large cells with abundant deeply basophilic cytoplasm and large, single to multiple pleomorphic nuclei with fine chromatin and single to multiple nucleoli. These features were suggestive of anaplastic large cell lymphoma (pleomorphic histiocytoid lymphoma) or polymorphous subtype of immunoblastic lymphoma. Many of these cells had multilobulated and eccentrically placed nuclei. A large number of mitotic figures, some with a bizarre appearance were also noted. Histologic examination of the skin biopsy specimen from the ulcer also showed features suggestive of primary cutaneous anaplastic large-cell lymphoma [Figure - 2],[Figure - 3],[Figure - 4]. Immunohistochemical studies revealed CD30+ large cells [Figure - 5] that stained negative for CD20, CD8, CD3, CD4 LCA, pan CK and anaplastic lymphoma kinase 1 (ALK1) favoring the diagnosis of primary cutaneous anaplastic large-cell lymphoma (Stage 1). Studies for chromosomal abnormality or epithelial membrane antigen (EMA) expression were not performed as they were unavailable/unaffordable. Further investigations revealed no evidence of any systemic disease [Table - 1]. He recovered completely after treatment with the pediatric oncology group protocol 842 chemotherapy without significant adverse events [Table - 2]. There was no recurrence in the more than 5 years follow-up period. 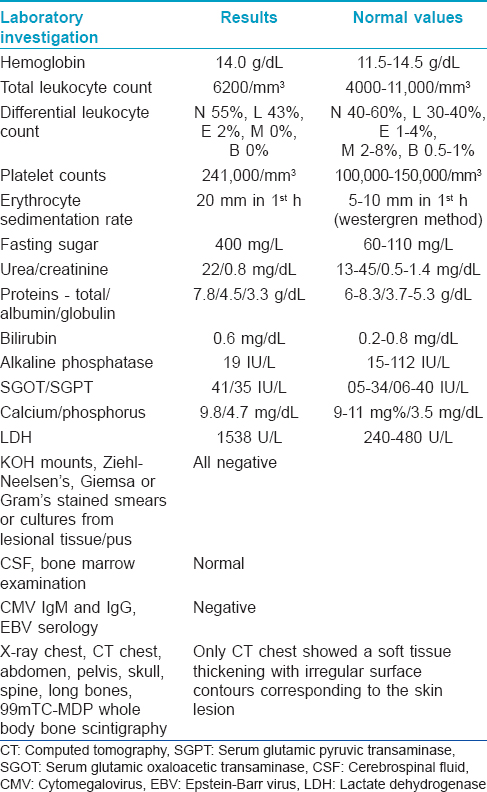 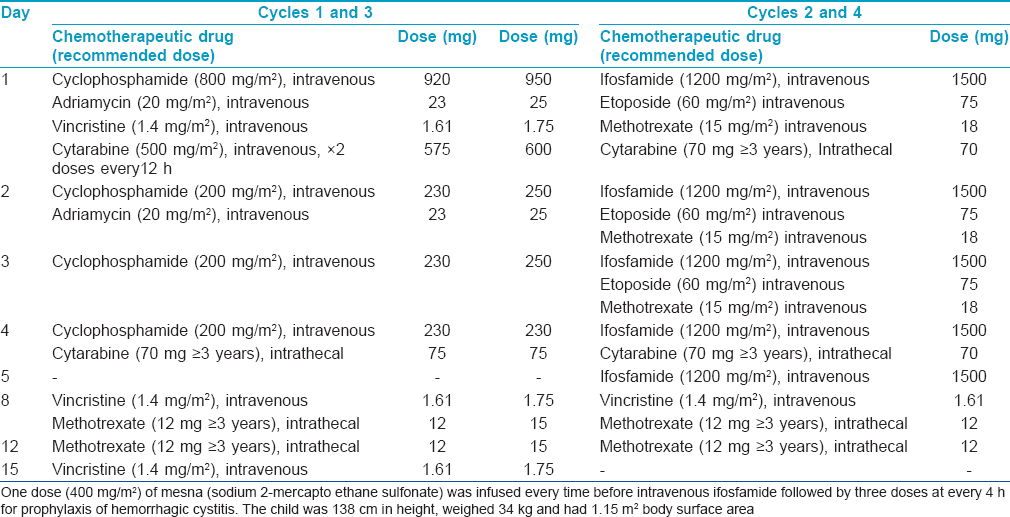