© 2021 Indian Journal of Dermatology, Venereology and Leprology - Published by Scientific Scholar
Licence
This is an open-access article distributed under the terms of the Creative Commons Attribution-Non Commercial-Share Alike 4.0 License, which allows others to remix, tweak, and build upon the work non-commercially, as long as the author is credited and the new creations are licensed under the identical terms. 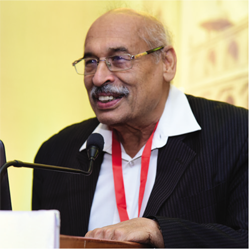 Prof. Ashok Kumar Bajaj (A. K. Bajaj) was born in erstwhile undivided India (now Pakistan) in 1945. His family came to India after the partition and settled in the Panipat district of erstwhile Punjab (now Haryana). After his schooling, he joined and completed his MBBS from the Medical College, Rohtak and then did his MD in dermatology from the All India Institute of Medical Sciences, Delhi. In 1973, he joined as a Lecturer (dermatology) in the department of medicine at the Moti Lal Nehru (MLN) Medical College, Allahabad (currently named Prayagraj).

Because of his hard work and perseverance, he succeeded in carving out a separate and independent department of dermatology, venereology and leprology at the MLN Medical College which earlier used to be a part of the department of medicine. His academic interest and passion for contact dermatitis saw him work tirelessly to make it popular among Indian dermatologists, as well as easy to interpret and understand. Even with limited resources, he worked in this field for many years and developed the science of contact dermatitis in India and he has often been referred to as the Father of Contact Dermatitis in India.

Prof. A. K. Bajaj was not only a very popular physician but also a dedicated researcher, a keen sportsman, part-time Urdu poet and above all an extraordinary mentor to young dermatologists all over the country. However, his most defining quality was none of these. In our opinion, that would be his ability to wear lightly all his varied accomplishments in life. Never short of a self-deprecating joke or a funny couplet, he was an expert at lightening the mood at many a dour scientific meeting or heated academic argument.

His warmth, approachability and generosity of spirit made him an extraordinarily popular mentor to academic and practicing dermatologists alike. He was forever on the lookout for young talented dermatologists and had an unerring eye for identifying and nurturing their innate abilities. He unselfishly shared his vast clinical knowledge and especially his passion for contact dermatitis with newly trained dermatologists, who flocked to him for practical experience before starting their own practice. He was probably the only dermatologist in the country who was considered a mentor and teacher by legions of young dermatologists, without ever having been a faculty of a postgraduate dermatology department.

The most remarkable quality that Prof. A. K. Bajaj had was his ability to recognize and nurture the one stand-out quality/talent in a person, whether it was academic flair, organizational skills, or leadership potential.

We had the privilege of being spotted by him, some of us even during our MBBS days (RS) to become what we are today. That is all because of his futuristic vision, wisdom and guidance.

The word “dermatologist” was synonymous with Prof. A. K. Bajaj for the last 5 decades not only at Prayagraj but also in the neighboring cities, districts and states. He must have been visited by at least one member of most families of Prayagraj for one skin problem or other during his almost 50 years of practice as a dermatologist.

He was a perfectly balanced man with discipline for everything in life, be it his clinic, academics, or sports (he was a very good tennis player). He used to enjoy his leisure time mostly with his family but, at times with colleagues which he used to call his “chaupal” (a place where people gather, discuss and relax).

His wife, Dr. Sarita Bajaj, is currently the Professor and Head of the department of medicine at MLN Medical College, Prayagraj. She is a renowned academic endocrinologist with special interest in diabetes. They have two loving and caring daughters and both are happily married.

Prof. A. K. Bajaj might not be physically here, but he will always be alive in our hearts. He has left many an everlasting impression in the hearts of many. His demise is a great loss to those who were close to him and to the Indian dermatology fraternity.

We should try our best to take IADVL and Contact and Occupational Dermatoses Forum of India to the highest levels, remembering his words that he had uttered in one of the conferences:

“It’s sad when people who gave you so many memories become memories.”

(The roads on which we happened to be together once, Ask me time and again: Where is your master?)