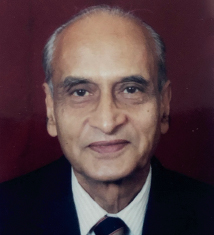 He received a Colombo Plan scholarship to work at the St John's Hospital for Diseases of the Skin, London and conducted research and completed Ph.D. under the renowned mycologist Dr RW Riddell, before becoming a renowned mycologist himself and was appointed to St. John's Institute of Skin as Faculty. On return to India, he immediately disseminated this knowledge around Indian medical schools as a member of the Syllabus Committee of the Medical Council of India.

His contributions to public health will be remembered as the initiator of the concept of camps, a way of solving problems in rural areas where most of the population lives. At one of these camps, he identified yaws in a remote tribal region in Gujarat. Later, he joined Dr. Arvind Lonkar, another legendary dermatologist, in identifying Parthenium hysterophorus as a hazardous weed especially on railway tracks surrounding Bombay.

He also did much to support leprosy charities in Gujarat with the training of medical and paramedical workers. He was a member of the WHO Expert Advisory panel for sexually transmitted diseases for several years during which he travelled across the globe.

In the 1960s and '70s, when it was not common to travel as a visiting professor to Western departments, he travelled several times to countries in Europe and USA. In 2005, he spoke to a large audience at an International Conference in London and lamented that the traditional knowledge and wisdom of people residing in rural communities are neglected and ignored. He collaborated with ayurvedic practitioners and established an evaluation of Cassia fistula and Neem. He went on to request a greater understanding of the systems of governance in village communities and Gandhi's view of self-government he supported. Especially, he and his wife Prof. Amita Verma, an educationist and a proponent of women's empowerment, spoke enthusiastically about the need for women in village panchayats. He was proud of and wrote of India's development with many changes for the better taking place, “a backdrop against which one has to contextualize the health problems of India.”

Dr. Verma was one of the first dermatologists to be awarded the Fellowship of the National Academy of Sciences in 1972. In 1983, he was appointed for four years as an Honorary Dermatologist to the President of India. He was appointed consultant dermatologist to the Indian armed forces and also helped to revise their pharmacopeia. He was also awarded the coveted B.C. Roy award. With so many contributions to the health of India in the profession of Dermatology, he was invited to deliver many orations and awarded life membership of many medical societies and associations. He was active in the Indian Association for the Study of Sexually Transmitted Diseases (IASSTD) and was the President of IASSTD in 1984. The Indian Association of Dermatologists, Venereologists and Leprologists awarded him the title of “Teacher par Excellence” in Bangalore in 2009 where I was present. Though I am not aware of the exact number, he was a teacher and examiner to hundreds of dermatologists during his almost 40 years of teaching and more than 60 years of private practice.

It has been a privilege to meet Bhanu Verma on many occasions, even a month before his death when I visited Vadodara. He was a voracious reader and read everything from spirituality, religion to fiction and humor. Few knew of his lifelong passion for music, swimming and zeal for learning new skills that included learning to fly aircraft at a relatively advanced age.

He was not only a great dermatologist but truly a perfect gentleman, and we shared a passion for many aspects of 'skin care for all.'